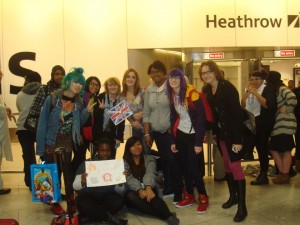 November 1st marked the arrival of SHINee onto British shores, via Heathrow Airport. SHINee will be in the UK for a few days to kick off the London Korean Film Festival with a short performance before the screening of the Kim Han-Min film War of the Arrow on Thursday, November 3rd.

This is the same SHINee concert that infamously turned into a ticket-fiasco with Shawols and K-pop fans shutting down the (usually reliable) Odeon servers. Despite what the Korean media has said, Odeon isn’t the largest chain of cinemas in the UK (that title goes to VUE) but it is the most prestigious, as all our big movie premieres are held at the Odeon in Leicester Square. Name any Hollywood movie star, I can guarantee they have been there.

Shawols also took it upon themselves to make an official airport greeting party for SHINee. I looked at the event on facebook and I had to chuckle at this particular point:

“PLEASE don’t scream at them excessively as that’s just unpleasant, not just for SHINee but everyone else at the airport! We don’t want to cause trouble or be thrown out! It would be much nicer for them to hear fans singing to them after such a long, tiring flight. We’ll sing the chorus of ‘Hello’ and then a gentle fan chant :) Will organize it properly at the airport!”

Many people RSVP’d to the event and promised not to cause a scene. But as you can see with this video…

…that notion was lost as soon as the Shawols saw their idols in person.

Obviously enthusiasm is great to see, but when it turns into mass hysteria it becomes a problem. Rebecca Strachan, who not only attended the event but is the creator of the Facebook event was hit in the head a few times by crazy fans all wanting to get a piece of SHINee. She is the infamous girl who got pushed in front of Taemin (by a bodyguard) and fell onto Jongyun causing him to stumble a little.

The event seemed to have cause such a disturbance amongst fans, that other Shawols have set up a ‘Sorry, Sorry SHINee’ page on facebook posting pictures with messages like, 샤이니 죄송 합니다 amongst others. 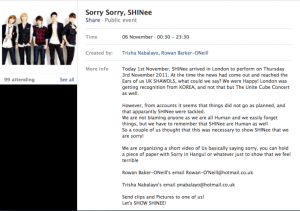 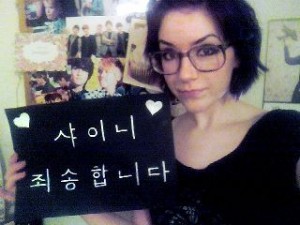 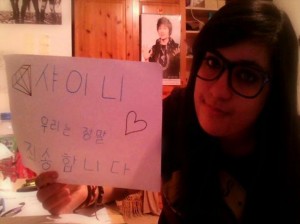 From looking at other Facebook pages and Twitter feeds, there is a huge debate whether it was as bad as it seemed. Either way, this is good publicity for SHINee and K-pop in general and hopefully it will give us more of a chance to have a full SM Town concert here. I’d just like to see, for once a bunch of fans act in an organized manner and not get to a point where they resort to trampling each other just to touch their idols.