Brown Eyed Girls: The Metamorphosis of a Girl Group

You have a voice. How are you going to use it? Sitting in the sun…in a world meant to break our hearts exhausted we sang songs, told stories and laid brick….spelling out our own private resistance. Feel, Watch plus Sixth Sense. 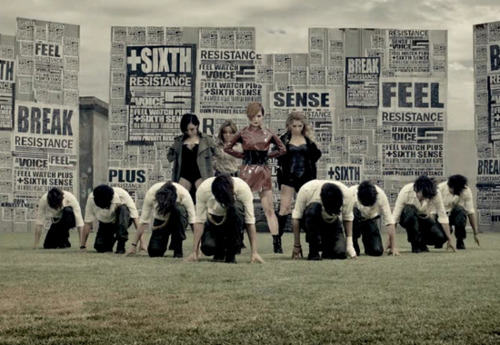 All are phrases posted across makeshift walls like propaganda. In the music video’s final scene, Brown Eyed Girls (along with their militia of back up dancers) stand their ground as a totalitarian-like army charges towards them. A triumphant metaphorical cliché if I ever saw one, but how has this fierce and provocative girl group found success in an industry that prefers the docile and innocent.

Despite the commercial failure of their first two albums, Vol 1 Your Story (2006) and Leave Ms. Kim (2007),  the Brown Eyed Girls are one of the few idol groups to debut in 2006 (along with Big Bang) that has yet to have issues with member replacement or show any intentions of disbanding. Their resilience as a group and musical versatility has kept them from completely going under even when debuting during Kpop’s transition from R&B to dance, and even after the Wonder Girls’ “Tell Me” trumped their promising single “You Got Me Fooled” drowning out their second attempt.

With their single “Love”, off their mini album With Love (2008), the Brown Eyed Girls finally put their foot through the door. Without making any radical changes to their urban/feminine image or the use of a gimmicky concept, they crossed the threshold of households across South Korea by means of a catchy beat, chill melody, and simple music video.

Yet, it was with the release of their third album Sound G (2009) and the controversial music video to their single “Abracadabra”, that they made their breakthrough. Considering that they had portrayed themselves as strong women up until this point in their career, the image of independent and mature girls prevalent in 2009, wasn’t new to them. Neither was the dark undertone previously used in the video to their biggest hit off With Love, “How Come”.

The success of their third album initiated their debut in Japan earlier this year, which in the Korean music industry is only the first step towards globalization, and we all know that that’s what brings the real bread to the table as is so evident with groups like KARA and 2NE1. BEG’s fierce, dark and provocative image along with their assertive nature and level of talent has aided them in a business that seems to be ruled by groups like SNSD and the Wonder Girls. In their ongoing effort to define themselves, with the aid of their management’s direction, which, in some cases, closely resembles dictatorial governance, their defiance against being sweet and docile hasn’t always been overt. With their fourth album Sixth Sense, BEG has reached their full development as a group, which is impressive considering that they’re in their late twenties—an age group when Korean girl groups typically disband. Then again, endurance and adaptability aren’t subjects covered during training, but attributes that evolve with the unfolding of a career.

Having reached their “peak” and approaching their 30s one may question if their status as the fiercest girl group in Kpop may be one they’ll soon leave behind but, for an adult idol, with age comes freedom. The freedom to express themselves without the criticism or limitations characteristically placed on younger idols who are still under the guidance of their entertainment companies. Also, reaching a certain age doesn’t imply losing your following or fierceness it is just another life stage. Whether doing solo activities or as a group, the Brown Eyed Girls surely will always remember once rising their “own private resistance” and, as inspired by Shostakovich’s Leningard Symphony No. 7, Sixth Sense will symbolize a girl group’s defiance against an image that just didn’t interest them and an industry that can be a oppressive as a totalitarian state.