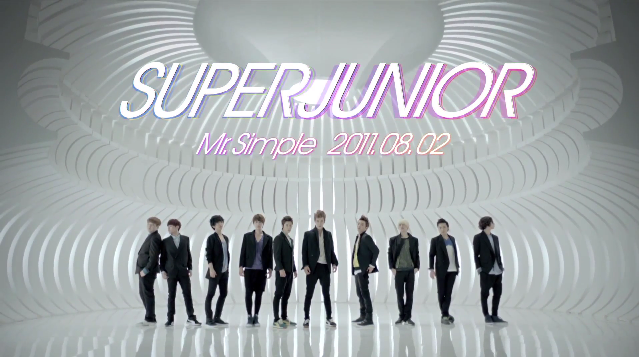 The boys are wearing grown-up man clothes, the color scheme doesn’t remind me of Mike And Ike candies,  and Leeteuk is wearing one pair of underpants. We’re safe, guys! We’re safe!

Super Junior shocked the K-pop world when they released teaser photos for their upcoming 5th album. I was just about to give up hope after I saw that Sungmin had a blinged-out gun in his pants and Eunhyuk‘s hair had been bleached to oblivion. But the thing with SM teaser photos is that they oftentimes look really atrocious at first glance, but the resulting concept isn’t half bad. Just look at SHINee‘s “Lucifer.”

And judging from this recently uploaded official MV teaser, it looks as if the actual concept might actually be pretty…okay. Everyone looks fantastic, and everyone is wearing blazers. I die.

However, it should be noted that SM has a history of producing teasers that look and sound nothing like the actual song. In this case, I’d venture to say that what we’re seeing is what we’re gonna get…but not what we’re hearing. According to SM, “Mr. Simple” is a song with “aggressive choreography.” Although I’d take the teaser song over anything that can be described as “aggressive” any day, it looks like the actual “Mr. Simple” song will sound a little more like this seventeen-second preview from this week’s Inkigayo:

I’m not really a fan, and I probably won’t be even after the full song is released. As with “Bonamana” and “Perfection,” Super Junior’s recent songs have taken a really long time (as in, months) to grow on me. But the important part is that the songs do grow on me eventually, and with K-pop in the state it’s in, that’s all I can ask for.

Super Junior’s 5th album, Mr. Simple, will be released for online purchase on August 2nd, 12AM KST. The album will feature 13 tracks, as well as Super Junior-M‘s “Perfection” as a bonus track. Additionally, SM will also release a second “Mr. Simple” teaser before the album officially drops later tonight, so be sure to keep an eye out!

UPDATE: SM has finally uploaded the second teaser! Check it out below:

There’s not much to say that’s already been said, save for two things:

1) I hope the actual song sounds more like this teaser than what we heard in the Inkigayo preview, and

2) IS THIS SEXY OR IS THIS SEXY. I haven’t been this excited about K-pop since I saw Changmin shooting up bad guys in the “Before U Go” teaser. Don’t disappoint me, SM.