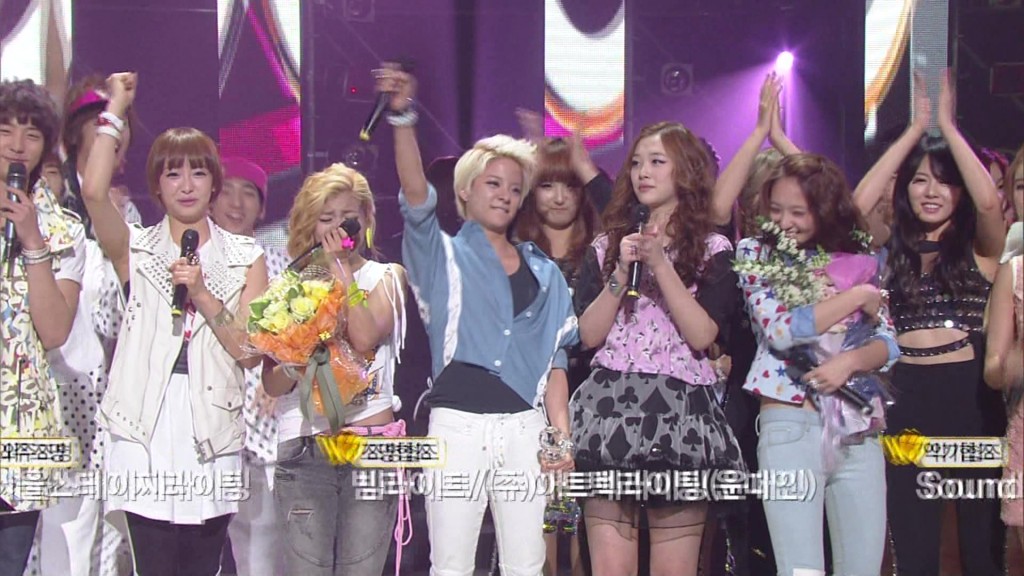 Man, guess Episode 601 just isn’t as climactic as the 600th episode, right? This week’s show features comebacks by After School and Eru, as well as a new promotional single by CNBLUE. Oh, and girl groups. Lots of them.

B1A4: “O.K.” – There’s just something so endearingly weird and weirdly endearing and I just can’t put my finger on it. They’re wearing pink visors, for goodness’ sake.

Turtle: “Hero” – This group really sprang back after losing a member due to a fatal heart attack three years ago. “Hero” has that old-school peppy K-pop sound to it, and is an excellent pre-weekend, Friday song. You know, as opposed to the obvious alternative.

Rania: “Dr. Feel Good” – Um, what’s with the extra lip synching in this perf? I know they’ve changed the outfits in order to comply with broadcasting regulations, but what the eff are they wearing in this perf. Infant bodysuits should not be worn by anyone other than infants. (The dancers’ outfits, on the other hand, look phenom.)

X-5: “The Show Is Over” – This group’ styling is unusually polished for their debut. I mean, when was the last time we’ve seen a boyband debut in anything other than horrible ethereal fashion? (Or maybe the ridiculous choreography is supposed to make up for it. Can’t be too classy, after all.)

Kim Jong-min (feat. Jaekyung from Rainbow) – “Cheer Up, Man” – The Koyote member is back, plaid suit, avvies, and all. Y’know, I was just listening to my parents’ old Taiwanese oldies cassettes the other day, and this song would’ve totally fit right into their collection. Take that for what you will.

NS Yoonji: “Talk Talk Talk” – Four weeks of this song and it’s finally grown on me. Brb, going to get me some espadrilles and brightly colored socks.

Eru: “Countrified and Immature” – Was not aware that ‘countrified’ was an actual word, but yay! Eru! Cue the obligatory 40-piece, white-clad string orchestra!

A-Pink: “I Don’t Know” – I feel like this group should be performing in a Times Square storefront at around Christmastime. Like, an animatronic version of them in Santa hats or something. Nope, still don’t like them.

Brave Girls: “Do You Know” – This is growing on me as well. Their singing still leaves a lot to be desired, but I think that this song would be so much more effective if the choreography was…meh, I don’t know. Better.

Rainbow: “To Me” – I think I actually made a dress in the seventh grade that was somewhat similar to Rainbow’s stage outfits. No offense intended; it was a damn good dress, if I may add.

Girls’ Day: “Twinkle Twinkle” – Who told this song that it could come back to the stage?! The chorus is okay, but everything in between is just…bad.

After School: “Let’s Step Up” – I used to tap in high school, so I was especially impressed with this performance. Really wish that the tapping wasn’t dubbed over for most of the perf, but what can you do.

After School: “Shampoo” – Finally After School is back to show all those rookie girl groups how it’s done. I’m not all too impressed with “Shampoo” on the whole, but bad song or not, this performance was rock solid. They might be clad in delicate-looking white rompers, but the performance was still punchy.

CNBLUE: “Love Girl” – I see you boys really dressed up for the occasion. Although it is really nice to see K-pop performers wearing normal people clothes for once.

f(x): “Danger” – Thought that I would hate this song since the first teaser came out, but whaddaya know – it’s been my jam for the past week. This song really translates to the stage better than I had anticipated. Also, lol at the mic and monitor battery packs in the back pockets of their skinny jeans.

4minute: “Mirror Mirror” – Song has finally grown on me, awkward-sounding hook and all. Man, if I keep watching MuBank every week, everything‘s going to grow on me. My music tastes are already horribly unrefined; don’t do this to me, K-popland!

f(x) wins K-chart for the week, making this their first MuBank (and first music show?) win ever. Tears are a’flowin’. Everyone is adorable. Want to pinch Amber’s cheeks, omg.

Other performances from this week’s episode:

ALi: “I Tried Everything“