The holiday season is a poignant time for reflection; the year is coming to an end, and we can’t help but look back, to see how much has changed in our lives. Christmas, for many, is one of those important markers, where we remember who we once celebrated with, and those who might no longer be gathered around the family tree. Each year, there’s joy, nostalgia, regret, and hopefully a lot of love.

To celebrate the season, Taeyeon has released her special winter album Winter is Coming – This Christmas. While there’s plenty of festive fun to be found on the rest of the album, its lead single “This Christmas” plays to the more melancholy side of holiday nostalgia. Taeyeon looks back on the Christmases of her past and laments taking the love of someone she held dear for granted. On the screen, this relationship is conveyed through vignettes of a father and a daughter as they drift apart through the years.

There’s a reason the concept of children and parents drifting apart is an easy go-to to tug at heart strings: growing up is largely universal experience that no one does perfectly or without regrets, even in the most loving of relationships. In the MV for “This Christmas” we watch the wintery memories of childhood alongside Taeyeon through the vantage point of a passing car window. Taeyeon plays spectator to her own memories as she rides through a snow storm, remembering the good, the bad, and the painful that ultimately pulls her back home for another Christmas.

The scenes begin happy, a father and his small daughter sharing milk and cookies, cuddling under blankets for bedtime stories, and the pure joy on both their faces when the father presents his daughter with a new bike for Christmas. These are the good memories one never forgets — not the parent, not the child — even years later. 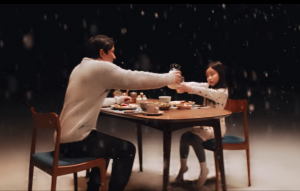 After several winter storms, the times change. Taeyeon looks on as a now teenage daughter shrugs off her fathers invitation to join him at the dinner table. Where there once was happiness in each other’s presence, the daughter now sits outside in the snow to avoid arguing with her father and hides under her blanket with her cellphone — shutting him out. We don’t know what has caused the dramatic change in their relationship, but it’s easy to just chalk it up to life. Parents and children grow apart, teen angst and parental rejection turns households cold in the darkest moments of winter.

Their cold war climaxes in a moment that’s even too painful for Taeyeon to want to remember. The father chases his daughter in the snow, attempting to wrap a scarf around her neck, when he is coldly shoved off. In that moment, we feel his confusion at the rejection, we see the regret on Taeyeon’s face as she realizes the pain he’s feeling. In the frustration and anxiety of youth, it’s easy to miss how much we hurt those who love us the most, and those crucial moments of change are something we don’t realize until years later.

Suddenly, there’s a flurry of snow and Taeyeon stands inside the abandoned sound-stage home. The memories play quicker, blurrier, as her vocals become more powerful. She’s looking for something, seeking out the comfort that once was there in the arms of her father — the man who’s unconditional love she misses.

The real emotional core of the MV comes in this moment of realization and longing. It’s easy to forget that as we grow up, our parents age with us; that some day they might not be there to tuck us in and turn out the night light. Where there’s nostalgia, there’s also regret in those small moments we lashed out, and brushed off those who loved us. There’s a need to return to that comfortable place of love, and the warm embrace of those who care about us. That’s what Taeyeon is seeking to do both in the song and the MV: to make amends, and return home.

We all grow up, and at some point in that growing up process, there is an inevitable shift from the relationship you had with your parents as a small child, and the one you take on later in life. With time, the caretaker becomes the one being cared for. These shifts happen subtly, as shown in the MV. Where one moment it’s the father tucking his small daughter into bed, and the next it’s the daughter covering her father with a blanket on the couch. The next, the father is nowhere to be seen and Taeyeon is alone in a blizzard.

Christmas, when you were here, Merry Christmas
I’ll give you earnest heart that I thought would last forever
I pray on This Christmas

Like in life, the snowstorm does eventually clear. After the bittersweet journey down memory lane, Taeyeon’s car finally arrives at it’s destination: a beautiful Christmas tree, and her aged father smiling beside it. Despite everything, there’s still joy in the greeting, and relief in Taeyeon’s smile as she gazes out the window. The storm has settled, she’s finally home.

“This Christmas,” finds it’s emotional core in the nostalgia of the MV, and the strength of Taeyeon’s vocals. While the images on the screen are minimal, and somewhat conventional, it’s their subtly that gives them power. Much like with Taeyeon’s singing, there is nothing that feels gratuitous or over-done, instead the MV relies on tiny moments and simple gestures to convey the complicated love between a father and a daughter. Really, that’s no easy feat, and for a relatively un-promoted single, SM’s done a decent job of providing a relatable narrative on screen.

It doesn’t really take a markedly “Christmas” song to achieve such emotional results, but it’s not entirely inappropriate for the season, either, as the holidays often bring families back together. As far as Christmas tracks go, I wouldn’t call “This Christmas” a new classic — ballads rarely inspire me to put on my festive sweater and cuddle up with hot chocolate — but it’s definitely earned it’s place as the emotional, vaguely Christmassy track of my 2017 K-pop playlist.