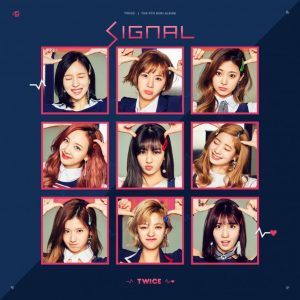 It hasn’t even been 3 months since “Knock Knock”, but the ladies of Twice are back again. Their new EP and single, both entitled Signal, are a clear shift in Twice’s sound. Until now, they’ve been the queens of candy-cute comebacks, releasing high-energy single after high-energy single. Signal takes them out of that comfort zone in a clear attempt to prove that Twice has emotional range or vocal skills, or something to offer than being cute and peppy. Sadly, though, the only thing that Signal proves is that taking risks can crash and burn.

People always like to challenge artists to break out of their comfort zones, but it’s often forgotten how zones become comfortable in the first place — it’s where their strengths lie. Twice is comfortable, and indeed, excels with catchy, simplistic songs paired with maddeningly crazy choreography, both of which have the energy levels of a cheerleading team on meth. In other words, they’re performers. Their greatest asset is their ability to connect with their audience. Like most performers, though, Twice is often viewed as lacking technical singing skills.

This is where Signal comes in. It is clearly designed to flaunt the technical abilities of Twice; to prove there’s more to them than the adorable girls we’ve seen thus far. The instrumentation is sparse, and the songs are crafted with higher notes and need for Twice to fill the production with powerful deliveries. This is a platform for Twice to show their technical abilities. But here’s the problem: they don’t have them. 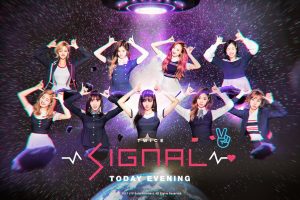 I’m sorry to be so blunt, but the cold, hard truth is that Twice is seriously lacking in the technical department, and all Signal does is make this impossible to hide. The album is bursting with nasally singing, thin vocals,  and valiant but futile attempts to hit notes so far out of their ranges they might as well be on Saturn. They don’t have the power to fill out the mix on the house-influenced “Signal” and “Three Times A Day”. They don’t have the emotional capabilities for the acoustic “Someone Like Me”. They don’t have the harmonies that could turn “Only One” from a decent-ish b-side into a single. The best song is easily “Hold Me Tight”, because it’s a peppy, high-energy song that depends on attitude and vocal color to work.

The production certainly doesn’t help matters any. “Hold Me Tight” is inoffensive fluff, and the Ha:tfelt–penned “Only One” is passable, but that’s it. “Signal” is a shining example of “too minimal”, as 85% of its instrumentals are a bassline that is both rubbery and sour. “Three Times A Day” is horrendously layered, and each layer sounds like a different melody. “Eye Eye Eyes”, more than anything, sounds like a less good “Hold Me Tight”. The one song with outright good production is “Someone Like Me”, because it’s Hailee Steinfeld’s “Starving” before Zedd got his claws on it. Unfortunately, all that means is that “Someone Like Me” makes me want to listen to “Starving”, because if nothing else, it has a singer with the vocal power and emotional range to fill out the track. 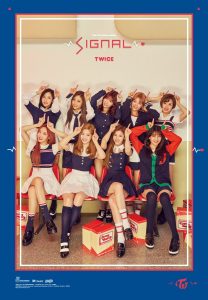 Let me be abundantly clear on two points: Signal sounds terrible, and I do not like being this mean about Twice’s vocal skills. They’re young, and they need practice and time to reach the pinnacle of their vocal abilities. I want to give them the benefit of the doubt, but Signal has made it impossible. By placing Twice’s vocals front, center, and under a spotlight, I have no choice but to point out that better singers could have turned this into a competent but not awful release.

They are usually signing from the throat rather than the diaphragm, which makes everything sound nasal and weak. They’re struggling for notes, causing them to sound unstable. Their inability to harmonize means every group section comes off like a horde of cheerleaders appearing from nowhere. Worst of all, their energy is going into attempting and failing to perform technical songs above their skill level, meaning they can’t interject their lines with attitude and personality, which is what they’re best at, vocally.

To the ladies of Twice, all I want to do is give you a hug and reassure you that you are better than what Signal makes you sound. To JYP, how could you be this cruel?