K-pop Indie Gem: Walking After U 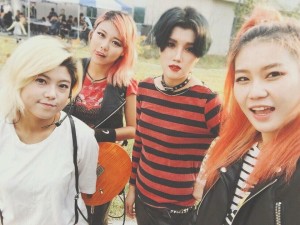 If you miss Paramore circa 2006 or just miss early 2000s emo rock in general, this week’s Indie Gem is for you. Walking After U is an all-girl quartet that formed during the Girls Rock Festival. Before coming together as one unit, Walking After U was originally two separate bands, Rubber Duckie and Swingz. Both bands frequently played similar festivals and concerts so when they collaborated for the Girls Rock Festival, it felt only natural for them to become a single unit.

The band is made up of Baek Hae-in on bass and lead vocals, Song Jia on guitar, Sunny on keyboard, and A-zzang on drums. Hae-in has a distinct raspy voice that makes her sound like a singer from the 90s. It has the same quality that F.T. Island‘s Hongki’s voice when she extends the notes.

On top of her great voice, Hae-in is a great bassist, creating bass lines that compliment Jia’s guitar riffs. Jia is clearly an accomplished guitarist; even in Rubber Duckie, she shreds like a hair metal guitarist. Combined with Jia’s insane technical guitar skills, Sunny’s keyboard rarely is ever overpowering or nonexistent. True to their genre, the keyboard is used to help emphasize key moments within the song. A-zzang’s drumming is the steady rock for each of their songs. She’s able to create powerful rock beats that bind the band together.
[youtube https://www.youtube.com/watch?v=T3DgkHJtvt4]

They currently only have one MV out (for their single “Blind”), but it’s a pretty solid representation of the kind of music and aesthetic Walking After U is going for. Most of it is in an abandoned warehouse with a few exterior shots. It’s grimy in the way most emo music videos from the early 2000s were, even including the trademark spotlights in the background during the climax of the song. The song itself also has many of the usual trappings of emo rock, most notably the guitar chug as a transition. Their rock attitudes shine through in the MV; the main impression is this is how they perform and that this is who they are as a band. 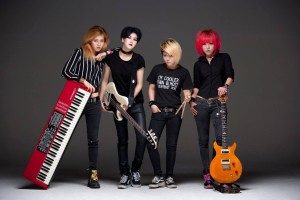 Walking After U is incredibly well-put together. It’s not an easy task to combine two bands into one and make it work, but Walking After U does just that. They only have two albums out: their debut album “Unleash” and their brand new album “Running Wild.” Judging from their Facebook and YouTube pages, the band likes to focus more on playing live shows rather than recording and increasing album sales.

The majority of their YouTube page is videos of them live with the exception of a couple interviews and tour update videos. They’ve been extremely active in Japan; they have toured there pretty consistently since their formation in 2014. Now that they have a new album out, though, it seems like they might be gearing up for a Korean tour before heading back to Japan. 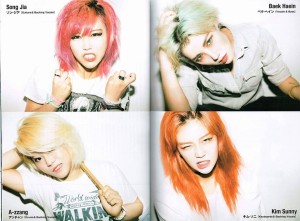 While they are definitely talented, there isn’t much variety in their music. Each song follows the formula for a typical emo song, with little variation. While having a distinct sound is fine, taking that sound and developing it is what makes people stay fans.

However, they only have one album that’s readily available since their new one was just released. Maybe with their new album they’ll explore some different sounds or at least incorporate some new influences. I would really like to hear them do something closer to a ballad, potentially like “Divine Intervention” by Taking Back Sunday, since Hae-in’s voice is so expressive. I think it would be a nice change and to hear her really get to explore melody with her voice.

Listening to Walking After U is a great experience and they’re a fun band to listen to if you’re missing being an emo kid in the early 2000s. Since they’re still relatively new, the potential for them to expand and grow musically is very much there. So if you’re looking for a new rock band to support, look no further than Walking After U.