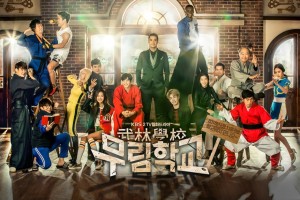 Moorim School‘s seventh and eighth episodes continues with the same atmosphere as the previous six episodes, but now the plot has gotten more complex. So much happens in these two episodes that it is amazing how easy it is to keep track of everything.

The full extent of the backstory is revealed when Chae Yoon (Shin Sung-Woo), the man in a coma, wakes up. It turns out he was the original successor for the Moorim Association, the group that runs the school. There is some tension between him and Hwang Hyun-Joon (Shin Hyun-Joon), the dean of the school–Wang Hao (Lee Beom-Soo), Chi-Ang’s father, wants to play them against each other in order to get the treasure that he believes is somewhere in the school.

We find out this treasure can only be found once the three pieces of a key are reunited. Hyun-Joon has one piece and it’s assumed that Yoon has one as well. Through a series of flashbacks, we see how Hyun-Joon and Yoon used to work with each other, and we’re led to believe that at one point they may have been friends and had a falling out. While Yoon believes that perhaps it was Hyun-Joon who put him in a coma, we see him saving one of Yoon’s children from a fire, a child that is revealed to be Soon-Ah. The other child is Shi-Woo, or so the show heavily implies.

In addition to all this backstory and drama, all the students and teachers take a trip to Seoul to relax after mid-terms. They’re given free time to go explore and enjoy not being pent up in the school. The only student who is not allowed to leave the hotel where everyone is staying and that’s Soon-Ah. She’s even given a tracker to make sure she doesn’t leave. This is of course easy for her to slip by simply asking Soon-Deok to wear the tracker for her so she can sneak out of the hotel dressed like Soon-Deok. We get to see the other students exploring their old neighborhoods.

The seventh episode focuses heavily on the developing relationship between Shi-Woo and Soon-Deok. Shi-Woo is shown caring for Soon-Deok after she injured herself during an exam helping him. Soon-Deok’s giddy interactions with Shi-Woo and his quiet nervousness around her make for adorable scenes between the two of them. By the end of episode seven they’ve shared their first kiss, a sweet kiss in the music room after Soon-Deok gets too nervous to give Shi-Woo the music book she bought for him. It’s sweet how it happens, and her reaction to run away as fast as possible is understandable. She ends up trying to avoid him as much as possible, overanalyzing everything about that night. Watching her try to decipher what it all meant and what it means to her is amusing. Seo Ye-Ji embodies the nervous energy that her character has well and uses that line between exaggeration and too campy to her advantage.

Unfortunately, Wang Chi-Ang is still pining after Soon-Deok, leading to a fight between him and Shi-Woo. Chi-Ang feels betrayed that Shi-Woo went behind his back when he knew how Chi-Ang feels about Soon-Deok. This feeling of betrayal is doubled because Soon-Deok tells Chi-Ang she feels burdened by his advances. Instead of just reconciling himself to the rejection, he tells her that his propositions are only going to get more elaborate.

The scene where Shi-Woo tries to talk it out with Chi-Ang is well shot, with it being clear that Chi-Ang holds all the power in the argument. He breaks a glass with his hand and punches Shi-Woo after he tries to remind Chi-Ang about how he is his first friend he’s ever made. The whole thing is very over the top and over exaggerated, like Chi-Ang himself. It heightens the anger that he’s feeling and the regret Shi-Woo experiences. After their fight ends, Chi-Ang storms out, and ends up running into Soon-Ah dressed as Soon-Deok. He mistakes her for Soon-Deok and takes her away to a bridge overlooking the city. He begins to sincerely confess his feelings for Soon-Deok, but before he finishes, Soon-Ah reveals his mistake. This leads to them spending time together and becoming closer.

Meanwhile at the hotel, Soon-Deok is dressed as Soon-Ah, walking around and thinking more about her kiss with Shi-Woo. The two end up meeting and Shi-Woo tries to talk with her about how she feels about the kiss. She gets nervous and heads to the restroom to calm down. However, as she’s heading out, one of Wang Hao’s cronies kidnaps her, mistaking her for Soon-Ah. Hao believes that Soon-Ah holds one of the pieces of the key because of information he received  from one of Hwang Hyun-Joon’s closest friends at Moorim.

When Soon-Deok doesn’t return, Shi-Woo gets worried and searches for her. He calls Soon-Ah and by extension Chi-Ang to help him find her. Since she is wearing the tracker for Soon-Ah, they’re able to find her quickly. Chi-Ang and Soon-Ah arrive first, frantically searching for their missing friend. They unfortunately arrive too late, running into the last of the kidnappers. A fierce and well choreographed fight ensues between Chi-Ang and the man, while Soon-Ah goes to try and find Shi-Woo.

While all this is happening, Shi-Woo is trying to make his way to where Soon-Deok was. However, because of his idol status, he’s swarmed by fans in the street and the pain in his ear returns, rendering him completely useless. As he’s struggling, Yoon approaches and helps him. Shi-Woo asks him if he’s a part of the Moorim Association which surprises Yoon. But before Shi-Woo can ask any other questions, he disappears into the crowd. 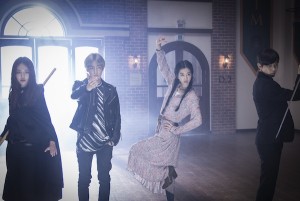 Shi-Woo arrives in time to see Soon-Deok being taken away. He chases after the kidnappers’ car and successfully saves Soon-Deok. However, Chi-Ang is injured in his fight against the kidnappers and during the very last moments of episode eight he is rushed to the hospital.

Hongbin stands out the most in these two episodes. Chi-Ang switches between goofy and serious so much that if he struggled to convey these two extremes, it would not be surprising. But Hongbin is able to handle it, expressing the pain that Chi-Ang feels when he’s rejected again and again by Soon-Deok. When he’s fighting with Shi-Woo, he delivers his line, “I thought for the first time I had made a real friend,” with such venom and hurt, that the audience is convinced of his suffering.

There is so much happening in these two episodes. It felt like watching at least four episodes of any other show instead of just two. The writers did an excellent job making sure it was all easy enough to follow. Some of the flashbacks did feel like an information dump, but overall the episodes smoothly move from scene to scene without any loss of information. The sheer volume of plot that happened in these episodes suggests that it might be caused by the shortening of the series, which would make sense. The writers need to move the plot along faster so they can wrap it up by the sixteenth episode.

Moorim School is able to maintain its charm with these two episodes. Hopefully the fight scenes will become more frequent, since the one with Chi-Ang was excellent. The fact that they packed so much into each episode is a bit overwhelming; now that all the backstory has been revealed, the show should start to need less exposition. I’ll continue watching, if not for Lee Hyun-Woo, to at least find out how everything turns out.