IU Creates a Wonderland in "Twenty-Three"

South Korea’s sweetheart IU is back with her new album CHAT-SHIRE, and the accompanying MV for “Twenty-Three.” In this, IU cleverly retells the story of Alice in Wonderland, adapting it to her own life story. Thematically, the song has some similarities with other coming-of-age songs such as Song Ji-eun’s “Pretty Age 25,” but also explores new territory.

The MV opens with IU blowing out the candles on her birthday cake, before promptly passing out face-first into the cake, a reference to Alice being poisoned in the original story. This then begins her journey through an alternate world, where IU questions identity, reality and honesty.

For all the people who say that IU always sticks to her musical comfort zone, “Twenty-Three” proves them wrong. IU experiments musically, adopting a disco-esque sound rather than her previous jazzy or acoustic music.

The true strengths of this song, however, are its lyrics and themes. Having written the lyrics herself gives the song a new kind of intimacy and relatability, particularly for young women who are treading that fine line between childhood and adulthood. IU muses on the duplicity of humans, identity and reality, constantly teasing the listener throughout the song. IU’s coy singing paired with her almost blank facial expressions means she’s hilarious and charming to watch in this MV. 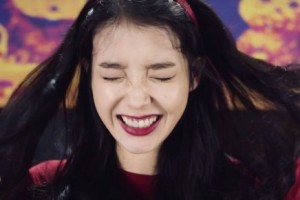 Throughout the song, IU questions her identity and others’ true identities, all the while messing with the listener. IU presents the listener with contradictory descriptions of who she is, always following it up with “Try to guess, which one?” First, she tells us that she wants to remain a child, but then quickly says she wants to be a woman. Then, she sweetly says she wants to fall in love, before contradicting herself with “No, I want to make money. Try to guess which one?”

In this way, IU demonstrates that no one, including herself, will ever work out her true identity, because “You cannot tell with my face, making an opposite face expression. The heart is really simple.” The audience is taken for a ride, unsure of whether to trust her. With all of this, IU is cleverly commenting on the nature of her industry, where people are always trying to dissect and interpret every part of her, reaching vastly different conclusions.

IU continues to make the audience doubt her by singing “At first I never wrote even a single line of lies,” hinting that now, she lies quite regularly. Clearly, turning 23 and eating the tainted cake has robbed her of the innocence she started her career with.

Turning 23, for IU, is the transition between childhood and adulthood, where you are still able to dabble in a little bit of both. She sings: “Trust me moderately if I pretend to be a grown up” and then “If I pretend to be immature, please be fooled a bit,” meaning that no matter what identity she adopts, she still has the power to trick others as that identity is not 100% her true self.

Of course, IU is not the only manipulative person out there. She makes fun of how two-faced other people can be, wondering whether the woman who smiled at her as she passed “Is still smiling after going around the corner?” We are often so eager to please others, IU notes, that we are happy to be dishonest in the process. 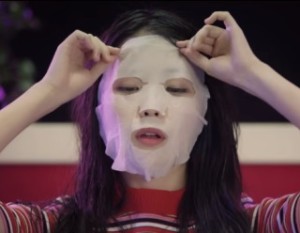 The themes of identity and celebrity life are further explored when we see IU modifying herself in different ways, such as covering her face with a sheet mask, or applying lipstick. This can be representative of all the different roles or masks she is expected to put on as part of her job in the public eye, and also all the interpretations that other people feel entitled to place upon her. IU shrugs this off, singing that she’s used to being seen “through sunglasses”, which don’t present reality in its true form.

IU also teaches us not to judge based on appearances. One scene shows IU’s silhouette puffing from a cigarette, but then quickly reveals itself to be completely innocent: IU was just blowing a party horn. Later, IU sings “I want you to like me: can I be nasty a little? I want you to like me: can I be on top of your head? Try to guess,” indicating that she wants to get away from the ‘good girl’ image she has always been labelled with. Having turned 23, we see IU stuffing her top with apples, demonstrating her transition to becoming a woman. She turns to a mannequin, perhaps for its opinion, only to be rudely flipped off by the toy. Clearly, IU feels as if audiences are often hostile to the fact that she’s just naturally growing up.

When reading into the lyrics, it’s also likely that IU is taking a stab at the netizens who feel entitled to judge her and claim that they know the ‘real’ IU. Some militant netizens called IU a fox after her SNS scandal with Eunhyuk, so it’s likely that the lines “Pretend to be a fox that pretends to be a bear that pretends to be a fox” have some link to this incident. Here, she makes these netizens doubt her innocence, but ultimately brushes off their accusations as she’s used to being misinterpreted by the public.

The netizens are also two-faced, she points out, bragging that “There’s nothing I’m afraid of. Even if act rudely, people are always kind to me.”

All of this talk about manipulation and identity fits well into the whimsical Alice in Wonderland theme of alternative realities and nothing being like what it seems. IU delivers all these confessions in a completely unapologetic way, which is not only extremely entertaining, but makes the viewer question whether she’s even being honest with us. 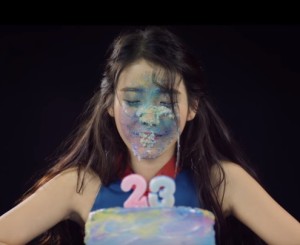 The MV does well to gradually build up to the acid-trip scene at the end, rather than assaulting the viewer’s senses. Since things gradually get more and more absurd, we almost don’t blink an eye as the madness progresses. This child-like wonderland gets the audience to think about whether becoming an adult necessarily means abandoning your childhood. IU, for one, decides to keep both parts of her identity.

The MV comes full circle as IU seems to snap out of her dream, lifting her face from the cake she initially collapsed into. She smiles softly, giving the impression that she feels at peace. The audience is reminded that you can never accurately judge others, and that you should go about your life despite what others think, because they’ll misinterpret you no matter what you do.

Rarely do you find songs that are so interesting to interpret, so relatable, and also so meaningful. IU is exploring new ideas in her music and bringing up interesting issues, which as we all know, is very much welcome in the K-pop industry. Another thing to consider is the MV’s release date, considering it was released on the 22nd of October — not the 23rd — is possibly another cheeky attempt by IU to tease the audience.