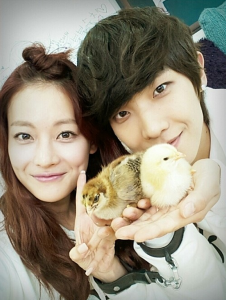 Seven years on, and We Got Married is still ongoing; blurring the lines between television and real-life, and igniting fans’ delusions. So far, it seems that WGM can’t go long without some sort of shocking scandal threatening to derail the fantasy the show plants in the fans’ minds.

Taemin lied about his relationship history, Oh Yeon-seo was allegedly two-timing Lee Joon, and now, rumours are rife that Hong Jong-hyun has been dating After School’s Nana for seven months. Although both parties have come out to deny the rumours, those who have been following this industry long enough ought to know by now that such denials, true or not, hold little weight.

The Jjongah couple (Hong Jong-hyun and Yura) is one of the more innocent and — dare I say — awkward couples to star on the show, mainly because of their young age and Jong-hyun’s incredibly introverted personality. He has received quite a lot of flak for being generally unresponsive and indifferent to Yura’s advances, especially when there’s only so much initiative a girl can take before it hurts her pride.

The backlash got even more harsh when rumours of his relationship with Nana broke out. Fans clamored for him to be taken off the show, since he’s not perceived to be fully committed to his relationship with Yura. He received further unwarranted criticism when a 15-second fancam gained traction, showing him merely walking ahead of Yura without waiting for her to catch up — More evidence of his “affair” and disinterest in his “wife”.

So here’s the big question: when celebrities sign the contract to appear on WGM, what exactly are they agreeing to? Is it enough to act as a couple only when the camera is running, or is a conscious change to their off-screen behaviour also part of the package?

While WGM producers generally avoid casting celebrities who are already in relationships to preserve some form of credibility in the couples, it’s quite ridiculous to enforce that the couples really be in love 24/7. However, agreeing to appear on WGM involves some sort of commitment to make the show as successful as possible, and thus blatant disregard for the on-screen pairing should also not be flaunted. The success of the show depends on the authenticity of the couple that then has the ability to propel ship fervor, but evidence such as a hidden girlfriend and fancams like the one above can substantially discredit the show. 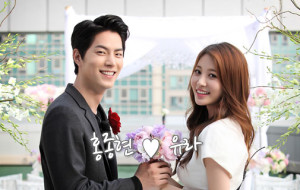 In order to maximize the feel-good factor from the show, there’s a certain way that WGM should play out, and that fantasy is part of the reason why everyone tunes in to watch. The editing of the show further distorts reality to reach this goal. Every sign of affection they show towards each other is immediately scrutinized and exaggerated to be this grand gesture, with the romantic music in the background to boot.

All of a sudden, we start to perceive WGM as an unscripted reality drama, where the characters are not detached from the actual person, but are expected to deliver our deserved happy ending. Anything that detracts from that is immediately slammed. It’s an interesting dichotomy that WGM couples are held to such different standards compared to say, actors in a drama. Yes, drama couples are more obviously scripted and set in an entirely different world, but in a rather similar way WGM’s love-lines are also forcibly scripted. They signed on to a pretend-relationship for a few hours per month, not a lifelong commitment to their partner.

Despite the impressive record that zero WGM couples that have actually gotten married in real life, fans still strongly hold onto the belief that the on-screen affections the couples have for each other are sincere and true — without thinking much about the warped, scripted nature of WGM. Many previous on-screen couples have stated that they completely lost touch with each other after the show ended, which naturally rocked ships and devastated fans.

Honestly, I stand behind the fact that the couples should try their best for WGM as they would in any other variety show, but the extent that they want the ship to sail is entirely up to them and not for the fans to dictate. It’s perfectly fine to be invested in the couples’ progression on-air, but if we do so to the extent of holding the couples up to a certain standard of faithfulness on and off screen, is that even a fair yardstick? 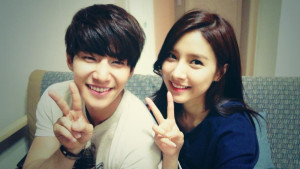 Another couple currently starring, Sorim couple aka LTE Couple (Song Jae-rim and Kim So-eun), also recently ran into a minor controversy. When asked if there was a chance she would ever date Song, her actual statement is as follows

It could never happen, it just couldn’t. We film once every two weeks and we’re too busy on days we’re not filming that we don’t keep in contact. I think it’d be very difficult to develop feelings in such an environment.

Can you hear shippers’ hearts breaking all over?

The Sorim couple is perhaps one of the most believable couples, because their chemistry and ease with each other escalated at such an unprecedented speed — hence the LTE moniker. Both genuinely seem to enjoy each other’s company, and thus it comes as a shock that it might all be an act. How do you reconcile such a statement with their lovey-dovey actions toward each other? Brain does not compute. 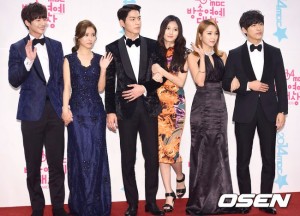 In truth, there are two realities. The real real reality, and the WGM reality. To the couples, these are two fairly distinct and compartmentalized sections. One is private and without restrictions, while the other is exposed fully on camera, peppered with silly missions and an appearance fee to go along with it. The gratification of the show comes from wondering how intertwined the two realities are, and unfortunate reminders to the contrary take away greatly from the squeal-factor of the show.

Yes, we can wish all we want that the couple is meant for each other, but does that give us the right to demand the couple act in a certain manner off-screen? Mind you, I totally understand the disappointment fans feel when a relationship scandals rocks a WGM couple’s plausibility, and while it might feel that they are being disloyal, we all came in understanding the mock-up nature of WGM. The fact that they actually have a personal life does not take away from the effort they put into WGM, just like how Jeon Ji-hyun‘s marriage doesn’t take away from her adorable chemistry with Kim Soo-hyun.

WGM producers want fans to believe that the two realities are one and the same; fans subsequently buy into it, but the couples have no such interest in fulfilling that belief. Chaos ensues. Indeed, where did it all go wrong? At the end of the day, there’s a very thin line between an invested viewer and a delusional viewer, and hopefully fans can learn where that line is.