A Sonic Adventure on From The Airport's "You Could Imagine" 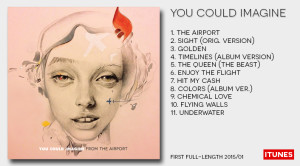 From the Airport has made their label debut with their first album entitled You Could Imagine. The indie duo was previously featured on Seoulbeats segment Indie Gem, and this album takes some of their older tracks paired with some new material to create a really cohesive electronic rock album. Always wanting to be an international type band, their songs have been made available for streaming on Spotify and for download via Itunes.

When asked about their name, the pair has mentioned that airports are “venues in which the people [of] the world cross paths.” They certainly have created an innovative electronic sound that is nothing like the typical EDM heard on top 40 radio. What we have here is rock in an electronically crafted universe. The duo takes a melody and distorts it, complicating the same patterns and adding subtle nuances to make the songs a sonic adventure. It doesn’t have the typical pop hooks nor does it follow an expected path.

For those unfamiliar with the band, members Milo and Zee met at an underground studio and shared similar musical interests, in particular the bands Coldplay and Dream Theater. They liken themselves to an ‘electronic Coldplay.’ Interestingly, Milo comes from a film music production background while Zee has worked in productions as a DJ. From the Airport combines melodic progressive rock guitar with varying electronic synths and beats to create dynamic and complex productions. The layered sounds are quite beautiful, and the songs are sung primarily in English – although they tend to sway more in the ambiguous territory.

The album starts with “The Airport.” It alludes to the journey the listener will soon take, building slowly, lacing together synths that pulse together. The band seems to revel in their cosmic world. There is a sublime quality about the introduction that sets the mood quickly – we are in for quite the adventure.

“Sight” gets going right off the bat with a driving rock riff over great drum beats. This song lyrically explores the visual:

The colors are dancing, above all

They can’t take this sight.”

The band utilizes certain shifts and progressions to inspire a feeling of awe. The idea of being under all these different types of lights and colors — from the skies or city — is embraced by the duo, and they embrace what they see – taking in all of the energy and freedom from it.

“Golden” features a heavier distorted bass at the beginning. The chorus has this breezy feeling before a short drum section gives way to the second verse. Throughout “Golden,” From the Airport keep our ears guessing. It is quite genius the way they incorporate these magnificent guitars to ramp up an emotional high in the song. The lyrics are a puzzling stream of consciousness:

“Surrounded by the grey smog

The gravity is pulling to the back of my head, my mind

Form that invite the heart of this strange road

Running straight, untwined, up to the seas.”

The band seems to drift in this metaphysical imagination that is grounded by observations based on the physical world. Sometimes, this can be alienating, but the whole experience is forgivable because the listener is taken out of body into a transcendent place.

“Timelines” is about moving forward and not being stuck. There is a metaphor about being in a space and returning to real lifeb interspersed with the notions of being left behind in a relationship between two people. It is full speed ahead from the get go, and at the climax this piercing synth section is uplifting. The track is great and definitely one where the lyrics stand out. 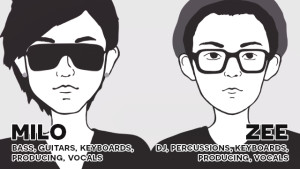 The next track titled “The Queen (The Beast)” may be the most rock number off the album. It’s this slinky gothic piece that reminds me of a more electronic sounding Muse. The guitar riffs and pulsating electro beat paired with the lyrics give the impression of power. In this case, it belongs to the titular queen, and the band paints an incredible story around her.

“Enjoy the Flight” is a call back to the introduction. We are back in the airport readying to takeoff. A funky guitar section drives nicely over the electronic groove. Small nuanced bits give the world texture and create this sensation of moving through space. The whole track is likened to the experience of flying with takeoff and turbulence all included. If my flights were set to the soundtrack of From the Airport, then it would be quite the exhilarating ride. Almost devoid of any words, this instrumental track has the duo jamming along – making the almost five minute long song go by in a blink of an eye.

“Hit My Cash” is a quirky little number. The lyrics at first listen seem to be about enjoying your Friday night. While not entirely about having fun, the band sieves through the shallowness of their Friday night romp and the cash that fills it, to search for a deeper meaning to life.

Was a stash, not a hash

Where is all the love?”

The lyrics later allude to their feelings on money as they rhyme cash and trash in an almost synonymous manner.

Next is the album version of their song “Colors.” The themes of lights and colored lines, which were featured in “Sight,” return here. The song starts off softly with a piano lead-in. Slight distortions kick the beat into gear as the track climbs up toward a climactic wall of sound. The band pushes that feeling of adrenaline by inducing a rush of endorphins that drenches “Colors” in euphoria. It is definitely a track that hints at their appreciation of the Coldplay sound dynamics.

“Chemical Love” is probably the closest thing to a ballad on the album. It has a mid-tempo electronic beat but begs to be sung along to — as it talks about romance and relationships to the science of chemistry. The sonic buildups in this song are phenomenal. For the patient listener, it strips away any pretense of a typically structured song with its mosaic-like production. At points in the song, the production strips down the instrumental for a guitar run before later pushing synths to fill out the soundscape during the height of the song’s emotional core.

“Flying Walls” lyrically showcases adversity in a naturally growing relationship. The guitars are joined by some strings and, of course, electronic set pieces to generate this sense of frenetic claustrophobia.

“See the flying walls rising up around me

The souls surround me

I come over to you

We were made to stay together.”

The walls become a maze encroaching on the space created between the two characters in the lyrics. Once a sense of claustrophobia, it becomes an article that leads them to believe they were meant to be together.

Lastly, “Underwater” closes out the album. This song is unsettling. The band sings about this sensation of going underwater and being unable to reach out to anyone. The instrumental is lighter on electronic elements, instead utilizing them as accents to the piano, guitar, and drum. The piano and drum are at times droplets of tension-building sound that resonate emotion.

From the Airport is amazingly talented. You Could Imagine is an experience that takes the listener through a creative world filled with love, emotions and quirky beats. The band has a unique sound straddling reality and outer space, as they use both their electronic elements and live instruments in intriguing ways. This first album is expressive and ambitious. The lyrics are filled with metaphors, and while that can be a bit difficult to dissect at times, these songs build a futuristic landscape where music can be filled with interesting melody changes, and sounds can come together in unique patterns to take the listener through new territory.