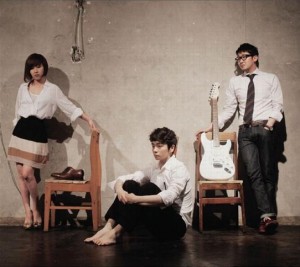 Urban Zakapa, sweethearts of the K-indie scene, are back with their 4th album, sequentially titled 04. The trio largely stick to their trademark soft acoustic style in this album, providing a medley of haunting, stripped-back songs.

The album opens with “Consolation,” a song which would work perfectly as the OST of a serious and emotional drama. The lyrics express the narrator’s desperation to console their loved one, suggesting as a last-ditch attempt to comfort them:

I can’t know all of your loneliness

But if I can wordlessly hug you

The melody is reminiscent of a lullaby, gently setting the tone for the rest of the album.

[youtube http://www.youtube.com/watch?v=yOHv5yjskJg] This is followed by “Self Hatred,” with the name itself suggesting its darker, more sinister nature. The MV for this song features up and coming actor Gu Won, providing an appropriately emotional video to the heart-wrenching song. The song features an intense build up and a hauntingly hushed melody, doing what Urban Zakapa do best, which is tugging at your heart strings.
[youtube http://www.youtube.com/watch?v=tAjvFyaBb0A] The middle of the album is where the strongest and most diverse songs lie, with tracks 4-6 being absolutely exceptional. In terms of pushing Urban Zakapa’s usual boundaries, two songs stand out in particular. The first of these is “Everyday,” one of Urban Zakapa’s boldest diversions from their usual style. It opens with electronic instruments and a gentle drum beat, demonstrating how to push mellow indie into an exciting new direction. “Everyday” sparks daydreams of enjoying long, lazy spring days outdoors, complete with generous scoops of ice cream. The harmonisation in the chorus is absolutely heavenly, but of course, this is one of Urban Zakapa’s most famous talents.

The next track, “Play,” takes this upbeat, fresh vibe even further. The cheeky feeling of the song is captured in the title itself, with it being a bouncy and fun tune to bop your head to. The screech of electronic guitar and thumping bass line grips you from the beginning, with the trio’s voices chirping happily throughout, even surprising the listener with some quirky vocalisations later on in the song.

The album’s sixth track is the sweet and relaxing “Like a Bird.” Although it is more similar to Urban Zakapa’s usual style, it retains a fun and fresh style, being one of the three strongest songs in the album along with “Everyday” and “Play.” The song has a gorgeous floaty melody, which one can imagine playing softly in an ambient coffee shop. The pleasant whistling and soft twinkling of piano keys is also amazingly soothing.

These three songs in the middle of the album unfortunately seem to be its only serious highlight. After this point, the songs take on a more haunting tone, causing a drastic drop in the listener’s mood. These songs include “In Front of the Piano” (which, unsurprisingly, does include piano), “Star,” “How to Send Away” and “Being that One Adult.” “In Front of the Piano” and “Being that One Adult” border on being screechy in their emotional climaxes, and “Star” and “How to Send Away” hardly seem to hit a peak at all.

Although Urban Zakapa is known for their extremely stripped back and often times sombre music, listening to these songs one after another either becomes boring or downright depressing. It gets hard to differentiate between the songs when they are all so similar, making it difficult to distinguish where one song ends and another begins.

There is certainly something to be said for consistency and creating a unique image for your group in the marketplace. This needs to be done carefully, however, to ensure that songs do not get repetitive and drab. The trio have shown what else they can do in this album through “Everyday,” “Play,” and the somewhat familiar “Like a Bird,” which are the songs that many listeners will continue to return to. Of course, there is nothing inherently wrong with mellow songs, as the cult success of “Cafe Latte” proved. However, there are only so many funeral ballads one person can take, and this album, unfortunately, included a few too many of those.