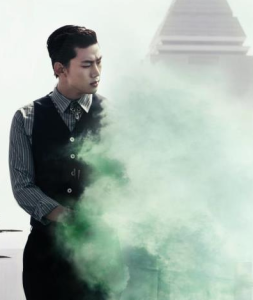 A lone figure sits at his computer, set on tackling injustice, 140 characters at a time. He unleashes anger over problems he sees, rather it be unfair praise by his own employer, or adults expressing their sexual desires.  If his typed words do not remedy the situation, then by golly, he’ll use the courts!  It sounds like a script for a humorous drama, but not in the case of 2PM’s Taecyeon.

Taecyeon has recently taken on the endeavor of pursuing legal remedies against sexual harassers. Thanks to a rather salacious conversation between two individuals on Twitter pertaining to certain parts of Taecyeon’s anatomy and biological processes, Taecyeon has declared he has had enough and will no longer stay quiet. In response, netizens are lighting their torches and brandishing their pitchforks. While initially eager to join forces with these crusaders, after a bit more reading, I retracted my claws and simply laughed at the over-dramatic situation.

First, curiosity is peeked by how Taeceyon even found out about the statements. Maybe there are netizen rats, scurrying around social media, to tip off their biases when something possibly problematic arises. It must be nice to have such a band of fighters for your cause. It reminds you of grade school, where friends would around and tell each other what other classmates are talking about. Or, more likely, Taecyeon enjoys searching his name to see what people are saying. That’s not remotely narcissistic.

Second, would not JYP Entertainment’s resources be better spent toward other things? Instead of wasting their money, time (and the court’s time), on such frivolousness, maybe the company should put it toward projects. Taecyeon would probably have less time to search his name if he was distracted by work.  Acting, and ‘OKCAT’ following him around, does not seem to be enough. Those scarce 2PM albums won’t release themselves. If not Taecyeon, then perhaps the company could handle the Wonder Girls situation, or better yet, bring JOO out of the dungeon. She hasn’t released anything in 3 years, and people now think she’s Ilhoon cross-dressing.

Third, there is a whiff of hypocrisy in this entire situation. Maybe I simply have more open friends, but since puberty, talking about the body parts of attractive people is common place. It is even more common amongst male counterparts. It is doubtful that Taecyeon has never said something sexual about a girl or boy’s body (whichever is his preference), especially to his friends. To even suggest that somehow these two girls are more wrong, is ridiculous. Also, lest we forget:

While his frustration is understandable, Taecyeon has overreacted in regards to the two individuals. The conversation was not directed explicitly to Taecyeon, even though he is the subject. In its simplest form, the conversation is two people expressing their sexual desires. While the two people could have been more tactful in expressing themselves, they do not deserve to have legal means used against them. It is rather difficult to even argue that the conversation constitutes sexual harassment.

Harassment, by its nature, needs to have some continuity and targeting. In this case, there is no reference to the individuals having repeatedly made sexual comments directly to Taecyeon (neither on Twitter, café, nor in person). If they have repeatedly made unwanted sexual advances and suggestions directly to Taecyeon, then by all means, Taecyeon should get the legal system involved. If it’s not the case, then Taecyeon should simply let the conversation slide and chalk it up to fans being perverted fans. JYP Entertainment has stated that Taecyeon has been sexually harassed for years, but it is unknown if the harassment involved these two people in particular. It is those other individuals who should be the target of Taecyeon’s wrath and authorities.

If there is one thing fans can learn from this, it is this: If you would not want certain parties to read what you have to say, it is best to protect your Twitter account and privatize your comments, as much as possible. Otherwise, you can face unintended consequences. In the meantime, let us hope artists do not actively look at tumblr or fan fiction.