Is It Love or Hate for Hyorin's First Solo Album? 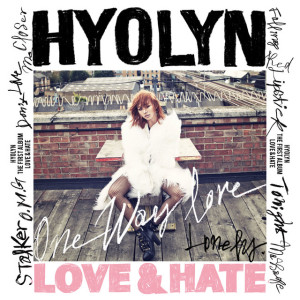 It seems common these days to find K-pop artists, who sing as part of a group, releasing solo material. These performers are usually popular on their own, and are also talented as individual artists. With this sure-win formula, entertainment companies are often generous to offer their star players solo releases. This brings us to a recent endeavour by Sistar‘s Hyorin. As one of the K-pop girl group sphere’s most prominent vocalists, it has struck audiences as odd that such a long time has elapsed between her group and solo debuts. Well, Hyorin fans, the wait is over.

Little criticisms can be made of her singing (duh), but to put things in perspective, a pertinent point would be the differentiation(s) between her Sistar performances and solo delivery. So, does Love and Hate live up to expectations? Read on to find out.

Starship Entertainment has chosen to ease listeners into Hyorin’s solo foray with a gentle guitar and drum driven track, and the mood of a starkly individual album can be felt. The instrumentals fade nicely into the background, allowing for Hyorin’s vocals to get all the attention. Very likeable indeed.

There was a good reason why this was chosen as the album’s promotional single: it teases with a sound that comes close to what we’ve been hearing from Sistar. By drawing comparisons, the song becomes a pro and a con; it’s easy to get into, but the tune sounds like a Sistar beat fronted by just one member. If there’s one thing good about this, it’s that Hyorin does a mean job of rapping. And I’ll leave you to draw your own conclusions on what this means for Sistar.

“Don’t Love Me” is a smooth, mellow tune that could be easily mistaken for the album’s opening number. Closer in nature to a traditional pop ballad, the song is given a husky tone with Hyorin’s trademark raspiness. “Don’t Love Me” conjures an OST feel as its pitching rises up the register.

Despite their differences, the collaborations in tracks four and five go hand-in-hand for me. “Stalker” is a mid-tempo track that has Mad Clown at the helm, and ad-libs as well as its chorus drive the whole song along. “Massage” features a laid-back, slow jam-esque vibe, where Hyorin is more in control of the song.

If I had to pick one over the other, I’d go with “Massage”, for it’s stronger R&B vibes.

The album dips into another ballad, with Hyorin’s vocals leading the way. She nimbly negotiates the highs and lows, proving once again that her title as once of K-pop’s powerhouse female vocalists is not for naught. “Closer” gives a hint of the motivations behind Love and Hate, but I’ll leave that for the wrap up ahead.

“Red Lipstick” casts a melodramatic landscape. Zico’s appearance is a pleasant surprise, as it provides further variance to the line-up. An evocative, story-telling type of song, “Red Lipstick” shows that a good tune is determined by its composition, as much as it is be judged by the vocals performing it.

If at this point, R&B fans have not yet been sold on the album, “Falling” might just bring them around. Hyorin swerves in with a mid-tempo ballad that swells and plateaus in all the right places. Take in all that “Hyonce” has to offer.

I like “O.M.G” for the same reason that I like “Red Lipstick”. The vocals don’t take precedence for me, but the overall composition does strike a good balance between engaging the listener and wearing him/her out. This is exactly my idea of a fun K-pop song.

“Tonight” is an interesting choice for an album closer. In retrospect, I might’ve expected a downbeat track, but was instead presented with a lighthearted listen. No complains there though, because the song rounds out an entirely rich album in a fun, poppy way.

If there’s one message to take away from Love and Hate, it’s that Hyorin is an extremely versatile singer, who’s able to cope with a variety of musical styles. However, I’m undecided on whether Love and Hate has delivered something different in the scope of K-pop, or served as a proper showcase of talent. Interestingly, the songs that I enjoyed most had lesser belting going on. I like how she’s gone with the flow of things and taken a different route to her usual Sistar act.

Readers, how are you finding Love and Hate? Tell us in the comments below!