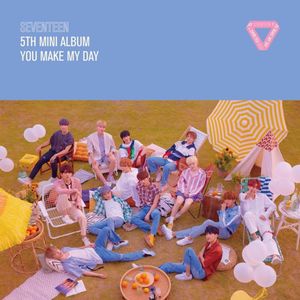 After a busy 2017, Seventeen has had a fairly quiet year, with a repackage of their second album and debuting in Japan. The fifth EP You Make My Day marks their first full comeback since last year’s Teen, Age, and it’s a solid release, but it lies in a frustrating place between relaxed and dull.

Seventeen is one of those groups that I am always aware of, enjoyed a track or two, but they’ve never really pulled me in. As a result, You Make My Day was a surprisingly tricky mini to fully sink my teeth into. If you have a solid pre-existing knowledge of their discography, You Make My Day feels like a logical continuation of their sound, but it’s a rough introduction. On my half-dozen listens, the relaxed vibe of the EP kept sliding in and out of boring, and it was only after a deep dive into their musical history that I was able to appreciate what Seventeen is doing here.

You Make My Day is assuredly a summer release, but a different breed of summer. We in K-pop tend to think of summer songs as bright, pop-y, and high-energy, tracks meant to soundtrack crazy adventures and bold choices. You Make My Day is the polar opposite. The release is low-key and low-pressure, meant for long days doing nothing and comfortable relationships with people you know and care about. 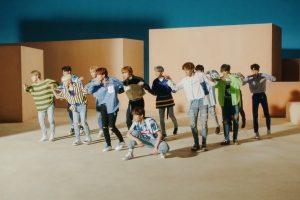 You Make My Day is very well named, as the lyrical themes that run throughout are based around the happiness that just happens when you’re with people you love. There are no extravagant promises here, simply the joy of spending time together. On the title track, “Oh My”, Seventeen is utterly lovesick, but instead of fantasizing about kisses and passion, they dream of sharing earbuds. Love here is the thing that gives the ordinary a touch of color.

This lifting of the mundane is carried on throughout the mini. Over and over, Seventeen extoll their crush object to just spend time with them, whether as friends following a breakup on “Come to Me”, dancing and laughing on tracks like “Moonwalker” and “What’s Good”, or exploring the possibilities of hot summer nights on “Our Dawn Is Hotter Than Day”. It’s the time and memories that Seventeen value and want to expand on because the memories summers spent with someone you love last for a lifetime.

The production and instrumentation are some of You Make My Day’s strongest elements, but it can be disillusioning. The EP covers a wide range of musical styles, from the EDM power ballad to wooden flutes. Yet, it’s all pulled together by a cohesive energy that keeps You Make My Day feeling relaxed and languid through it all. Even some of the missteps, such as the video game-esque synth lines of “Oh My” and “Moonwalker”, are minimized through the mellower tones and consistent chilled out vibe that Seventeen achieves. 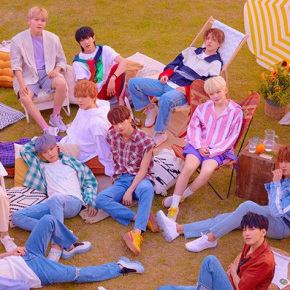 The issue with the production is that while You Make My Day is a perfect soundtrack for a blissed-out mindset, it’s not engaging enough to create that mindset on its own. If you’re already in the headspace You Make My Day was meant for– lazy days, doing nothing, living for the people around you– then it will sound incredible. If you’re not, though, it sounds dull and flat. There isn’t enough emotive power in the vocals or strong enough hooks in the instrumentation to engage an audience that isn’t already primed for Seventeen’s low-key style. Furthermore, the sound is so dependent on its place in Seventeen’s discography that it’s alienating. After three days, bingeing their entire body of work, I have a lot of respect for You Make My Day and feel it is a very solid mini. However, most people are going to be reluctant to do that much work for a lightweight summer release.

You Make My Day is, without a doubt, a respectable outing for Seventeen, and one that I suspect will only improve with age. That said, it can only hit its peak if you’re already prepared to enjoy it. Going in neutral, sadly, results in a much less satisfying listen.