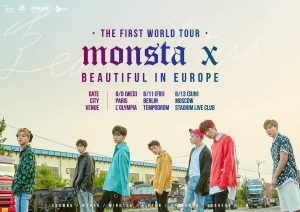 Over the past week Monsta X played three dates in Europe and I was lucky enough to attend their first European stop in Paris, France. The concert was held in L’Olympia, an iconic venue in the city for many big name acts. It’s not a large venue, making pretty much every spot inside a good seat. With general admission tickets, I was about halfway from the stage.

Before the show even began, people were doing the fanchants along to the title songs and singing along to the B-sides. It was obvious from the energy that this concert was going to be insane. The crowd kept up their energy from the very first song all the way through to the end almost two and a half hours later.

I’d seen Monsta X twice before this concert, both at KCon LA. The whole reason I checked them out was because of their opening performance at KCon LA 2015. Their charisma and dancing caught my attention and once I checked out the rest of their songs I was hooked. They’ve only improved their live presence since then. 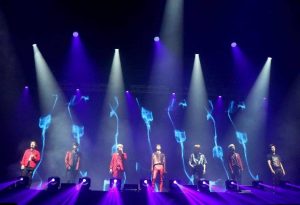 Seeing them perform in Paris felt like seeing the culmination of this growth. They engaged with the audience and performed with so much energy I’m honestly shocked they didn’t collapse after each song. The choreography was precise and powerful as fans have come to expect from Monsta X. It was hard to decide who I wanted to watch; each member was giving it their all. Getting to see the choreography for ‘Be Quiet’ in person was incredible. The dance break combined sharp moves with powerful gestures that matched the song really well. The little bit we got on broadcasts during ‘Fighter’ promotions does not do it justice.

My two favorite performances of the night were when they performed ‘Oi’ and ‘Ex-Girl.’ ‘Oi’ and ‘Ex-Girl’ are two personal Monsta X favorites, and quite unexpected to see Monsta X to perform them at the concert. ‘Ex-Girl’ was a bigger surprise since it’s a collaboration with Wheein from Mamamoo, but I was not disappointed. The setlist, which you can see at the end, was really well balanced between their title tracks and beloved B-sides.

The three unit stages were all engaging and showed off each member’s individual strengths (even if those strengths are Wonho’s abs and his dance skills). Unexpectedly, the stand out of the unit stages was Kihyun and Jooheon’s cover of ‘Mirror’ by Lil Wayne and Bruno Mars. Jooheon rewrote the lyrics in Korean and really showed off his speed rapping skills. I knew he could rap really fast, but during the bridge, he really kicked it up. Kihyun’s voice was perfect for Bruno Mars’ emotional tenor. He was able to hit all the high notes of the original and conveyed the same amount of emotion. I was left speechless after the performance and even after a week later I’m still raving to anyone who will listen about that stage. 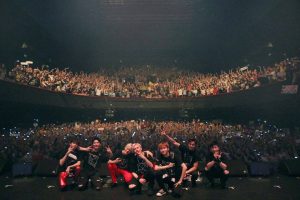 Overall, I’d say if you have the opportunity to see Monsta X live, you should take it. I had an idea of what I was going to get because of their KCon performances, but even with that, they were still able to impress me. Their next international concert is at KCon Australia, so if you’re in the area, be sure to check it out!

From Zero (Wonho and Hyungwon duet)