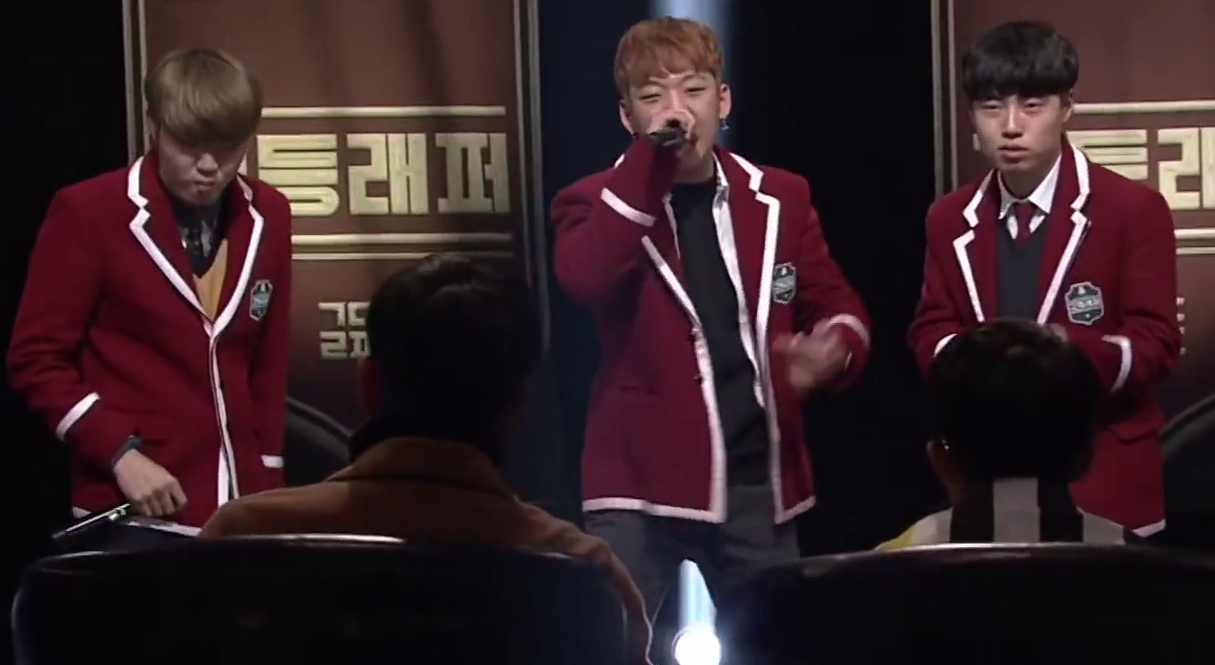 With the present hype surrounding hip hop, younger Koreans are looking towards paving a musical career in the genre. High School Rapper is a testament of such a statement. Mnet’s newest hip hop variety show started broadcasting on February 10, 2017. The survival programme pits high schoolers against each other through various forms of rap battles. Not unlike previous hip hop battle shows, it is a competition of skill and talents. Yet, I find the premise of the show itself quite unsettling in the commercialisation of an educational institution.

The auditions are conducted in six separate regions, namely Western Seoul, Eastern Seoul, Western Gyeonggi Province, Eastern Gyeonggi Province, Gwangju & Jeolla Province, and Busan & Gyeongsang Province. Contestants are called to give a performance that the audience vote for and the judges give a score for. The tabulated votes and scores make up each participant’s points. The top 9 contestants from each region proceed to the next round.

The auditions roll on through the first three episodes. These high schoolers come onscreen, parading their school uniforms during their auditions. The uniform as a form of solidarity and representative of an institution of education becomes flashed around like a fashion piece onstage. Consequently, each performance becomes an act of degradation towards an institution that values propriety and discipline. It seems unbecoming to try to brandish the school uniform in such a manner, especially when the genre of hip hop has been known for its criticism of society’s structures.

I appreciate the genre’s openness and its subversive tones because I do believe that antitheses are necessary for discussions and progress. Having these high schoolers swear their heads off in their rap is perfectly acceptable as a means of expression. However, for them do so in their school uniforms in front of an international audience inadvertently makes them appear amateurish. As much as I want to treat their performances seriously, I simply cannot do so while watching them exhibiting their school uniforms in such a manner. 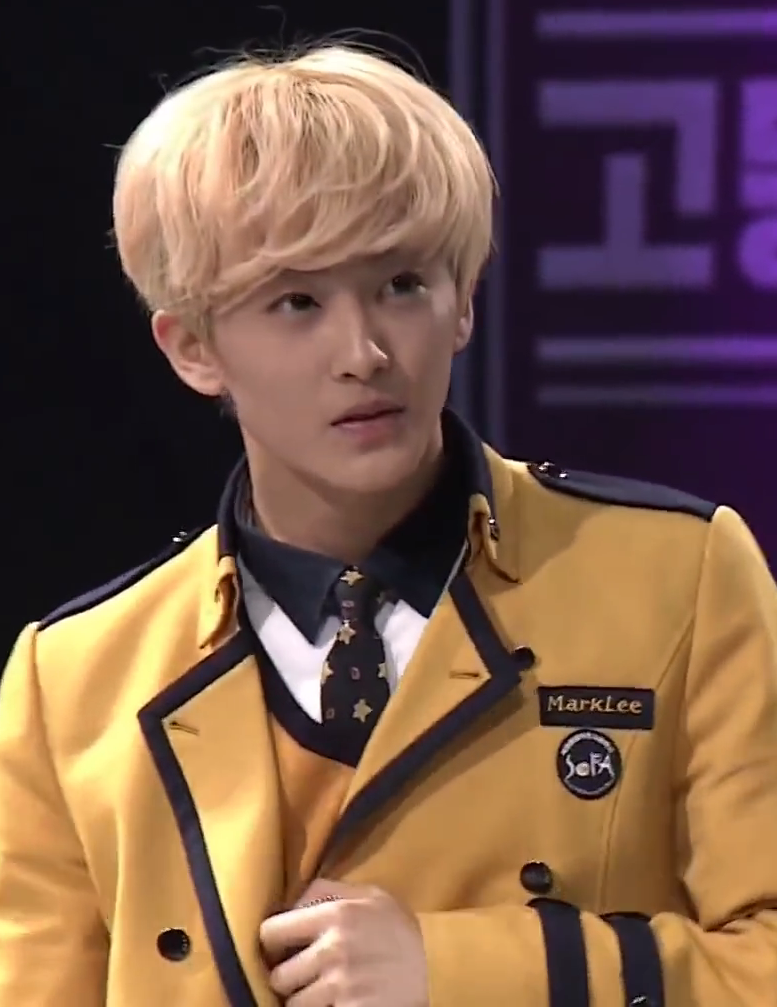 Furthermore, I see it as inherently problematic that these individuals have to represent themselves through their schools. If the spirit of hip hop lies in giving space to the individual’s voice, labeling them based on their region and their school resists the vision of hip hop itself.

It may seem that these contestants are donning their uniforms with pride and as representatives of their school. Yet, the societal implications become so much larger beyond the individual. The burden of each school’s reputation is on the sole individual. Representation also implies that these contestants act as ambassadors who cannot defile the uniform and institution they are representing. Once again, it goes against the values of hip hop in resisting having to be fit into a mould. The uniform acts as a convenient form of self-identity, but also brings with it limitations and boundaries that could catalyse conflict once broken.

Attached to the distinct uniforms of each school are also the stratifications of prestige. The yellow blazers of Seoul School of Performing Arts (SOPA) brings with it a host of expectations on its students. The school is the alma mater to many stellar idols – BTS’s Jungkook, Miss A’s Suzy, EXO’s Kai and many more. NCT‘s Mark is both a student of SOPA and a contestant in High School Rapper as well. School rivalry become a focus of the auditions between SOPA and Hanlim Multi Art School – indicators of a privileged education in the arts.

These individuals trained for the arts and possibly the entertainment industry are regarded in a different light simply because of the education they have received. It is ultimately an issue of stature and a tension between those who struggle to find a place as an artist and those who have the privilege of being groomed as one.

Consequently, participants who have dropped out of school are treated as falling out of the norm. The difference becomes amplified in the lack of a school uniform – a visual disparity that turns the spotlight onto the individual, especially since instructions were given for participants to come in their school uniforms. 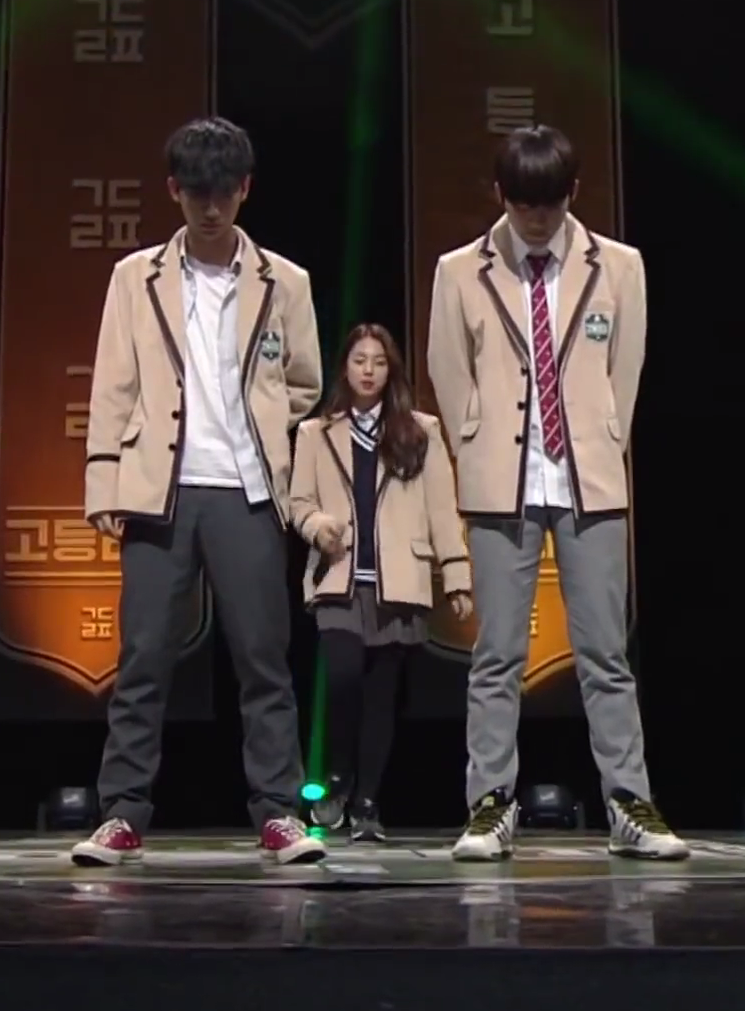 The attempts to recreate a school-like atmosphere, perhaps in reducing the high-strung atmosphere that is commonly seen in other survival programmes, breaks down. It is endearing to see these individuals, hopeful and passionate in chasing their dreams. Yet, the illusions of fulfillment shatter the moment they are thrust into the cruel world of the entertainment industry. It is ultimately the same dog-eat-dog competition even between teenagers. The fight for fame and for acknowledgement manifests as a cut-throat tussle to win each round.

Going further, the safe space that is supposed to be offered to each growing teenager is ripped away when mistakes become unforgiveable sins in the eyes of the public. Contestant Jang Yong-joon was revealed to be the son of Jang Je-won, politician of the Bareun Party. Subsequently, criticism regarding his behaviour on social media and in school started surfacing. They identified him as a school bully, rude to his own mother and his boastful comments that hinted at his participation in soliciting prostitution.

Jang Yong-joon and his father have both issued apologies since, with his father announcing his resignation from his political positions. The issue resolved itself with Jang Yong-joon pulling out of the show. However, he is not the only one that has suffered under the harsh gaze of the public. Yang Hong-won, better known as Young B, was also swept into a controversy regarding reports of school bullying, as well as underage drinking and smoking. He has expressed his repentance over his past deeds and will continue to be part of the show.

Both Jang Yong-joon and Yang Hong-won were praised for their rapping skills, but clearly talent is not enough to win some grace from the public eye. I do believe that, as teenagers, they deserve the room to make mistakes, be forgiven and learn from them. Rather, it seems that these two teenagers are forced to confront the criticism of society – in some ways forced to grow up too quickly.

Perhaps, High School Rapper is a way of allowing hip hop to be more palatable and acceptable in a society where its older generation is still fairly conservative. As hip hop continues to infect the younger generation with its novelty and liberal views, High School Rapper offers itself as a dream machine of sorts. It spotlights a platform where these young rappers can compete without having the pressure of more experienced rappers overshadowing them. 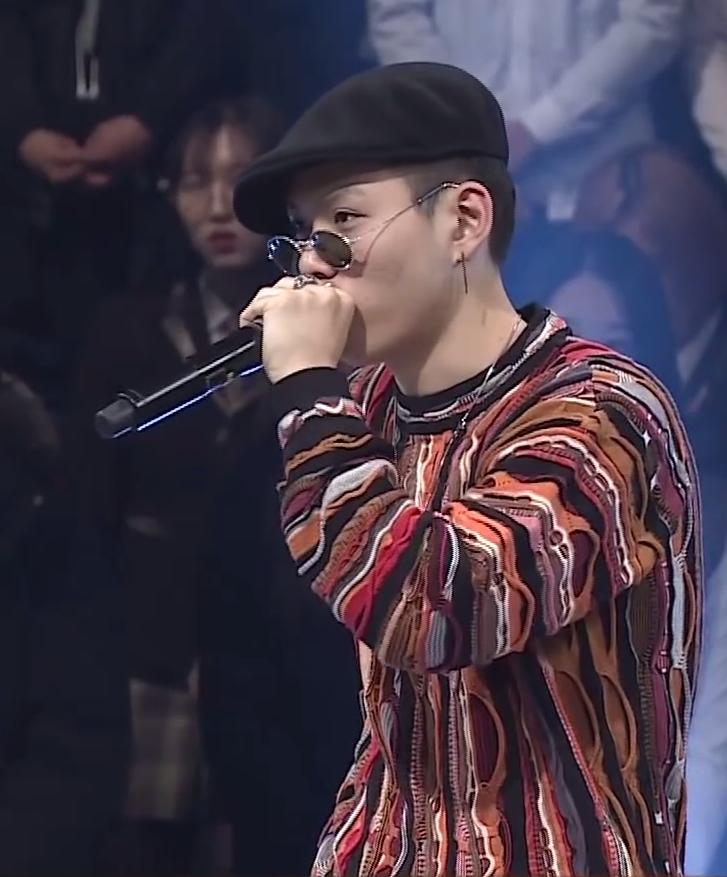 However, the dream machine is ultimately transformed into a nightmare of sorts as it tears away the safety nets of teenage life – be it the space for growth allowed within the school or simply the forgiveness that is deserving for an inexperienced teenager. The controversies that have surfaced are only the tip of the iceberg in my opinion. There are a multitude of issues that comes with trying to frame the variety show around the concept of high school.

Rather than terming it with regards to age, the show is caricatured around the assumption that each Korean individual’s experience of growing up is the same, and that teenagers will indubitably be students. It speaks of an unquestioning uniformity and overlooking of societal stratifications that might produce alternative life experiences. The entertainment industry becomes constructed as an “alternative” of sorts, an escape from a seemingly constrictive environment of the school.

The premise of the show attempts to function as some sort of fairy godmother-esque figure as opposed to the consequent image it constructs of the institution of school in relation to the entertainment industry, and the position it forces these teenagers to be burdened by. The propriety upheld by the school comes into conflict with the liberalism of hip hop. The high school becomes manipulated as a trope and a concept for entertainment, resulting in a derogatory treatment of school as an institution.

Ultimately, I watch for these talented youngsters deliver stellar performances – individuals shining with promise. Yet, I cannot help but feel their suffocation under these labels of schools and regions and everything that gets in the way of them defining themselves as artists of the new generation. The dream machine tears off half its mask to reveal a nefarious monster beneath.