Covers, Remakes, Tributes -- And All for What?

With recent articles talking about the phenomenon of fan tributes and compiling a wish list of English songs that K-pop artists should cover, it is quite obvious that we here at Seoulbeats are fascinated with the way one song can be reinterpreted multiple times. Rightly so, in my opinion, since a cover can tell the listener a lot about the person who performs it: whom do they want to emulate, what do they consider iconic, in which way does their interpretation differ from the original artist, etc. 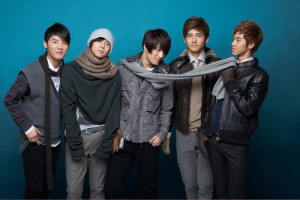 In this article, my intention is to focus on the ways in which idols create studio covers and why exactly they are paying homage to songs that might have been released before they themselves were born.

One possibility is for the company to choose one specific song to cover, which will be included amongst original songs on a regular or mini album. In SM Entertainment‘s case, this most notably has been done to introduce a band to the public. Examples for this are SNSD‘s cover of “Girls Generation“, on which even the group’s English name is based, and DBSK‘s cover of “Magic Castle“. Both songs were already popular before both groups remade them.

It stands to reason that SM Entertainment chose these songs for these specific groups because of two main reasons. First of all, both covers (and their corresponding music videos) were released within the first year of each of the bands’ existence. Presenting the groups to the audience with songs that were already well liked might seem like a more sure-fire way of eliciting sympathy than consistently trying out never-before-seen concepts and songs.

Now this approach could serve as a secure basis for the second reason — the establishment of a certain image for the group via the choice of the covers. In SNSD’s case, this would be the image of youthful, buoyant, but also shy girls; with the title of the song also reflecting the start of a new era which ties in well with their debut single “Into The New World”. DBSK’s cover of “Magic Castle,” on the other hand, once again solidified their image as a group with exceptionally strong vocals.

This pandering to the public to gain their acceptance can potentially also be seen with Jiyeon‘s latest release “Never Ever“. Although she has been a member of an established group before, this was her solo debut.

Before the song even came out, company representatives already called it “the 2014 version of the famed Park Ji-yoon‘s ‘Adult Ceremony'”. 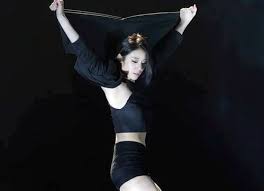 Watching the music video, it is quite obvious that at least the rhythm and the eerie feeling of the MV were inspired by “Adult Ceremony“. When one considers the dislike T-ara have received from the Korean (and international) public ever since their big scandal, it might have been a smart move on Core Contents Media‘s side to use a well-liked song as an inspiration for Jiyeon’s solo debut and to announce this fact so openly.

Yet, covering the occasional song or indicating that it has inspired the creation of an original piece of work is by far not everything that K-pop has to over. Some artists (or agencies) take paying tribute to an older artist to the extreme by releasing complete albums that only consist of covers.

The latest instance of this is IU‘s remake album Flower Bookmark, which is a compilation of older songs that IU cites as her, and notably also the public’s, favorites from the time in which they were created. In IU’s case, it is a bit more difficult to fathom the reason why LOEN Entertainment would allow (or order) her to release such an album. The change of her musical direction had already been made sufficiently clear with the release of her Modern Times album, so that could not really be the reason. And even before that she had frequently covered older songs on television shows and in concerts, so her interest in this kind of music would not be new to her fans.

But maybe that’s where the solution lies. Even though IU has stated that this album is a gift to her fans, that might not be the truth entirely. After her scandal with Eunhyuk and her new musical style, it is possible that some of her long-term (younger) fans could have left her. Releasing an album which solely consists of remakes of very popular older songs could be a way of attracting a new audience from a different (slightly older) demographic. 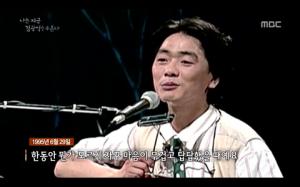 A special place among those whose songs are frequently covered surely belongs to one of South-Korea’s most beloved singer-songwriters, Kim Kwang-seok. An annual tribute concert with participants such as IU and Ali bears witness to his continuing popularity. His songs can also be found on a variety of remake albums, two of which shall be examined here:

The first one is a remake album which JYJ‘s Junsu released last winter in the context of his participation as the lead actor in DECEMBER: Unfinished Song, a musical inspired by Kim Kwang-seok’s music. The album Musical December 2013 with Kim Junsu is clearly a means of advertising the musical, but it also places Junsu in a line with this legendary musician he is covering. Moreover, it showcases the variety and range of Junsu’s voice, which is his most admired feature.

Another remake album dedicated to Kim Kwang-seok is ‘명불허전’ 김광석 다시듣기 (Listening to Kim Kwang Seok Again), on which a host of well-liked indie artists cover some of the singer-songwriter’s most famous songs. To me, this album seems like a genuine attempt to translate Kim Kwang-seok’s songs into the music of the 21st century. Indie artists like J Rabbit or 10cm were chosen since Kim Kwang-seok himself could be classified as an alternative musician. Released in 2011, this album might once again target a different demographic from the one that usually listens to the original music.

As this article hopefully manages to show, there are a variety of ways in which studio versions of covers may be released — all depending on what the agency or artist wish to accomplish with them. Their goals may be to get the public’s approval of an idol’s image overall, to open up new markets by targeting new age groups, or to introduce music considered as cultural heritage to a new generation.

What are some of your favorite tribute songs, SB readers? What do you think is the reason why covers remain so popular in pop music?