Ji Hyun-woo Released From the Military 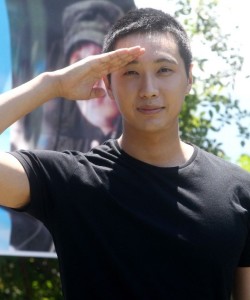 It seems like just yesterday that Ji Hyun-woo made his love confession to Yoo In-na, before whisking off for his mandatory military service in August 2012. On May 6 2014, Ji greeted 100 of his fans as he was released from the military, returning back to civilian life.

A week before his discharge, Ji was already courted for his post-army comeback project – upcoming KBS drama Trot Lovers. Trot Lovers is a romantic comedy about a genius musician who hates the trot genre and, of course, falls in love with a female lead who aspires to be a trot singer. Ji is confirmed to play the top star musician who grooms the female lead to fame. Taking into consideration his extensive musical background, especially as the lead guitarist of The Nuts, it seems a fitting choice to cast Ji in such a role. After his last hit drama Queen In-hyun’s Man, fans are already clamouring for his return to television. With the broadcast date set in June, Ji will have to get started on filming immediately after his discharge.

The name floating around right now for the female lead is IU, although she has yet to confirm her participation. If they do both sign on, their individual experience in both the musical and acting field will be a huge plus to this production. As of now, the media is clamouring all over this potential casting since IU is known to be best friends with Ji’s girlfriend, Yoo In-na. Well, I’m sure IU would have already consulted her unni about this. 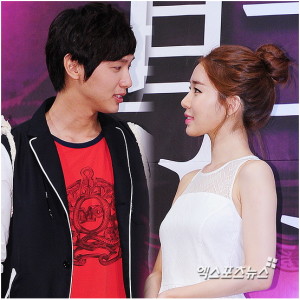 Speaking about Yoo, fans were up in a tizzy when she didn’t show up for Ji’s discharge ceremony. Ji was also incredibly ambiguous when the media questioned him about Yoo, responding, “That question is a bit… it is a difficult question to answer”, which sparked further concern about their relationship. Eventually, YG had to step in to comment that Yoo’s no-show was because of her overseas schedule, and that the two of them were still seeing each other. Only time will tell the truth —  if Ji is indeed in the small minority that actually doesn’t lose his girlfriend during his 21 months away.

In any case, it’s always great to see celebrities stay in demand after two years out of the spotlight. Other celebrities to be released from the military this year — Lee Hyun, Lee Je-hoon, Leeteuk, Yoo Seung-ho.