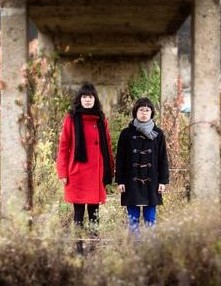 Lucite Tokki (aka Lucite Rabbit) is the indie band that we have our eyes on for this week’s K-pop Indie Gem. The musical team consists of Cho Ye-jin, in charge of vocals and keyboard, and Kim Sun-young, a gifted guitar-player. The girls did various projects together before finally settling for a duo and sending a demo to one of Korea’s top indie labels, Pastel Music. Both write the lyrics, although separately; Sun-young cites Ye-jin as her inspiration and Ye-jin–people in general. Since their departure from the aforementioned company, they became even more involved with the composition and production.

Initially, the two young women called themselves ‘Tokki,’ since Ye-jin likes rabbits and thought Sun-young looks like one. But because a friend told them it’s kitschy and many other indie bands out there fancy the same cute animal, they put ‘Lucite’ there too — for a lucite necklace that Ye-jin once wanted.

Twinkle Twinkle, their first album, saw the light of the day in 2007 and introduced the public to the duo’s whimsical sound and simple, but soulful lyrics. The languor of a summer day, laziness, happy little things like rain or a kiss make the album a joyful and enchanting artwork. Heartwarming, airy, happy-go-lucky tracks go hand-in-hand with ardent, but peaceful break-ups.

The tracks are sweet and sour, but always lighthearted. Surprisingly, most songs have a subtle sadness hidden under the layers of a cheerful tone and calm voice. The two of them are sentimental and the short lyrics compressed within their smooth, untangled words, the emotions of the day, sometimes with autobiographical references. “Piano Lesson” talks about an older crash of Sun-young, who learned that she is talented after asking the boy to teach her how to play guitar. But the one song filled with nostalgia has to be “December:”

And if there’s twinkle, then there’s sparkle. A Little Sparkle, their second album, carries the listener into catchier melodies and beautifully rounded tracks. With their smile on and a jam-packed emotional luggage to reveal, the songs go from urban fairytale to Christmas carols. Ye-jin’s keyboard ads to the playful quality of the songs. Funkier and more experimental, the works are a full treat: poppy, multi-flavored and addictive:

They also participated in the soundtrack for the 2011 K-drama My Princess with “The Last Song.” And if love confessions, foolish dreams, or what these girls let out of their closet didn’t convince you, their last two singles are even more friendly and bubbly. “Go” is motivational and upbeat, with a “Move your bottom out of chair!” blatant message, not to mention that it is fully in English.

Noisier and peppy, the band started a new project in 2011, Lucite Tokki’s Suitcase Theater, where the girls do acoustic versions of different songs, and so far have done three episodes: “Go,” “The Sweetest Loser” and “Have Yourself a Merry Little Christmas.”

The members of Lucite Tokki are charismatic, skilled and full of life. They usually attend small venues: cafés, bars, little public places where anyone can chill and listen to some good music. They confessed before the hardest part was to promote and get their work out there, but it got easier with time, since their audience kept growing. So tune in if you like their music and feel like supporting them!