How I saw SJ-M's Henry in Taipei in person... 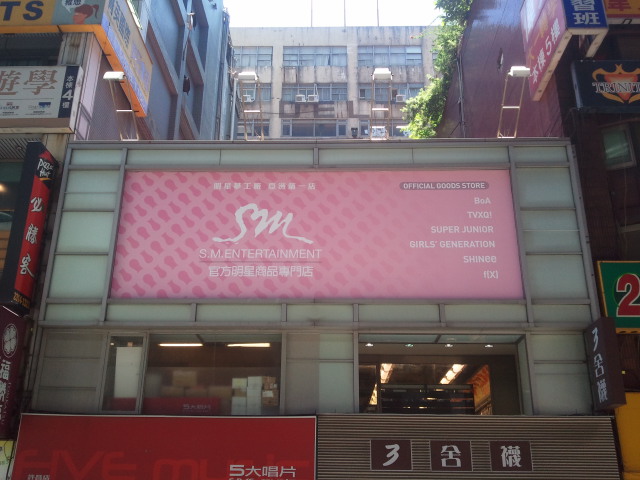 …and lived to tell about it.

I’m currently studying abroad in Taiwan for the summer. Unfortunately, much of my time has been consumed with schoolwork, but as per the age-old proverb, “All Work and No Play Makes Jack a Dull Boy.” Which, to me, translated into, “Take Advantage of Any and All K-pop Stalkage Opportunities While In Taiwan, Because You’re Gonna Miss It Once You’re Back Home In The Comparatively K-pop Deprived American Northeast.”

So when news came about that Super Junior-M‘s Henry would be cutting the ribbon for the grand opening of SM’s flagship store in Taipei – the first of its kind outside of Korea – you can bet that I jumped on the MRT right after class to go catch this event of potentially epic proportions. This event was also Henry’s first solo event apart from Super Junior-M.

SM has declared their plans to ‘conquer’ the Chinese market on multiple occasions, but it looks like they’re finally putting their money where their mouth is with the opening of their first exclusive shop outside of Korea. The store exclusively stocks SM Entertainment merch, as well as some special goodies available only to Taiwanese SM fans. It’s located right behind Taipei Main Station, the busiest commuter hotspot in the city. In addition, the area is populated with numerous English-language schools and hagwons, or “bu-xi-ban.” SM artists are immensely popular with Taiwanese grade school students, so it looks as if SM’s hit the jackpot with both the mission and location of this new store. Snaps for SM, everyone. 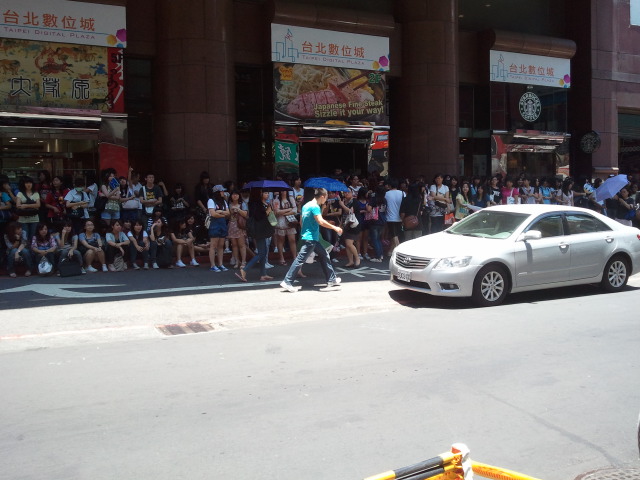 This was the crowd on the opposite side of the street at around 11:30, two and a half hours before the actual event.

News of Henry’s appearance at the ribbon-cutting ceremony didn’t reach fans until Wednesday evening, but the event nonetheless drew hundreds of fans to crowd in front of the building before noon. The event wouldn’t begin until 2pm, but despite the July heat, the crowding of fans slowed down area traffic for nearly four hours. Most of the fans congregated on the opposite side of the street across from the building itself. Others waited on the sidewalks on both sides of the building and effectively obstructed the storefronts of neighboring shops. These fans were shooed away to the already overflowing crowd across the street once the event began. Ultimately, the sidewalks were blocked off with yellow tape in order to keep the ever-growing crowd of fans from spilling into incoming traffic. Police officers were also on the scene to assist the store’s staff with crowd control. 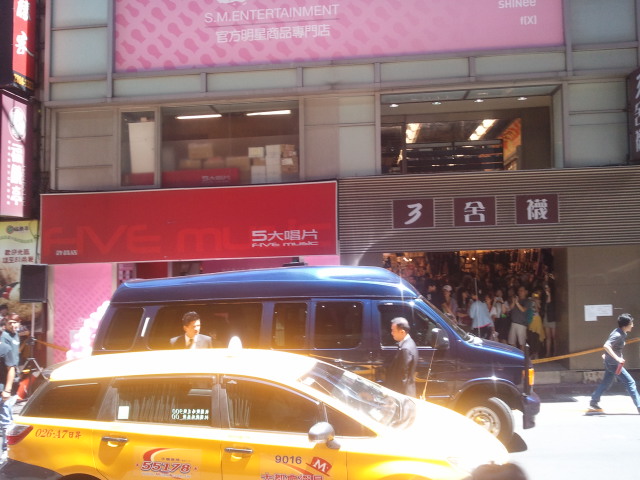 Henry arrived at around 1:30 pm in a blue van, accompanied by several staff members and stylists. And I’m not being superfluous when I’m saying the boy was glowing…could’ve been his smile, could’ve been his bright orange hair, could’ve been the fact that he was wearing a blazer jacket in 85 degree weather…but he looked good. As expected, his arrival was met with bloodcurdling fangirl screams that began as soon as the van pulled into the street and didn’t end until Henry had ducked into the building to rest up a bit before the event started. In the interim, Henry was spotted at the building’s second floor window, jumping up and down to peer over a bunch of cardboard boxes that were stacked in front of the window. Yes, it was as adorable as it sounds.

Around twenty minutes later, Henry re-appeared at the store front for press photos and an interview. For most fans, the view was obstructed by press cameras, and he could only be seen from the shoulders-up from most areas. In addition, street traffic had not been blocked off for the event, and large trucks were constantly passing by the building and obstructing the view, much to the fans’ chagrin.

The interview began with gratuitous amounts of pimpage on behalf of the store, including the promotion of a special type of fan (similar to a Japanese uchiwa), only available at the Taipei shop. The fans bear the faces of various SM artists, and during the interview, Henry was wielding an uchiwa with his face on it and making lame jokes about how the fans should buy the uchiwa and look at his face whenever they miss him. Seriously, Henry? Seriously? (If you really want to cringe, here’s a fancam of him being all cheesy and making kissy face at…his own face. Um.) 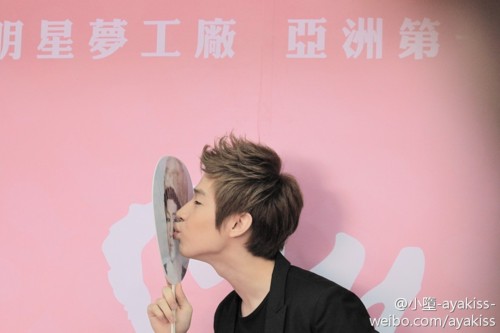 (In addition, Henry also forgot how to say ‘fan’ in Chinese. S’okay, Henry, I was shouting translations from across the street. I got your back.)

During the interview, Henry mentioned that he was in fact on vacation in Taiwan (after a two-month promotional stint with Super Junior-M this past spring) and was leaving tomorrow, and swung by for the ribbon-cutting ceremony because he had the time and opportunity to do so. Like any thoughtful K-pop idol, Henry expressed his love for Taiwan, calling it his ‘second home,’ and sent a message out to directors and producers in Taiwan, requesting them to consider him for any musical activities, product endorsements, or drama roles. He then cheekily admitted his relatively sucky acting skill, in regards to the last point. Good to see someone’s being honest with themselves. 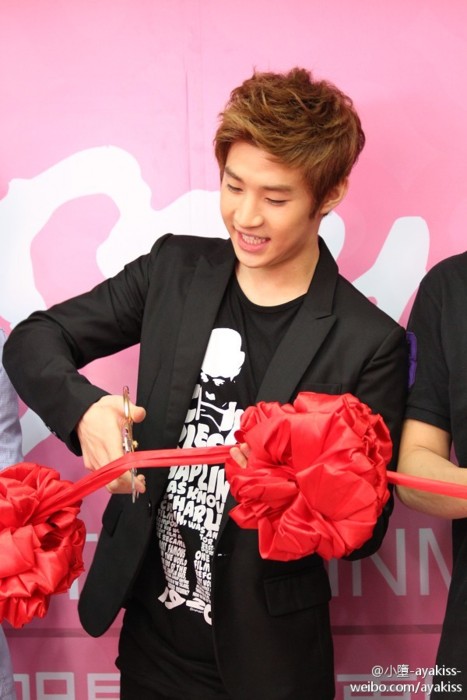 The event ended with the ribbon-cutting ceremony (Henry: “Wow, didn’t think these scissors would be so big!”) and accompanying press photo session. Soon after, Henry was whisked back into the building – but not before singing a few bars of his solo song, “Off My Mind” a cappella to the crowd, switching up some of the words to make the fans squeal louder than they already were. Hate to say it, Henry, but “get you off my mind” and “get my mind off Taiwan” don’t really rhyme and flow all that well…but since you’re so cute, I’ll just let it go.

A few minutes later, Henry re-emerged from the building and made his way to the van, but not without being hoarded by hundreds of fans who had finally spilled off the sidewalks and surrounded him as he crossed the street to get to the van’s doors, constantly waving and smiling even as he was effectively engulfed in a sea of people. And then he left.

The store doesn’t formally open to the public until July 10th, but a limited number of people were able to enter the store today via a drawing that took place prior to the event. I myself haven’t had the chance to take a look inside the store yet, but from what I saw through the windows, everything looks very pink and very SM-y, for lack of a better term. There are, reportedly, life-size cardboard cutouts of the Super Junior members hanging from the ceiling. It’s a shrine to all things SM. Need I say more? 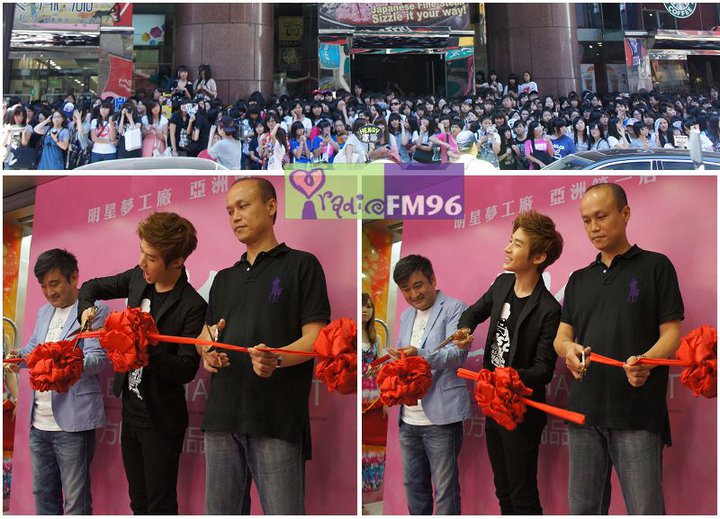 So that’s my story of how I finally saw a K-pop star in the flesh outside of a concert, but it’s also my story of how I survived my first experience as a K-pop “fan” outside of the States. It goes without saying that K-pop fandom functions very differently in Taiwan than it does in the States – the fans are, for the most part, a lot younger; most seemed to be no older than 15 years old. Additionally, Taiwan is no stranger to idol hysteria; a number of passerbys weaved through the crowds without giving much thought as to what was going on – the pink balloon arch and the giant SM billboard mounted on the storefront seemed to be indication enough. The density of Taiwan as an island country and Taipei as a city also helps to foster the ‘group-think’ phenomenon that often characterizes in K-pop fandom. I often speak ill of K-pop expanding its borders past that of the Korean peninsula, but after what I saw today, I’m starting to believe that SM’s investment in Taiwan was a very smart choice.

That aside…Henry, if you’re reading this, I was the one in the crowd with the “EH?!” sign, written on the back of one of my old Chinese essays in pink highlighter. You probably didn’t see it, but I had to make do with what I had with me, y’see. And I know I’m not Canadian, but I sure do love my poutine and maple syrup. Hope you appreciated it.