The Teaser That Will Destroy the World: Part Deux 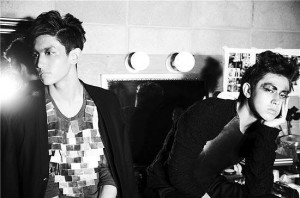 Please ensure that an oxygen tank is immediately available after viewing the following sixteen seconds of condensed sexiness.

Having released the second of three teasers for their upcoming album, the Gods of DBSK/TVXQ/THSK are back! This new teaser provides more insight into a song, an album, and a comeback that is built on a foundation of powerfully kinetic bodies, amazingly acrobatic vocals, and a dangerously seductive charisma that’ll have you trading in your Christmas presents for a slice of this DIVINITY.

Anyone catch my bias yet?

Things I didn’t like (Shocking? Yes. But hey, it happens):

What do YOU guys think? Excited to see HoMin in action? Scared?