Large parts of the world remained in quarantine/lock-down this May, and staying home provided the perfect excuse to tune into all the music being released by the K-pop industry — and there was a lot of it! Some releases, such as BTS‘s Suga‘s D-2, were intended to provide respite from the pandemic, while others, such as Day 6‘s “Zombie“, perfectly captured the mood of many confined to their homes, and yet others were just merry old K-pop, such as Baekhyun‘s “Candy“.

In this month’s edition of Unsung Artists, we take the chance to highlight a few collaborations and side projects that caught our eyes (and ears). Whether because of the names involved, the concept or simply the music, these releases deserve a closer look.

In the lead up to her comeback with “Hug“, one-(wo)man band Bol4 released “Leo” featuring Exo‘s Baekhyun. The release came just a day after another power collab hit the scene, IU‘s “Eight” featuring Suga. Unfortunately what should have been a fun competition between the two, never materialized for “Leo” leaves almost no impression. The music and vocal delivery is airy and light, barely touching on anything substantial and memorable; and Baekhyun fails to add any energy to the song.

The song’s concept is the most enjoyable aspect of the release. The song’s Korean title, 나비와 고양이, translates to “Butterfly and Cat”. The lyrics speak of someone looking for a butterfly. But it flies away every time it sees the cat. This is not a child-like story, the “butterfly” in the lyrics is a feeling of having butterflies in your stomach — the excitement felt when starting something new, whether it is a new love or a new job or a new adventure.

I’m filled with butterflies
This weather, this feeling I
look for you and then I find you somewhere
Land on my hand and stay for a while

In the MV, Ahn Jiyoung takes on the role of the metaphorical cat. She plays by herself in a room. Her toys include balls of yarn (a typical “cat” toy) and her hair clip has a big bow (giving the appearance of “cat” ears). Eventually, Jiyoung spots a butterfly and follows it out of the house, where she finds a new world of wonders to enjoy. Soft lighting and a blurry background give the impression of a dream — a simple one in which butterflies bring us joy amidst our routine, daily lives; and fittingly during this era of stay at home precautions, serve as a playful reminder that the day when we are able to step out without worry, will indeed come again.

Skz-Player, which servers as a platform (among many others) for the Stray Kids‘ members’ to display their talents and solo endeavors was particularly active this May. Of the three releases, Changbin’s “Streetlight” featuring leader Bang Chan is particularly noteworthy. A piano-rap, “Streetlight” is both melodic and emotional, characterized by a clear, repetitive and uncrowded sound — but this time, the simplicity is far from being boring. On the contrary, it haunts your ears long after you have stopped listening to it. The emptiness within the song reflects the emptiness felt by the song’s persona.

The MV is equally devoid of action and color. Almost entirely in grey for its first half as Changbin sits in front of an empty stage, the MV takes on some color only when he gets up and takes his place under the spotlight. Even so, the addition of color is minimal, and it is clear that Changbin has not moved out of the night in his head. Bang Chan does not appear in the MV, and the focus is solely on Changbin. Indeed, Bang Chan’s feature provides support without taking away the spotlight from Changbin.

Changbin’s sing-song rap for this song conveys a strained and pained emotion. Auto-tune is used just right — enough to add melody but not enough to interfere with Changbin’s voice, where the emotion lies. Stray Kids’ young rapper Changbin is one of the better idol-rappers in the industry today, and this self-composed, uncomplicated song focused on his rap, is a good example of why.

In their latest comeback, single album Produced by [ ], OnlyOneOf release three songs produced by respected producers who, it is hoped, will expand OnlyOneOf’s musical spectrum. In keeping with the theme, the title track “Angel” has been produced by AOMG‘s star producer Gray. Cha Cha Malone and Boycold are the other producers on the project. Gray’s touch is prominent throughout the song, perhaps too much so — “Angel” relies heavily on production, and little on OnlyOneOf’s members to make itself memorable. The result is a song that could have been performed by any young boy group, but produced only by Gray.

Despite this criticism, “Angel” is good comeback. It continues the theme of good and evil from “Savannah” and “Sage“, but in contrast to their earlier, dark concepts, OnlyOneOf take on a laid back, groovy and refreshing vibe. The electric guitar opening the track sets the expectations clearly: You’re in a fun ride with OnlyOneOf as their angel. Indeed everything about this release is fun. To begin with, although angels are normally associated with white, the dominant colors of the MV are green and black, for no good reason. Junji sports a ridiculous hairstyle that hides his good looks, and the back up dancers wear silly rib-knit three-hole balaclavas that make them look like robbers.

All things considered, this is a different side to the group, and one that suits the rookies better than the dark, moody concepts permeating K-pop of late. Of their singles, “Angel” is the one I’d recommend to anyone who wants to check them out.

Former 2NE1 member Minzy returned as an independent artist following a hiatus post her solo debut EP, Minzy Work 01: Uno under Music Works in 2017. It’s been a long break, and Minzy is reported to have written the lyrics to “Lovely” herself — both seeking reassurance that she is lovely, and reassuring listeners that they are lovely. Reading the lyrics, it’s clear there’s personal feeling involved.

From this dark place like an endless tunnel that I got sick of
Would I be able to go back?

This release too comes with an MV where nothing much happens. The MV has a distinctly delicate, feminine aesthetic. Minzy looks beautiful, and her dresses compliment her surroundings. Flowers, curtains, a sofa, wide windows are all props used to accentuate her charm.

The song is melodic, and relies heavily on Minzy’s vocal abilities, allowing her strengths to shine. Despite her strong vocals, there’s something gentle and soft about “Lovely”, mostly because of the acoustic guitar that underlies the song. There’s a sense of lift and of flight — this is a song to listen to on a long drive, or on a plane. Airy backing vocals and endless harmonies amplify the experience. Minzy’s done a great job as her first independent effort, and I look forward to seeing what she will be showing us next in the future.

Chungha’s latest release features rapper pH-1 and comes from Mnet‘s Song Farm, and has been produced by Zion.T. The song itself is fairly repetitive mid-tempo trap, with little variation to keep things interesting. Chungha’s vocals are airy and pH-1’s rap is relaxed — it’s a pleasant and soothing listen, but entirely forgettable. The song’s true charm lies in its lyrics. “My Friend” is a conversation between Chungha and pH-1, in which she notices something is wrong, and asks him to talk to her about it.

Here’s a paper and a pen
Will you write down things you want to say?
Let it be a name or a very bad word
Everything that hurt you

In return, pH-1 responds by revealing his thoughts, and notes that he’s grateful for the friend who is always by his side. In the MV, Chungha takes her responsibilities as a friend very seriously. Indeed, being there for pH-1 is her day job. She wakes up and goes to work, where she calls him over for a consultation. Later they wind up at her house, talking through his troubles. It’s a nice reminder to always cherish our friends, reach out to them for help when we need, and be there to provide counsel should they need us. 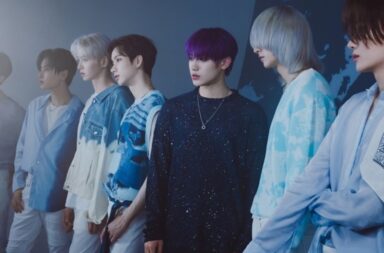