Eric Nam Dances into Hearts with "Can't Help Myself" 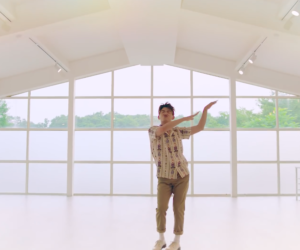 If Eric Nam‘s recent release of the single “Can’t Help Myself” has confirmed anything for me, it’s that Eric Nam is simply delightful. He has that slow-burn kind of charisma that may take a few musical encounters to sink its claws in, but once it does, you’re hooked.

Whether it was his feels-inducing release of “Good For You,” his appearance at KCON, his duet with Red Velvet‘s Wendy, or his adorable fake-marriage to Mamamoo‘s Solar on We Got Married, 2016 has truly been the year for Eric Nam to shine. It’s no surprise that over the past few months he’s recruited quite a few of our Seoulbeats writers into his fan club, and it appears that with “Can’t Help Myself” I have become the newest member.

“Can’t Help Myself” is a summer groove track in the same vein as Justin Timberlake‘s recent “Can’t Stop the Feeling.” Instead of the funky backing beat of the latter, Eric takes to his signature guitar and infuses the upbeat track with pop elements that make it a catchy, exciting new sound to hear from the artist. We all know that underneath his recent string of emotional ballads, there’s been a dork waiting to break free, and “Can’t Help Myself” is exactly that opportunity for the singer.

In “Can’t Help Myself” we’re introduced to Eric Nam as the dork smitten with a beautiful girl he encounters daily at the bus stop. In an attempt to woo her, he tries on a variety of personas while also attempting to show off some impressive skills like magic tricks and dip recipes. Never being discouraged, he endures failure after failure, coming back with more vibrato each day. Much like figuring out how to beat AlphaGo, Eric Nam tries to deduce a strategy to win her heart. When he can no longer take it, he drops all pretenses and serenades her on the bus before pulling her away to a romantic dinner and (hopefully) winning her heart. 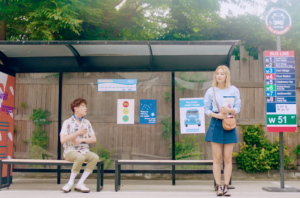 Not only is his dedication completely endearing, but each Eric Nam incarnation in the MV is more charming than the last. It’s hard not to swoon a little for the artist as you watch him as a serious newscaster, aggressive pineapple dip pusher, busker or geography nerd. Not taking himself too seriously, Eric Nam doesn’t hesitate to poke fun at himself (and recent news stories) in each of these incarnations, either. The MV features WGM-style interview segments, Eric getting hit in the face with flurries of fake snow, the dorkiest smiles you have ever seen, and dancing.

The final nail in my Eric Nam-loving coffin came when that man started to groove with reckless abandon. There’s arguably little skill to his moves, yet there’s a jovial finesse to them that can only come from the genuine enjoyment he feels performing the song — or perhaps from the feeling of being so enamored with someone. Still not sure why he decided to dress up as Michael Jackson and pelvic thrust, but I appreciate it all the same.

Aside from the quirky cuteness of the MV’s plot, I have a few equally important observations to get off my chest. First, Eric Nam is just a pair of aviators short of being a baby version of “Who’s Your Mama” era JYP. If he doesn’t make the most of that on an episode of SNL Korea soon, it’ll be such a waste. Second, the female lead of the MV is a dead-ringer for Exo‘s Xiumin. Third — and most importantly — I am hopelessly now an Eric Nam stan.

Everything about “Can’t Help Myself,” is sticky, much like Eric Nam himself. While I enjoyed the track instantly, it took a few listens before I was completely hooked. The song starts off hesitant, just like Eric’s efforts to woo the girl. Through the first chorus, he gains confidence, proudly belting that he doesn’t want anyone else in his life. The bridge featuring Loco doesn’t add much, but it does provide a nice change of vocal dynamics before Eric Nam swoops in for the final chorus. His sweet voice is the kind that encourages you to feel the happiness of the song, and it’s easy to keep singing along even after the track is finished.

Unfortunately, Eric’s silly dance moves in the MV are equally sticky and I can’t not bop my head along, fighting the urge to moonwalk and do celebratory fist pumps when I’m listening to the song in public.

With so much personality packed into a single song and MV, “Can’t Help Myself” marks another success for Eric Nam. As he continues to gain media exposure in South Korea, I can only hope we see more equally enjoyable releases from him in the future.

Readers, have you hopped on the Eric Nam stan train yet?