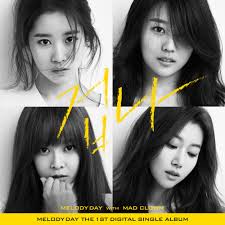 Melody Day is slowly but surely moving up the ranks of rookie girl groups. Their latest release, “Anxious” features rapper Mad Clown, well known for his excellent duets. Their vocal skills are no joke, and they just keep proving it.

They harmonize, allowing their voices to meld into more than each voice on its own can do. They use counterpoints instead of always singing one at a time. This gives their songs more dimension than a typical ballad — more punch.

Sadly, that punch is lessened by Mad Clown’s appearance. I have nothing against him; honestly, Mad Clown is an excellent duet partner. But “Anxious” is so melancholic and delicate that there’s no way for his part to mesh with the rest of the song. Not helping matters is that “Anxious” falls into the old duet trap of the two parties speaking at each other, not to each other.

Of course, one could argue that that’s the whole point of the song. “Anxious” is a tearjerking song about letting go of a relationship and moving on. However, it’s not set post-breakup. These ladies haven’t been dumped, they’re steeling themselves to dump their boyfriends. Sometimes, relationships fade, and you need to be able to end them. Too often, people think any relationship is better than no relationship. Melody Day strike back against that idea by pointing out that a relationship where you’re just waiting for the end is already over. You just haven’t said the words.

The MV is loaded with great visual metaphors. The members of Melody Day are stuck in patterns, unable to move forwards until they acknowledge that they need to do so. They paint over the faded reminders of photographs, letting the past truly sink into the past. They replace their old, dead plant with a new, bright one, as they’re doing with their lives. 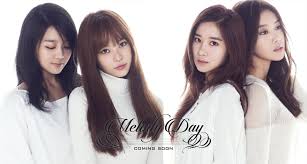 Two bits of symbolism really stand out, not only for how imaginative they are, but of the deeper aesops implied. The first is the fridge full of milk. Without realizing it, she let it expire, just like how her relationship went stale when she wasn’t paying attention. But you can’t just ignore when things go bad, even if it feels easier. You can’t stick old milk back into the fridge, and you can’t stick a stale romance back into your life. It will bring nothing but problems if you do, so get rid of it now.

The other is the crosswalk. One member is literally stuck at a crosswalk, unable to go forward, but unwilling to back. She eventually does take those steps, nervous and unsure. The thing is that she doesn’t start going when she’s supposed to — the first green light she gets. Instead, she waits, making sure she’s ready to go; moving on her schedule. There is no right length of time to grieve over a relationship. The right time to move forward is when it feels right to an individual person.

The whole MV balances wonderfully on the line of artistic and comprehensible. The cinematography is very graceful, very sweeping, with subtle tints to indicate where in each relationship timeline a scene falls. It has a timeless aura that almost feels like a painting with its poignancy. I can’t wait to hear more from this quartet.