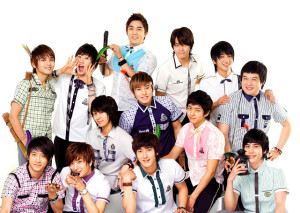 On the back of Super Junior’s recent comeback, we’ve decided to do a special K-pop throwback segment, to check out some of the older, yet legendary, K-pop material that we didn’t get to feature in the past. For this installment, we have Super Junior’s all-famous “Sorry, Sorry.” Released slightly more than five years ago, it’s old in terms of K-pop time cogs, considering that half of us probably weren’t even aware of K-pop yet. Heck, it was during the time where Super Junior was still 13, with Hangeng and Kibum still in the group lineup.

No matter when you became inducted into the K-pop fandom, “Sorry Sorry” is pretty much a K-pop staple, the basic anthem that every K-pop fan has to know. Possibly, most of you guys might have been introduced to K-pop by a random friend forcing you to watch this strange video of thirteen guys singing and dancing together. And before you knew it, you have joined many others in this sinkhole called fandom. 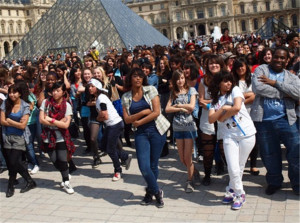 “Sorry Sorry” is a K-pop legend in all the best ways, with the catchy English hook and easy-to-replicate-in-huge-masses dance moves. It has joined the ranks of hits such as Girls Generation’s “Gee” and Wonder Girls’ “Nobody” as K-pop songs that even non-K-poppers know. Internationally, especially in Asia, the “Sorry Sorry” effect was phenomenal. It spawned countless flash mobs of massive groups of people dancing along to the song, is a karaoke-essential, and was literally playing for months in every single mall.

What really makes this song work is everything was done in the name of fun. It has a monotonous and vocally unimpressive auto-tuned verse and chorus, with a bridge that features slightly more range and ad-libs, pulled off flawlessly by Ryeowook and Sungmin as usual. Perhaps in the current day and age, it would have been a pretty tired and predictable arrangement. But back then, the heavy electronic beat, and the minor influences of funk somehow clicked extremely well with the audience.

The MV too is actually quite modest and features nothing flashy or ridiculous. It epitomizes the SM box video to the tee, featuring just the 13 boys in their group dance shots, as well as the necessary up-close solo shots. The black-and-white monotone actually injects a more elegant and sophisticated texture to the overall feel of the song, and it also aids in the illusion of the on-the-point synchronisation amongst the members. 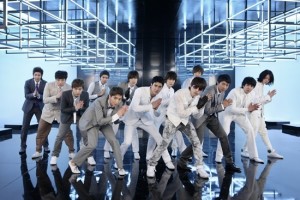 If you realize you don’t know any lyrics from this song other than ‘sorry sorry’, ‘shawty shawty’, and ‘dan dan dan’, feel free to join the club. For the first time in forever, I took a look at the English translation of “Sorry Sorry”, and frankly speaking, all the stammering words made my head hurt. It’s the epitome of an earworm – annoying as hell, but good luck for getting it out of your head. Anyway, the lyrics revolve around a guy apologizing for his undying love for the girl, who is represented by the opening scene with the lady looking through the keyhole and teasing the guy. Nothing exactly deep there. Again, “Sorry Sorry” is really the personification of simplicity and fun, and perhaps no other group other than our Super Junior boys can embrace that concept as seamlessly. While such concepts might not be as unique and refreshing now, Crayon Pop’s “Bar Bar Bar” still proves the viral reaction that a ridiculously fun dance move and song hook can bring about.

While Super Junior wasn’t exactly doing badly prior to “Sorry Sorry”, this release is still evidently the inflexion point, the defining moment, the breakthrough of their career. “Sorry Sorry” was an instant hit, catapulted the group to fame, winning a total of ten number-one awards for ten consecutive weeks in Korea. Till this day, “Sorry, Sorry” is still Super Junior’s best-selling single in Korea. Within the album’s first month of release, it became Korea’s best-selling album of 2009. It was also the best-selling K-pop album in many Asian countries such as Taiwan, Thailand, China, and the Philippines.This specific comeback enabled Super Junior to become a household name and won over a whole following of ELFs, allowing them to win several accolades at the 24th Golden Disk Awards, including the Disk Daesang (Record of the Year).

To commemorate the success of “Sorry Sorry”, a R&B remixed version called “Sorry Sorry – Answer” was also released, showing off a acoustic and toned-down arrangement, and presenting a raw side of the boys.

And seriously, it doesn’t matter how I even rate this MV. I’m going to just let the number of YouTube views speak for itself: 51 million views for the official version, and countless other uploads, covers, and flash mobs. It’s a timeless classic of K-pop, one of the best examples of the characteristic K-pop hook and choreography, and perhaps the one song that is partly responsible for Super Junior’s ability to hold their 100th Super Show. Perhaps one of Yoo Young-jin‘s genius works, “Sorry Sorry” will forever go down in history as a lasting icon of K-pop’s best.

So, how many are you were inducted into K-pop with “Sorry Sorry”? And how much do you like this song now?