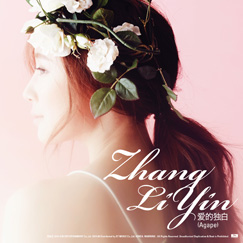 Coming out of the dungeon after five years without a single, Zhang Li Yin made her comeback with the gorgeous song, “Agape.” Backed by piano, strings, and drums, Zhang Li Yin delivers a vocally flawless and emotional song.

The track is aptly named, as “agape” is translated from Greek to mean “unconditional love.” The song is a song of hope for those going through a tough time.

I never left, Oh love
No matter how many obstacles that are experienced
Do not be afraid of the wait that was lost
Kissing my love
Remember love’s soliloquy
Once you cross the distance you will see real love

Despite it seeming that love and hope are gone, love is still there in spirit. Even pain can’t wash away love. This is such a strong and powerful sentiment, especially given tragedy. It has been said that song was sung in remembrance of the 2008 Sichuan earthquake – Zhang Li Yin is from that particular province in China, and with this song means to always be there to offer love and comfort to those who are in need.

The MV for “Agape” really does exemplify what the lyrics try to convey.

The plot is pretty self-explanatory. In the beginning, we see a baby being rescued from a building collapse, but the mother dies. Years later, the baby, now played by Tao, saves a young woman, played by Victoria, from being hit by a car. A young woman who looks remarkably like his mother. 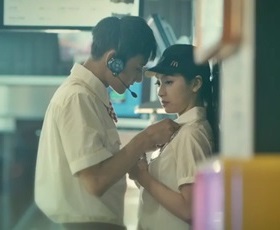 Cue the obsessive compulsion for Tao to be around and protect Victoria, including kicking butt and taking names. Tao even goes as far as to acquire a job at McDonald’s to be nearby. Don’t get your hopes up though; we probably won’t ever see someone as beautiful as Victoria working in our local McDonald’s. Victoria naturally finds out the reason behind his affections after seeing a photo of his family.

Finally, we get the complete explanation of what happened to Tao’s mother: she died protecting him during an earthquake – particularly the Sichuan earthquake. This occurred while his father (Song Jae-rim)was away and watching the traumatic events on television. During most of his childhood, Tao was without the affections of a mother.

On the surface, the story line seems rather innocent. Tao simply seeks out some motherly affection. From the story, we can see that the mother took good care of the baby, even sacrificing her life.

However, underlying that is the suggestion of an Oedipal complex. While I’m not a psychologist, the concept of the Oedipus complex is pretty commonly known. In a tragic Greek myth, Oedipus fulfilled the prophecy that he would kill his father and marry his mother. This is the basis for Sigmund Freud’s idea of the Oedipal complex.

There are a lot of stages and psychoanalytic theory to go along with the complex, so I’ll put it simply. It is commonly used to describe an abnormal attachment of a male to his mother. This goes beyond just simply being a mama’s boy. It can manifest in many ways, but in the case of the MV, Tao becomes attached to someone who looks like his mother. She even does things that are reminiscent of his mother.

Whether the attachment is romantic or just the desire to be nurtured isn’t made known in the MV. From the majority of the scenes, perhaps it can be theorized that Tao wants to nurture and be nurtured. He looks after Victoria like he would his mother, and enjoys being looked after by someone who is like his mother. 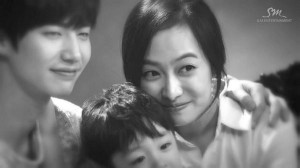 SM Entertainment tends to lean toward the innocent fluffy side of things, but it has always upped the ante on dramatics for Zhang Li Yin MVs — whether the Oedipal complex was intended, though, is another question. It would be a decent theory that Victoria represents the love the Zhang Li Yin is singing about: seemingly gone, but still out there.

In general, the MV is an indicator of one of the biases of SM Entertainment – one of the ones I’m not too terribly upset about. While they rarely trot out artists like Zhang Li Yin, when they do, they make it count. No boxes, no bright CGI effects, no crazy hair colors and outfits.

MVs for artists like Zhang Li Yin and Boa are typically better done. “Agape” is no exception. There’s a coherent story line and everyone looks like normal people. Albeit, incredibly good-looking, normal people. “Agape” is an emotional tale of love, sacrifice, and finding that nurturing human connection.

“Agape” is a beautiful song, beautifully sung, and well portrayed.