All About My Wife took the box office by storm this year, being one of the most viewed romantic comedies in 2012. A remake after Un Novio Para Mi Mujer (A Boyfriend for My Wife), the film starred Lee Seon-gyun in the role of a husband who can’t get any rest. Doo-hyun is a man tired of the life he’s leading with his wife. He constantly feels like she’s embarrassing him with her nitpicking and doesn’t understand why she can’t just pass an opportunity to raise her voice. He tries moving town, but she follows him. The man finds out one of his neighbors is a Casanova, one that women can’t resist. So he has a bright idea: how about paying his infallible neighbor to seduce his wife so that he can get a divorce?

Let’s see how the Korean version deals with this plot.

The beginning is quite endearing. Alone in Japan and scared of an earthquake, Jung-in (Lim Soo-jung) is looking for a shelter that might protect her from the calamity. Nobody around her seems scared and she’s the only one panicking in the street. A stranger promises to take her to a safe place. She accepts and he takes her home, informing Jung-in that his job includes securing buildings in case of earthquakes. The two, Doo-hyun and Jung-in, soon start going out and the first minutes of the movie are a lovely chronology of their moments spent together. The watcher sees a happy couple, about to get married, and root for them to do well in life.

But fate’s not easily thrilled.

A fast forward over the next seven years and a bitter woman is shown getting out of her house and starting a fight with the newspaper delivery guy. Her husband gets out soon after to settle the argument and tells Jung-in to stop and get back inside. Pissed off by Doo-hyun humiliating her, she starts yelling and kicking things until the man finally whispers they should break up. She gets even angrier and he attempts to excuse himself by saying it was a joke.

This is just the tip of the iceberg and how we get familiar with the couple’s problems. The two don’t hate each other, but they have forgotten how to communicate. The main culprit appears to be Jung-in, with her relentless whining about… anything. She doesn’t have an off button and keeps complaining about his habits, the vicious world and social injustice. Doo-hyun wants a moment of silence, tranquility. Because Jung-in was learning Japanese back in their happy days, and promised herself to speak only Japanese in Japan, he mistook her for somebody quiet or shy and he says he was surprised when, quite the contrary, the girl he chose was a hot ball of nerves and fury. He’s horrified of the fights that might ensue by bringing up divorce, so he resorts to a less conventional solution: a playboy to sweep Jung-in off her feet. 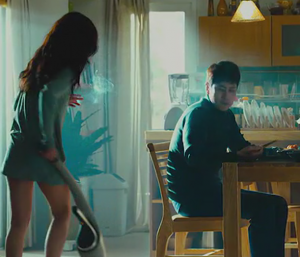 But as I said, the problems the couple face go way deeper than the shallow surface they believe they’re skating on. While Jung-in seems to rage out of nowhere, we gradually find out the reason for her constant anger. Before marrying Doo-hyun, she was an aspiring writer and managed to grab a literary prize with one of her first novels. Her father thought writing would hardly bring her any money and threw her work away. Jung-in felt frustrated and thought of trying something different. She got married, but after countless efforts to have a baby, they were unable to conceive one. To top it off, she is often judged by others of being a housewife, reminded by her husband she’s not a breadwinner and permanently questioned as to why she doesn’t have any kids. Among the venom she spits, Jung-in is trying to make her husband sensitive to her problems, but he has grown immune to anything she says. She’s trying to fill the void in their lives with her wording and break through to Doo-hyun, but they don’t have a common language to speak in, so her efforts never reach the results she expects. His silence and displeasure confirm her bottled-up feelings of guilt and she remains the victim of a vicious circle. She finds herself bitter and concludes that people feel intimidated when a woman is assertive.

On the other hand, Doo-hyun loves Jung-in but fails to acknowledge her true feelings. He believes Jung-in had burned down her parents’ house for him (she accidentally set fire when she burnt her manuscript); he never questions whether she’s happy or not at home or if she wishes to do something else. Mainly, he loves Jung-in and believes she loves him too, but it’s impossible for him to understand why this is not enough for their marriage to work. He doesn’t appear as bothered with them not having children, nor is he laying this burden on her shoulders. Doo-hyun genuinely thinks a happy home needs only the two of them. Appreciated at work, content with what he has, the dimension of Jung-in’s worries looks exaggerated; why can’t his wife enjoy life with him? 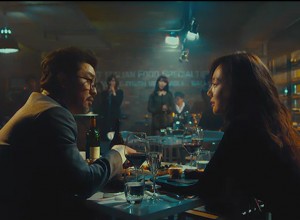 They both need a trigger to get them voicing their displeasure and hidden wishes. This is where Sung-ki comes in. After losing the love of his life, the womanizer looked for love or for a meaning, but he gave up and attempted suicide. Jung-in happens to be there and (kind of) saves him with her big mouth. Only after that, he gets paid to make her fall in love with him and through their interactions, her character is allowed to fully bloom. Finally, somebody will listen to her suffering and will not toss it aside. She gets a job where she does what she likes best: complaining, because to her, that’s a natural reflex to life in general and the ultimate evidence of honesty in a person. The fact she’s valued again and listened to softens her, making Jung-in see her true nature. Although he paid Sung-ki to seduce her, he regrets his gesture and yearns for his wife. Too bad our playboy has a different plan in mind, though.

The title is inspired by a chore Sung-ki gives to Doo-hyun: to write everything he knows about his wife. But the point of the movie is for him to discover her again and understand what she feels, for them to speak in a common language again; they manage in the end to take down the walls they have unintentionally built, which prevented their words from reaching one another and discover love again. It has its fun moments, the actors are excellent and it doesn’t lack depth. So if you’re looking for a movie to cheer you up, but not too fluffy, this is a solid recommendation.

What about you? Have you enjoyed the movie?