Mainstream music, be it Korean, Canadian or French, at some point suffers an identity crisis. The reinforcement of the word ‘entertainment’ in their vocabulary determined that the connection between the terms ‘music’ and ‘listener’ be severed. The song comes with the package, it is not the package anymore. Is she cute or sexy? How are the outfits? How shocking is the video? Music is becoming a plus, an extra for the so-called artist. Furthermore, the attempts to break through and meet the approval of a large public often result in meaningless, superficial songs.

While it may seem to be a small matter, this exact perception on the subject is worrying. Music at its core should be emotionally challenging. Singers should say something through their work, whatever that something is: despair, loss, anguish, hopelessness, anger, frustration, sadness, joy, the will to dance, excitement, love, happiness; there is an unlimited palette of feelings that a singer can use, depending on his or her previous experience and sensibility. They are talented human beings, so they should be able by birth to communicate with their listeners through their music. And indeed, some of them do and manage to attract us. But what about the others? More specifically, what is right and wrong in K-pop in terms of musical value?

The context the music industry has created is not a favorable one, the dynamics in K-pop being awfully intimidating. Artists release their material following promotional cycles. Their work has to appeal in a short amount of time to as many as possible. Adding to the increasing pressure, the already existing fandom has its own vision on their biases’ identity.

IU is the most representative example of the idols’ struggle when trying to hold their own and still charm the others. “Lost and Found” and “Growing Up” haven’t been matched by any of IU’s later albums. The public eye found the initial concept too mature and requested a tween IU with an age-appropriate sound. So she needed to reverse the growing up process and play the aegyo game. She took steps back to please the audience and began to develop in front of the listeners. Ironically, her aim is to reach, at some point in the future, a maturity she had from the very start. Because apparently, this: 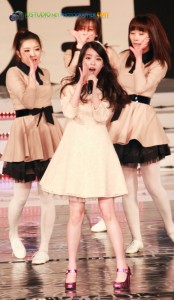 Is a considerable improvement from this:

The pouring rain mercilessly stops me from seeing
The throbbing wind makes it impossible for me to go on
I’m trembling in fear as if I’m standing on the edge of the cliff
And as I’m holding my small hands together, this is my only prayer:
Come back to me

Even though the singer’s lightheartedness and sincerity is omnipresent, one can’t help but notice that her earlier songs are more intense. And it is not just about the lyrics, but herself as well. This image she created, of an innocent and unprepared teenager on the verge of becoming an adult, is demeaning and represents an obstacle in her evolution. She is getting more and more involved in the artistic process, but meanwhile, she stops herself from maturing as a person, fearing she will lose her unique appeal.

Besides affecting the individual artists, the highly competitive market is a factor that causes the devolution of K-pop as a whole. It is difficult to stay relevant. Idols have to release hit after hit, safe choices being nearly always danceable tracks and catchy hooks, more than often lacking substance. It is not to be said there is something inherently wrong with bubblegum pop or fun songs: pretty much every album has fillers and every musician, in his or her career, relied on generic to gather interest. It’s less provoking, but mainly enjoyable. Still, these songs are supposed to be complemented by more meaningful artwork to give the so-called artists the multidimensional image they deserve. This is not to be spotted in F(x)’s or Kara’s discography, making it hard to have a grasp of the groups’ identity. They always play it safe and come up with another catchy, air-headed single. If they were to be placed near bolder releases like Spica, they wouldn’t stand a chance, not because the groups are weak, but because they don’t send off anything. 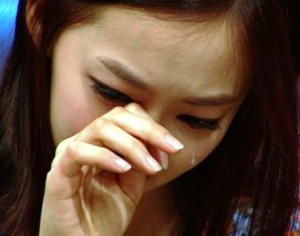 The fact that the idol scene is over-saturated doesn’t help either. It became normal for groups to have untalented members (though there is difference between normal and normative). Dasom may have raised some pity and support with her recent comment about feeling inferior to her fellow Sistar members, but let’s face it: the girl is right. When less gifted persons are integrated into a group, their companies will go an extra mile in order to make it uniform.

Not only is this is altering the quality of the final product, but it is a source of frustration for the genuine singers and dancers. Taeyeon is lifeless and disinterested in live performances, looking often as if she is displeased with the role she plays in SNSD. But Taetiseo’s material helped her chill a bit and steal the limelight. Long live the nine goddesses, but please let some of them explore their potential! Really talented singers have a greater chance of conveying a variety of feelings. Having less, but better members would be an extraordinary improvement. T-ara’s “Time to Love” wasn’t special just because of the rhythm, but also due to the fact that some unnecessary members were tossed aside.

And if we’re talking about fillers, there seems to be a trend in releasing music just as a pretext for the artists to get into the spotlight. Their songs don’t mean a thing, but that is the conventional requirement for someone to get famous. What does Hello Venus’ debut song say? And it’s not just about rookies, but also for the established artists. It practically is that if the idols are known, people will buy the album. Companies sell their artists, not their artwork. They are gifted in pulling all sorts of gimmicks to promote the same old artists and sounds as if they were something new. There should be a rule to stop idols from coming back if they don’t have anything to add. Sure, Sistar’s mini-album was nice, but what did it change? 4Minute’s EP also seemed pointless to some extent.

Nevertheless, it is not exclusively their fault. The K-pop fandom is used to lowering its expectations. The music genre and industry have established their game rules and the public largely agreed to the imposed terms. It is a vicious circle. The manufacturers release a product. The consumers, despite realizing it is substandard, give it a chance. They see promise and wait for improvement. When the offer doesn’t change, it is already comfortable and cozy enough to start looking somewhere else. Instead of asking for better, they become satisfied with what they initially received. How many fans don’t find K-pop a guilty pleasure or an embarrassment?

Despite being aware of all the aforementioned inconveniences, most of us still stick to K-pop. Why? Because, after all, it isn’t all black. If years ago, there was little diversity, right now, there are more worth-watching singers who pour their soul out when releasing material. Ivy’s “Interview” is proof that Korean pop is not emotionally sterile. JYP’s comeback is also worth an honorable mention. The duet with Ga-in brought back the old, soulful R&B. Their recognizable voices and acting made “Someone Else” an instant favorite. “You’re The One” featured some of the sweetest and most clichéd lyrics ever heard, but JYP looks as if he is there, that he meant every single word. And there are dozens of other artists, more or less acknowledged by the public that bring a personal contribution to the music scene:

And if IU’s image was mentioned as an unpleasant aspect, the sincerity of her feelings isn’t. Expanded to K-pop, there is a certain blitheness in this music genre, inimitable by other entertainment industries.

That is one of the most important things that set the uniqueness of Korean music. It is not all over you, it allows you to enjoy emotional or intellectual content while still keeping a casual appeal. Sunny Hill has been breaking stereotypes about groups since “Midnight Circus.” Without shouting or kicking, they released impressive and thought-provoking material: the artist’s condition in “Midnight Circus,” the heartbreaking “Prayer,” the modern man’s existence in ‘The Grasshopper Song” and lately, the social prejudices in “Princess and Prince Charming.” Even some of the rap sequences induce the same mood. That lighthearted feeling invades also Block B’s “Action.” Without having to adopt an aggressive, out-of-line approach, the song is all about laying back and enjoying the moment.

To sum up, K-pop has some issues to work on when it comes to emotional growth and intellectual content. It has its pluses, it has its minuses. And of course, matters are subjective and this article is just a point of view. So what are your thoughts? What makes you tick when it comes to K-pop?