Was SNSD's "Time Machine" PV a Waste of Time? 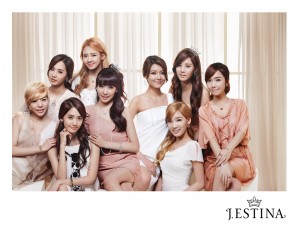 A few weeks ago, I posted with certain glee to tell you all that my secret BFFs SNSD were planning to resume Japanese promotions with the release of a PV for the awesome pop ballad “Time Machine.”  As is customary, the girls teased us twice — first with a 30-second clip of an apparently miserable man, then with a 1.5 minute long clip of all nine of them in extremely varied weather conditions looking appropriately sad and regretful.  The pieces of the puzzle, it seemed, were there: sad man + sad women = an SM artist was finally, finally going to release a music video with a plot!  Surely–surely, they weren’t kidding us, right?  There was really going to be some semblance of a plot in this video, right?  Right?

Well.  Not exactly.  But it was kinda-sorta an improvement over the nonsensical dove-releasing, the excessive use of the matrix cam, and the dancing-inside-a-fictitious-box thing that they normally do…I think?

Anyone who watches this video in its entirety should be able to glean at least two things: 1) despite the fact that one of the teasers quite literally only featured Japanese actor Imada Kouji, he is absolutely nowhere to be found anywhere in this video, and 2) while the video makes a serious attempt to place the girls in some sort of societal context (as opposed to situating them in some mystery snow-filled fairy land with a giant white rock formation), there is…basically no plot to speak of.  And the girls STILL wound up in some random room filled with all manner of inane props.

The PV begins with the exact same 1.5 second teaser that led me to assume that the video would be drastically different from all previous SNSD releases — and one would do well to pay careful attention to this first minute and a half, because the setting in which each of the girls is placed does not change throughout the entirety of the video. 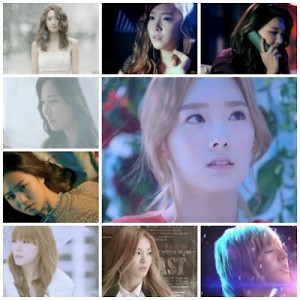 We begin the sound of a ringing phone that nobody answers and a shot of the first of many clocks that we will be repeatedly hit over the head with during the course of our viewing (because this video is about time, get it?)  The girls then show up one by one; first is Yoona, who is walking in what appears to be an extremely heavy snow storm whilst wearing a completely weather-inappropriate (but nonetheless flattering) wedding-esque white dress.  Taeyeon appears next, standing in what I can only guess is a rose garden somewhere in the southern hemisphere, judging by the fact that the weather looks quite nice where she is.  Next up is Sunny (whose outfit is, let me just say it right now, completely hideous to my eyes), who has found herself in a dark alley in the middle of a serious rainstorm, naturally sans umbrella.  Tiffany seems to be caught in the same snowstorm as is Yoona, but at least she was wise enough to bring an umbrella (though I’m not convinced that her jacket, however stylish, is keeping her warm).  Standing against a random brick wall and wearing a most unflattering ensemble is Hyoyeon (c’mon stylists, your bias is showing!).  Yuri is likely in her bedroom and is surrounded by balloons and…tinsel?  Party streamers?  We’ll never find out what these things are or why they are there, but I guess the takeaway point is that something about her iPhone has disappointed her.  In a car with the most generous legroom I’ve ever seen sits Jessica, who writes (what I think is the word) “always” on car’s foggy window.  Seohyun is most likely located in the same country as is Taeyeon, and looks longingly at what I speculate is a photograph (though again, we will never find out who or what it is a photograph of, so yeah).  And finally, there is Sooyoung, who answers the phone that is apparently still ringing after all this time.  One more shot of Yoona in her snowstorm leads us into the music’s first measures.

And that’s basically the entire video.  If you chose not to watch the rest of it, you really wouldn’t miss anything. 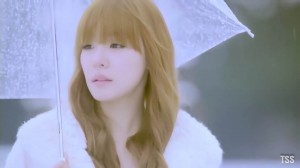 No, I’m serious.  All that follows — literally — is close-up shots of the girls singing while looking sad in their respective bizarre environments, naturally interspersed with group shots of all of them singing in (wait for it) A ROOM that is draped with a nondescript gray curtain and filled with clocks.  One of these clocks looks a bit like the Japanese flag to me, and its color scheme is really distracting.  In these group shots, all of the girls are resplendent in white outfits, which range from flattering to downright hideous (Yoona, I’m looking at you and your shapeless bag dress that appears to be adorned with a pattern of cotton balls).  The lighting choice is, in my opinion, terrible; why do they all look so pale and washed-out?  That they all look white as a sheet makes Taeyeon’s overly made-up eyebrows look even worse than I’m pretty sure they are.  Also, Sunny’s hair is in desperate need of some highlights.

The video ends in an almost befittingly confusing manner, with some of the girls walking out of/away from the environments in which they were so inexplicably situated.  I can’t tell if this is because they decided to move on with their lives after a few minutes of looking sad, or because they’re going back in time (to be fair, there was that crazy shot of raindrops moving upward), or because they just got bored.  There is an oddly long close-up of Sooyoung.  Then, Yoona seems to see someone she knows or didn’t expect to see (maybe it’s an off-camera Imada Kouji?), looks startled for a few breaths, and then takes off running towards said person. Video over. 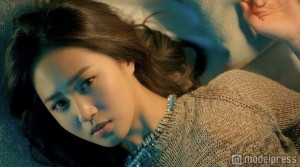 Positives?  Well, despite the fact that I can’t really contextualize or find any continuity between the various locales of the girls, at least they were portrayed in what we can only assume is real society, despite the fact that nobody should ever attempt to run around in a snowstorm while wearing heels and a dress without a coat.  There were also non-Soshies in the video; though their visages are blurred, they are at least there.  And we also got to see the girls kind of do a bit of acting, which is probably a good thing since more of them are showing up in dramas these days.  Some of them even shed a tear or two.

On the other hand, though, was this video really all that different from any other SM video?  It is essentially plotless and features the same overdone scheme that is alternating close-ups and group shots.  So what if the girls are actually featured in realistic places?  Looking pretty in a close-up shot in a realistic place is hardly different from looking pretty in a close-up shot in a glittery, other-worldly box.  Also, the fact that there was no dancing in the video led to an over-reliance on pretty close-up shots that ultimately didn’t really add anything.  Ergo, the video wound up being a somewhat more diversified, yet blandly run-of-the-mill SM production. 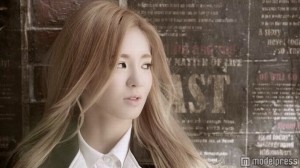 Additionally, is it just me, or did anyone else have a hard time discerning voices in this song?  As a mildly obsessive fan, I am usually quick to pick out who is singing where, but it seemed to me that Hyoyeon, Sooyoung, and Yoona had no solo lines in this song; the fact that there are no close-ups of any of them singing solo parts leads me to believe that this is true.  Not that I’m all about the “Power of 9,” but I feel like that might piss off some of the fans.

I really wanted to like this video, because no words can do justice to both how much I adore the song and how much I want SNSD to do something, anything, that isn’t completely horrible.  Moreover, I really wanted to say that it matched my expectations in a good way, that it finally had a plot that matched the video and was well-executed all around.  However, despite showing a teensy tiny amount of growth, all I can say is that it matched my expectations in that I have been  trained to expect very little from an SM video, and I got exactly that.  Disappointment.

SNSD, I will never ever stop loving you to bits, but you’re making it extremely difficult for me to find something nice to say about you these days — which totally isn’t your fault, per se, but you know.  As Ree pointed out last week, you guys had a stellar debut.  I really hope that the magic starts coming back.  Though the final product was lacking, “Time Machine” might represent a kinda-sorta step in the right direction.  I can only hope that they don’t revert back in time, so to speak, and disappoint me further on their next endeavor.