The 5 Most Bizarre Things in K-Pop in September

My, how quickly time flies! It seems only yesterday that we were roasting our dubious honorees for August – and now it is time to take care of the freshly-baked September crop of bizarros.

Then, without further ado, and in no particular order of importance, here are our September honorees. 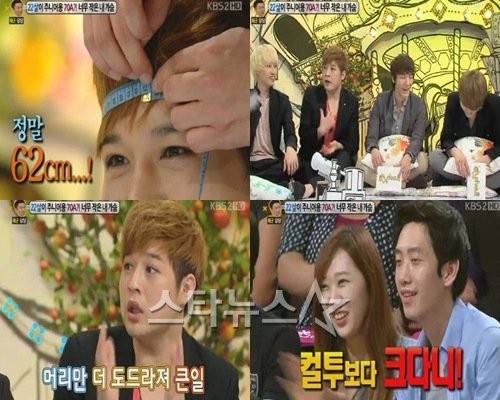 At this point, I’ll pay Shindong good money to shut up. In a matter of about 2 months, he managed to disclose his diet, plastic surgery, do the pitch for his plastic surgeon on Twitter, get his melon measured on national television, and provide solicited and unsolicited advice on just about anything. It is obvious that Shindong subscribes to the school of thought that there is no such thing as bad publicity – and no such thing as being on too many variety shows. I simply shudder to think what other body part he will volunteer to measure next. Too bad a mouth-zipper is not a fashionable surgical enhancement (yet). 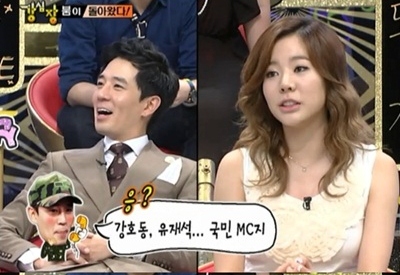 Boom is making his awkwardly-triumphant second appearance on our list. Honestly, nothing against the guy – except I cannot seem to turn any Korean channels without seeing Boom’s mug. It is a complete Boomarama – Boomasaturation, Boomapalooza – I’ll stop, you get the point. Dude, I know that your stint in the army probably led to some extreme case of cabin fever, but give us a break, already. Since the army felt sorry for your heinie and had given you over 150 days of leave, it could not have been that bad. Plus, the disturbingly excessive salivation over pretty female idol guests is bordering on harassment. Many of them are not yet of age, you creepster. 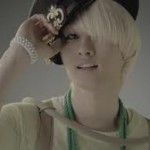 This one was tough. At first, I thought about mailing the trophy to SuJu’s Eunhyuk for this Hitler-in-Paris-inspired look. And before all of you start throwing stones at me for this comparison, look up “sarcasm” in the dictionary. And while you’re at it, Google “Mel Brooks” and “The Producers.”

But then, that lump of coal that serves as my heart started grumbling –  I remembered that I already roasted Eunhyuk last month for the tiara cluster-bomb, am roasting Shindong this month, and it won’t be fair to SuJu’s fans to do a double-whammy on their idols. So, Eunhyuk gets the pass.

Then I thought of awarding Jung Ryeo Won for her Tweety-Twee-Doppelganger-Does-Halloween getup.

After much torment, I decided to give Ms. Jung a pass as well: I’m a sucker for Tweety, plus I could not confirm whether Ms. Jung dressed like this on her own accord, or whether she was in costume for her “Never Ending Story” movie shoot. So, Tweety (and Ms. Jung) got off scot-free this time.

But then I took one look at this photo and thanked Heavens – we have ourselves a winner. And it is none other than 2NE1’s otherwise-beautiful Ms. CL. 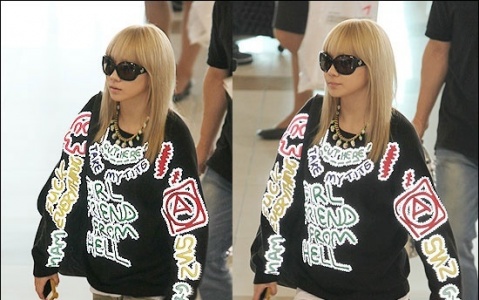 Who should be blamed more – she for wearing this disaster of a sweatshirt or the idiot stylist who possibly gave it to her? I suspect the blame can be divided equally. And before the art connoisseurs start smarting over what statement the artists (Tim Noble & Sue Webster) were trying to make, let me give you one example, for clarity’s sake:  just because Van Gogh is a great painter does not mean that a sweatshirt with his mutilated-ear self-portrait is an indicator of the owner’s good fashion taste.

Let me be even more precise – this sweatshirt SUCKS. As in, some horse’s ass decided to make a quick buck by slapping this monstrosity on clothing, and another horse’s ass decided that it would be a good idea for a young beautiful woman (who is fluent in English) to wear this to the airport, of all places. This garment is right down there in fashion hell next to another horrendous t-shirt label for the douchebags of the world – Ed Hardy. Mind you, this ain’t no photoshoot or concert – this is airport, where, you know, little kids go with their parents to fly on planes – and they are supposed to wonder what deep meaning “F%#k Everything” or “Take My T%ts” has? I could organize a tour of highway overpasses around the world for Ms. CL and the artists themselves – these supposedly-unique sentiments are in full display: but I don’t think they get the label of deep artistic expression – just some jerks spray-painting obscenities. So, for the love of God, Ms. CL – burn that F%&*ing sweatshirt! 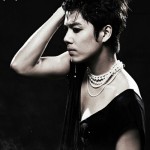 I do not know what stylists in Seoul are high on these days: but there must be a law somewhere against doing this. I understand that Kim Kyu Jong is trying to promote his new mini-album release, but, really? This is supposed to entice me to buy his album? Don’t get me wrong, I am all for male personal grooming, metrosexuality and all other appearance-improving care attributes. But this? Is he in drag? Because the only time dudes can get away with wearing pearls is when dudes are drag queens in costume ready to compete on a RuPaul show. To top that off, the wet shirt/chick dress thingie is making him look like a breast implant recipient. 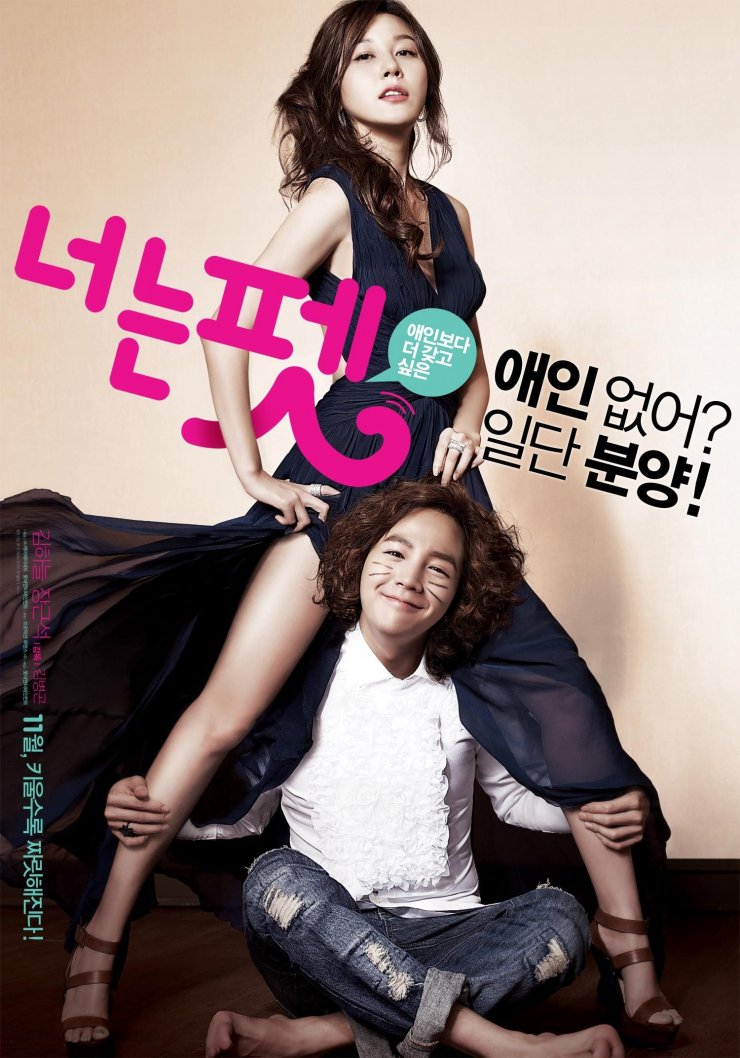 This one is a bit tricky. When I saw the promo poster for Kim Ha Neul/Jang Geun Seok remake of the Japanese movie Kimi Wa Petto, I immediately did a double-take. And it was not Kim Ha Neul’s over-Photoshopped legs, or Jang Geun Seok’s sheepish grin that attracted my attention. It was Jang’s strategically-positioned head and painted-on whiskers that immediately brought to mind a lewd double entendre.  I am fully aware that it does not translate its meaning into Korean, and the movie producers and photographers probably had no idea about this, but it does not make it any less hilarious for the fans of global pop-culture. We will keep Seoulbeats G-rated, but i’ll provide you with a little hint of what I’m talking about in this video.

What do you think, readers? Care to take a deeply-unscientific poll on the whole Naughty Petto issue? Please indicate your preference in the comments section. Here are the choices:

We will tally the votes in our October list. In the meantime, I’m also accepting suggestions for the new bizarro candidates – feel free to indicate the nominees in the comments. Mind you, this is not a democracy, and I exercise full power to pick and choose the crème de la crème. Till October then, miharties.