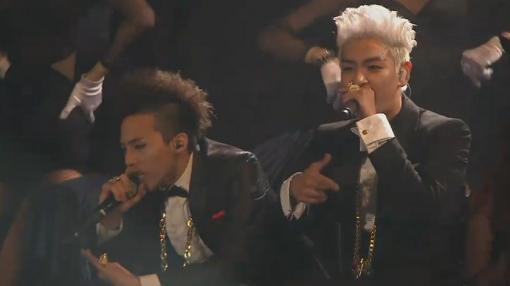 The MV of G-Dragon and T.O.P. ‘s song “Knock Out” has been released via Big Bang‘s official YouTube channel.  The MV is also the ‘theme’ song for LG’s Opimus 2X phone, you’ll see it in the beginning of the MV and the 2X theme throughout the MV.  LG earlier released a teaser of the MV, but why watch a teaser when you can see the whole thing.  The MV has a kind of hip hop, bubble wrapped Willy Wonka look, check it out.

It’s definitely funky.  T.O.P. must have loved having his beloved brick bears featured in the vid and since T.O.P. had his bears, G-Dragon had his Gaho.  I was kind of  WTF with G-Dragon’s funky colored eyebrows in that one section and just how many shoe inerts was he wearing to look almost as tall as T.O.P. in the MV?  I loved the part with the two popping bubble wrap and wearing their beats and the part when their mini-mes were dancing on their hands, but the uh, a** chairs, oh my.  I generally liked the MV because it was funny and complimented the song, the ending was a little weird though, was T.O.P. spazzing out?