It's a Superstar Countdown 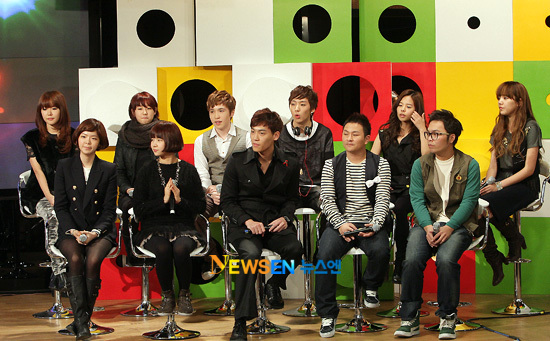 First up was the debut of new girl group trio VNT.  The song and their vocals are not bad at all, but the choreo and outfits gotta go.

The next two performances are by artists I’m not familiar with. The first being a soulful ballad by BMK, but the braids?

Suki is up next and while her singing isn’t bad, if you’re going to be singing on stage by yourself you gotta own the stage and she didn’t. She had a weak start and never really recovered, her voice was overpowered by the music.

Next up is PSY, the sunbae comes back with a strong performance.  The old timers really know how to perform.

Simon D‘s lady love, Lady Jane makes her debut with “Breaking up isn’t everything.” It was a pretty solid performance by Lady Jane even without all the bells and whistles.

Next up was a funky performance by Beautiful Fantasy. They have a kind of 90’s feel, but their sax dude shouldn’t have used a new reed, too squeaky like a goose.

The Superstars were next with the top 11 performing “Let’s Go.” Their enthusiastic performance was well received by the audience especially when a certain cutie was singing solo.

Then American idol turned Superstar K John Park belts out a soulful “In the Rain.”

The winners of the Countdown were the boys of 2PM with “I’ll be back.” Thank goodness someone finally listened to our cries of outrage and the horrible glittery eye shadow is gone (bad stylist noona- it is gone right or am I imagining things?). The next thing we gotta campaign for is to get rid of the god awful headband and hairdo on Nichkhun.

Aaah, don’t you just love fan girls and their chants.  Other performances of the night included Touch, U-Kiss, SG Wannabe, CO-ED, Miss A, 2AM, and Supreme Team. Check out BBSHINeeWorldK2 for these other performances.