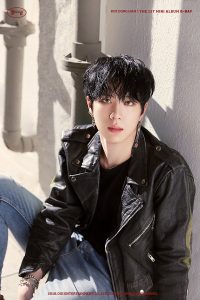 Kim Donghan, former member of concept group JBJ, debuted as a solo artist this June 19th with the aptly-titled mini-album, D-Day. Kim Donghan’s former group, JBJ, was formed alongside Wanna One during the second season of Mnet survival show, Produce 101. JBJ signed a seven-month contract with Fave Entertainment that ended April 30th, despite all six JBJ members expressing a desire to extend their contracts.

Kim Donghan, previously JBJ’s lead vocalist and dancer, wisely decided to waste minimal time before debuting as a soloist under OUI Entertainment. Donghan’s short hiatus would make any discerning listener, fan or not, wary of his debut’s quality. A month and a half seems like hardly enough time to record, refine, and release a cohesive, well-produced album, but Kim Donghan somehow pulls it off.

D-Day is a five-track long mini-album that sounds like the story of a budding relationship. The album’s first track and its namesake is alternative hip-hop “D-Day” that details the feelings of affection that mark the beginning of a relationship. Donghan expresses his desire to be with his lover everyday since everyday with her arouses feelings of happiness and excitement as if it were their first day, or “D-Day.”

Next comes “Sunset”, which is the album’s title track and for good reason. A smooth EDM track punctuated by finger snaps, “Sunset” shows Donghan’s mature and sensual side as he compares his lover to a sunset and its dazzling scarlet hue.  “Sunset” indicates the increasing level of intimacy in this relationship by having Donghan coax her to come to him before the sunrise and stay with him.

Hold my hand, come here, look into my eyes
(Come to me, come to me, baby)
Before the moonlight

See how I’m only looking at you
(Come to me, come to me, baby)
Before the sunrise

In the catchy, tropical house track “Ain’t No Time” — featuring Pentagon‘s Wooseok — the relationship is past its honeymoon phase but still 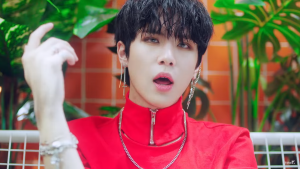 feels new. Donghan marvels over the fact that the sparks he feels are never-ending and invites his lover to hug him, and Wooseok encourages her to stay by his side. “There’s still a lot of places we can go,” Donghan reminds the girl, and urges her to come with him because there ain’t no time.

Donghan then slows down the pace a little in “Late Night Call,” a mid-tempo ballad with an addictive piano background. By this time, the relationship has settled into an comfortable routine where Donghan’s lover feels no compunction calling him late at night. The song begins with Donghan telling his lover that it is nice to talk to her like this, over a piano instrumental, and then picks up the pace as he confesses that he looks forward to everyday because he spends it with her.

D-Day comes to an end with “Record Me,” a contemporary R&B track featuring a rap verse from Donghan’s former bandmate Kim Sangyun. “Record Me” is Donghan’s plea to his lover, or maybe his fans, to record him, so that they can rewatch their memories together and remember him if they ever start to forget. Sangyun further highlights by mentioning “purple lights” — the colour of JBJ’s lightstick — that he still imagines and will keep his arms open for.

Baby, record me
Record me
To remember me, record me
If you’ll ever forget, if you worry about that
When it happens you can bring it up again
So from now on, record me

Donghan and Sanggun’s chemistry from their JBJ days shines in “Record Me,” making it a perfect and poignant, albeit open-ended, note to end D-Day on. Though Donghan and his lover may separate, they will still have their memories to remember each other by. 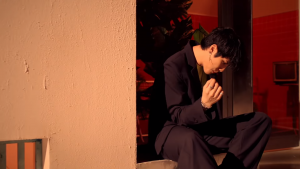 Kim Donghan’s debut album is a perfect soundtrack for a summer fling, full of songs that express the desire for it to last forever, as people often wish summer would. D-Day is a well-produced and cohesive album, filled with songs that aren’t groundbreaking in their composition but are nevertheless catchy, listenable, and highlight Donghan’s versatility as a singer. Donghan’s voice is well-matched to his songs. He sticks to a range he is comfortable with, never over-exerting himself and overshadowing the instrumentals, nor being drowned out by them.

However, the album has its hiccups. For an alternative hip-hop song as well as the album’s first track, “D-Day” is quite bland and cliched with lots of repetition. Although it’s place in the record is forgivable, as it provides the context needed for the next track, the album could have fared well without it. As well as that, Wooseok’s rap in “Ain’t No Time” is short, disjointed, and does not add much to the song, which is already tinged with a hint of auto-tune that does it no favors.

Nevertheless, D-Day is a strong solo effort that intrigues the listener to look forward to what Donghan releases next and inspires them to catch a sunset on the beach, if not a sweetheart. 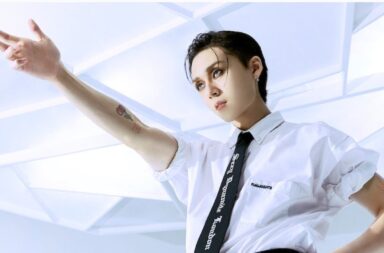