Mamamoo's Moonbyul is a "Selfish" Stunner in Solo Debut 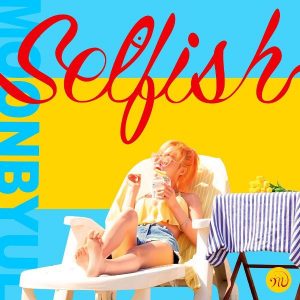 Following the lead of her own group member’s solo career ventures, Mamamoo‘s Moonbyul has finally unveiled her anticipated solo debut with the single album titled Selfish. Center rapper Moonbyul is the latest from the vocal powerhouse retro idol group to release a solo project.

Individually curated songs from Mamamoo’s albums definitely gave fans a sweet appetizer for what kind of musical style Moonbyul would later replicate with her debut. Despite the fact that Selfish only contains three tracks with one being an acoustic version of a previous track Moonbyul performed for Mamamoo’s fifth mini album Purple, the under ten minute EP definitely has its showcase of highs and lows although its potential is clearly potent.

Moonbyul’s solo debut song “Selfish” is a track with a surprising socially relatable theme about self love and care. The term ‘selfish’ itself is stained with an aura of negative connotations and feelings that has displaced its true value with the implication that being selfish is a sin and a transgression of a shortcoming. However, Moonbyul tries to change this negative perception by advising that being selfish is actually needed every once in a while as a form of self-affection and protection. Fortunately, Moonbyul doesn’t have to face the feet of reestablishing the meaning of selfishness alone as she partners with Red Velvet‘s Seulgi for a pleasant combination.

The instrumental for “Selfish” showcases a mid-tempo R&B melody with a combination of rhythmic hi-hats and low base drumming that puts the song into a tame musical trance for better or worse. The song is only able to slightly change from its banal tune when Seulgi hits the repeated refrain after Moonbyul raps for several bars. As mentioned, “Selfish” is a track that is merely pleasant but sometimes pleasantness can tread too close to the mundane and the bland. Moonbyul has shown more than enough skill as a rapper, however “Selfish” doesn’t do enough to showcase her true talent potential and thus it fails to leave behind any excitement from beyond the songs end. 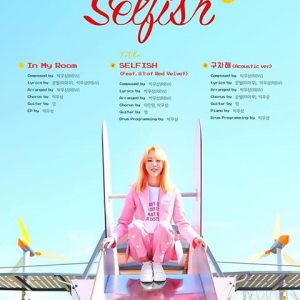 Even as the instrumentation becomes the achilles heel to the track, the lyrical content and the music video succeeds at accomplishing what the instrumentation could not do. The lyricism is thought out and presents a well developed narrative that is at times both funny and charming.

I wanna be selfish, My wish hasn’t all come true yet

Rather than Changing myself to fit the standards of the world,

Following my rules suits me better

The visual that accompanies “Selfish” colorfully demonstrates Moonbyul and Seulgi happily indulging in activities which shows off the variety of self love they have for themselves. In one scene, the girls are dressed head to toe in pink and are taking their sweet time dolling themselves up in front of a mirror. The next scene shows them in neon baggy -but comfortable- attire, wasting their time playing arcade games and trying endlessly to win a stuffed prize at a claw machine. The girls are both carefree and following their own set rules acting on selfish desires because they realize they need to treat themselves, reiterating the unfortunately forgotten practice of loving oneself.

Despite “Selfish” falling below expectations, the opening track “In My Room” from the single album is the biggest high Moonbyul’s solo debut has to offer. There is a bit of sadness knowing the track wasn’t chosen as the title because it definitely showcases a strong potential from Moonbyul, not only as a rapper but as a vocalist. “In My Room” is an R&B track that displays a more mature musical style for Moonbyul that successfully exhibits her unique vocal tone and her talent to adapt her voice depending on the mood of a song. Thankfully it also comes with a visual that rightfully parallels the emotion of “In My Room,” leaving the only complaint to be that the song is too short for its own good.

Moonbyul is slowly carving out her own solo career that differentiates from the rest of her group member’s solo sound. Her first single album “Selfish” should have definitely been composed of just two tracks as the third is merely an acoustic version of the superior original and just feels like a filler to accumulate more time among the already fairly short tracks.

Even so, it is hard to deny that Moonbyul has great potential to further perfect her musical craft and comeback with a track that equally succeeds in all its components. Hopefully, this won’t be the last time we hear from solo Moonbyul as I am already excited for what she has planned next.