While yet-to-debut girl group LOONA has made an impression through their eight pre-debut solos and sub-units, LOONA ⅓ and Odd Eye Circle, there’s still four members to go before the full debut. After a two month break from all things Loona, member number nine, Yves has debuted with “New”. 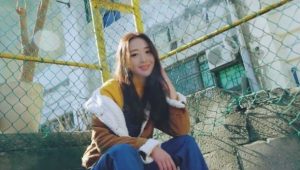 Given the stage name of Yves — pronounced “eve”, like Yves Saint Laurent — it’s appropriate that “New” is visually loaded with apples. She’s eating them, dropping them, and winning them from claw games. Apples are absolutely everywhere. Red apples are, of course, a classic piece of symbolism, usually tied to female sexuality thanks to their aforementioned association with the Garden of Eden. However, Eve didn’t eat the fruit of the Tree of Sex, she ate from the Tree of Knowledge, and that’s where “New” draws it’s inspiration from.

The MV shows Yves gaining awareness and insight into herself as a person. We change as we grow up, both physically and mentally, and “New” focuses on embracing those changes. It’s a smorgasbord of imagery emphasizing Yves coming into her own as she matures. She makes the choice to leave behind her sneakers in favor of heels — another classic symbol of female adulthood. She destroys her childhood toys, and her attempts to play with a childish arcade game results in her getting an apple, as if telling her to grow up and move on.

Yet neither does Yves totally abandon her youth. She has difficulty eating the apples on multiple occasions, resisting the knowledge they offer, and even attempts to destroy a couple. Two of the main settings are a bowling alley and a roller rink. Both are lit with lurid neon colors that speak of late nights and bad ideas, but fundamentally they’re still icons of childhood innocence. Even Yves’s costumes temper her more adult wardrobe choices — her shoes are training heels, and the more risque choice of a corset over a blouse is neutered by how loose the blouse is. 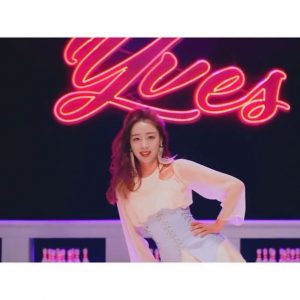 The lyrics further Yves’s self exploration and growth, detailing her struggles to become comfortable in her own skin. She has a moment where she does not recognize herself in the mirror, unable to see the person she was underneath the onslaught of change, but she has another where she does. The confidence, contentment, and trust in who she has become are what she sought and found, and plans on carrying it forward into the rest of her life as this new person.

The only real letdown in “New” is the music. It’s a likeable enough dance track, but it is a little too in love with the tropical house boom. Other than the admittedly delightful thudding bassline, “New” is pretty generic. Yves herself sounds solid, but she’s constantly being overshadowed by the swampy, uneven mix, and the BPM is too low to really dance to.

“New” is truly a charming little song, especially considering the wealth of love songs LOONA’s produced. I love love songs as much as the next person, but they’re something to be said for music that pushes forth the idea of defining yourself as an individual rather than as one-half of a pair. If the rest of LOONA’s debuts are like Yves, I am in favor. Just dial back the mix a bit next time.