50 Shades of Beige in Exo's "Universe" 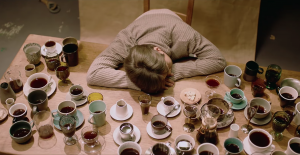 It’s not December if Exo doesn’t release a winter album. Year after year they’ve delighted us with warm ballads and “Universe” is no exception. With its beige and brown colors, “Universe”’s music video matches the song and the cold season perfectly.

“Universe” has no plot: the members lip-sync to the song as they do simple actions and give pensive looks — as it happens in almost every K-pop ballad music video. This is not necessarily something negative: in this case less is more as the music video is very pleasant aesthetically. “Universe” recreates the winter atmosphere perfectly and is a pleasant accompaniment to the song.

The strongest point of “Universe” is without a doubt its well thought-out color scheme: every element of the music video falls perfectly in the beige and brown tones. That said, it probably wasn’t hard to include coffee as a recurring element — much to Xiumin’s joy. Not only are the Exo members are seen brewing and sipping coffee, but there are even close up shots of cappuccino foam and caffe-latte. With so much coffee going on, one would think that “Universe” is some kind of advertising for a coffee shop chain.

Another element that religiously followed the color scheme were the outfits worn by the members. Everyone is wearing coats and sweaters in beige and brown to match the atmosphere and the season. Since warm tones of camel are featured, Burberry was an obvious choice — as seen on Kai’s trench coat and Chen’s shirt. The English fashion giant’s check print is immediately recognisable, and it’s the first brand that comes to mind when thinking of such shades. 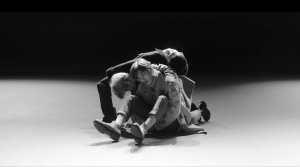 Breaking “Universe”’s otherwise undisturbed usage of browns are some scenes that are shot in black and white, as to create the strongest contrast possible. In these scenes there are coffee beans spilling, a rope’s knot tightening and breaking, and then the members tangled together giving a pensive look to the camera. This could be a hint of some kind of introspection, an alleged “inner dimension” of the members, who are seen struggling.

The clearest form of struggle is Kai’s, who breaks free from some ropes who tie him to a chair towards the end of the MV. He is also running away from something, looking quite distressed. Sehun is trying to untangle a ball of wool and is seen admiring a painting at an art exhibition that is, again, another tangle in the shape of Exo’s logo. Everyone’s problems seem to fade away the moment Suho offers Baekhyun a cup of coffee and Exo all start drinking together— a simplistic yet somehow relatable approach to life. 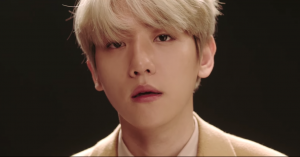 The real protagonist of “Universe” is of course the song. The main vocalists of Exo have nothing to prove anymore, after five years everyone knows how competent Chen, Baekhyun and D.O are. The latter is given the most singing parts — a wise choice given his warm vocal color. D.O might not have Chen’s technique or Baekhyun’s range, but he has the most soulful voice as he showcases in the adlibs at the end of his part in the bridge.

Suho and Xiumin do their jobs more than greatly as supporting vocalists; the fact that they got to sing consistent parts of the chorus is interesting. Kai and Sehun don’t have many singing parts — which is regretful. The fact that they’re rappers shouldn’t be an excuse since Chanyeol sings more and even has a nice harmonisation with Suho and Baekhyun at the end of the bridge. 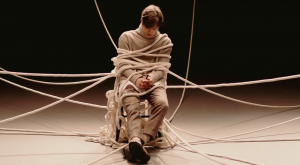 Even if the month of December has almost come to an end, Exo managed to release some winter music, keeping faith to a tradition that has been lasting for four years. For some, “Universe” may not be ttheir best winter releases so far: while not as heart wrenching as “Miracles in December”, it’s a lot more intense than last year’s “For Life“. Yet, the powerful vocals and instrumentation keep on growing to create the perfect balance for a winter ballad.

“Universe” is a pleasant release, and there is not much else to be said about it. While it’s remarkable that the music video doesn’t get completely overshadowed by the powerful song, it’s also hard to remember much more than the nice brown tones. The “Universe” music video manages to enhance the song without distracting the viewer too much from it.