Honeyst Are Sweet On "Someone To Love" 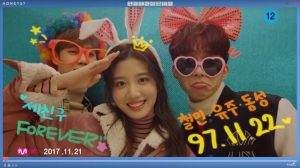 Honeyst is FNC’s latest boy group, an acoustic band with an unironically saccharine concept. “Someone to Love” is the first comeback following the group’s debut and remains creatively consistent by leaning into every genuinely soft trend of the season. Honeyst walks a nostalgic path reminiscing about old forms of communication and superstitions associated with infatuation in their new video. The effect is pleasant, to both the ear and the eye, but whether Honeyst will be able to distinguish themselves from the crowd of rookie boy groups with anachronisms and lolly-pops remains to be seen.

The MV for “Someone to Love” is conceptually simple but it’s executed with charm to keep things interesting. The plot is basically a chain letter with the message, “if you do not confess as soon as you have received it, you will have a great misfortune,” written on it and passed between three couples over a span of 27 years. It’s not an elaborately constructed story but it’s executed cleverly to keep the viewer interested. A lot of the elements are more explicitly explained with text in Korean through messages, the time-traveling letter, and other inserts. This may feel like an obstacle to fans who don’t understand the language but the intentions of the characters are clear without knowing exactly what is being communicated. That being said, the messages being passed between the characters are pretty adorable and understanding with simple statements like “I want to have a relationship with you” and “I like you a lot” adding to the atmosphere of the video.

The MV relies on subtlety to elevate three run-of-the-mill confession storylines to be endearing. Most of these touches are nostalgic rituals different generations carried out to show and test affection.  The first vignette set in the 90’s has a Motorola beeper encoded with the message “I love you. I really love you”, a compatibility game, and folded paper cranes for luck. It’s really sweet to see a few of the familiar superstitions people use to bolster their confidence before saying their feelings. 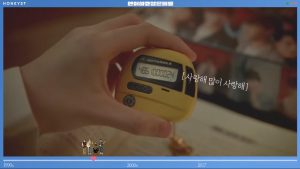 Small touches, like the fact that the progress counter is a moving image of the band, and their outfits change as they travel through the years, are the best part of the MV. All the little things are executed in a way so they feel, if not completely fresh then at least still enjoyable. The concept of the tim- traveling letter, which spans over two decades is used to cleverly integrate the trend for things past which is currently in vogue. Thankfully, the decades tackled here are the 90’s and early 00’s and not the 80’s for what feels like the millionth time.

In terms of sound, Honeyst is, again, inoffensive, acoustic easy-listening. The full instrumentation kicks in a little later than one would expect and the oohs at the end are so lovely to listen to it feels like their vocals as a group were slightly underutilized. The repetitiveness of the chorus is offset by how interestingly the production treats the backing music. The simple romance of the lyrics is given dimension by the instrumental creativity and whimsy, it’s done very well but could be pushed further to be more memorable.

The imagery of the MV supports the lyrical content and sonic mood of the song too. The song makes references to text messages, being anxious about confessing and communicating through technology which is a key element to the all the stories.

I confess my feelings on the phone

I really love you 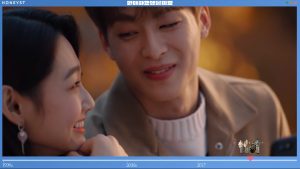 The creative cohesiveness of the sound, content, and visuals in “Someone To Love” is easy to process and the attention to detail is admirable. It’s the kind of MV that’s pleasing to watch and as you get the inside jokes it brings a smile to your dial. Honeyst has done well enough without many songs, to craft a particular wholesome niche for themselves. This song and video certainly fit into their image and are well-executed. The only drawback to is the source material is so commonplace that it’s possible their subtle excellence will be lost in the noise of competition. Someone To Love is a bit like a piece of honey tea cake: it’s a light, familiar treat. Hopefully, it will suit enough people’s taste to have Honeyst make many more little slices of sweetness in the future.