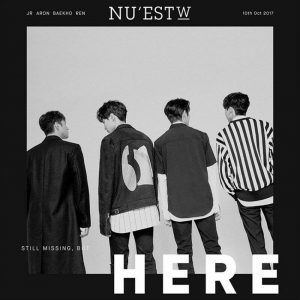 With one of the greatest fairytale-like revivals in K-pop history from the second season of Produce 101, Nu’est W has made their comeback as four — with Minhyun being on hiatus from the group due to his participation in Wanna One, with W, Here. The reason behind their name Nu’est W, is incredibly sweet, as the “W” stands for “Waiting”, as in waiting for Minhyun. It’s very thoughtful that the four still actively consider Minhyun in everything that they do, and it speaks volumes to how close the group is. The group’s previous comeback was with Love Paint in August 2016, so it has been a long time coming.

Nu’est gained overwhelming support from their time on Produce 101 and so one of the biggest questions that people had for the group was: would they be able to take advantage of this newfound popularity to continue this success in the long run, or would they drop as quickly from the spotlight as they entered?

The title track, in this case “Where You At”, can make or break the album, and fortunately, it’s a solid enough song to appeal to fans as well as a wider audience. It appears to go down the route of EDM and house, which has been incredibly popular in K-pop recently. Unlike most tracks which kick off with vocals, “Where You At” starts with a deep rap that cleverly transitions into the higher-pitched vocals. The soft buildup right before the chorus, which features interplay between Baekho’s powerful vocals and the synth instrumentals, creates dramatic contrast to add to the strength of the overall track. The only thing about this track, however, is that it, much like other songs of the similar genre, can come off as repetitive with relatively little melodic development especially in the chorus.

The only other song that features the whole group is “My Beautiful,” the first track off the mini-album. In complete contrast to “Where You At,” this song is more toned down being softer and slower, all in all giving major nostalgia vibes. While the title track is all about that power and energy to pack a punch, “Where You At” focuses more on the emotion behind each and every vocal and rap part, and the members deliver beautifully. 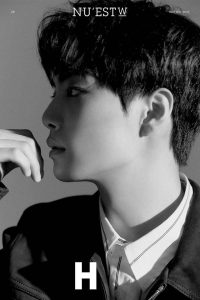 The remaining four tracks on the album are all solo pieces, which can be strategically advantageous as it showcases each members’ strengths and individual style. On Produce 101, the members competed individually, so this may be a good opportunity for individual fans, or even just general fans, to appreciate their bias. Furthermore, Aron was not on the show, and more recent fans may not know much about him, so this is a good way for the general audience to gain a better understanding of the members.

Aron’s “Good Love” is much lighter and more interesting melodically and harmonically, with an abundance of tonal shifts to keep listeners on their toes. He smoothly transitions between singing and rapping, with a greater emphasis towards the former), to demonstrate his ability to do both.

Ren’s “Paradise” is a regal-sounding track driven by a strong bass line. While Ren may not hit the high notes like Baekho, his powerful and rich lower range carries the track amazingly well to match the majestic instrumental.

After Ren’s vocal solo and Aron’s vocal track with a bit of rapping, it only makes sense for the group’s rapper, JR, to make an appearance. His solo, “With,” is two minutes and fifty-one seconds of pure gold. Starting off soft, it gradually crescendos to an emotionally-charged chorus, his rich and deep voice perfectly complementing the delicate vocal chorus.

Of course, we have to end on a high note, with the member who is in charge of the high notes — Baekho. His solo is a classic nostalgic ballad, complete with orchestral-inspired accompaniment. This genre is perfect for his voice, and he fluently transitions between the lower verses and the higher ranges of the chorus, expressing just the right amount of emotion. 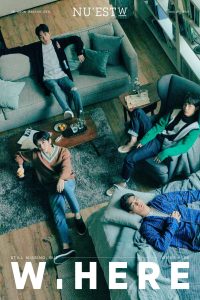 After their success on Produce 101, I wouldn’t say that Nu’est has completely changed up their style. They have built on their previous album Love Paint to amplify the rich, luxurious sound that is ever present in W, Here, a very solid release that proves them worthy of all the support they have received. While their songs may not be as energetic as the typical pop tracks out there, it is what they are suited to the best. And by playing to their strengths while standing out from other groups, they will hopefully be able to maintain and expand their popularity as well as to continue to grow as a musical group.