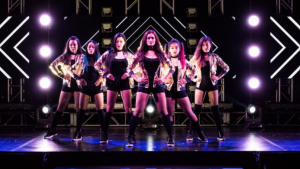 We continue to witness the globalization of K-pop on both the small and large scale. This is the overarching plot point in the off-Broadway hit KPOP the Musical. KPOP the Musical is an immersive theatrical experience that took the concept of full immersion to the next level both physically, emotionally and culturally. As an audience member you experience three harrowing plot points: the struggles of being a “good Korean” from the perspective of biracial and American-born Koreans, the rise and potential demise of an idol, and the ugly truths of the entertainment industry in both Korea and America.

KPOP the Musical, an Ars Nova show, is both a theatrical production and an immersive experience. Upon entering the A.R.T in New York City you’re immediately thrown into what appears to be a concert-like setting. With access to drinks, and a variety of wristbands for each attendee, audiences are quickly introduced to the main characters of the show. The cast is made up of varying members of one entertainment company, JTM Entertainment, which consists of five-member boy group F8 (pronounced ‘fate’), six-member girl group Special K, solo star MwE, CEOs Mr.Moon and Ruby, and Jerry Kim, the American ambassador and the show’s narrator. After a colorful opening number, the audience is thrown into the K-pop factory tasked with breaking into the American music scene as the main objective.

All attendees are ushered into adjoining rooms based on their wristbands, and instantly thrown into the complex and ever relevant conversation of what makes a “real Korean” as you witness the struggles of boy band member Epic, who is American-born and speaks little to no Korean, attempt to connect with his Korean-born bandmates. Tensions become high as the band fights to stay true to themselves while wanting to break into the American market. The debate hits a boiling point when Epic is accused of recording over the group’s songs in English, a language the majority of the group does not speak. Callous words are thrown around as the original band members accuse Epic of being a “less than” Korean. 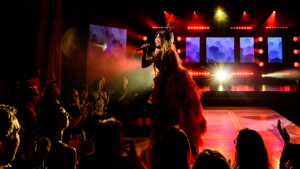 This theme is similar to that of narrator Jerry Kim–the only biracial member of the company. He is consistently challenged with the duality of his identity. Throughout the entirety of the show you witness him struggle to communicate due to his American upbringing, understanding of the American music market and inability to speak Korean. Through Jerry and Epic, we see the unfortunate realities of Koreans questioning other Koreans based on their inability to to speak the language, their mixed race and their American upbringings.

These themes are not new to the realities of the K-pop industry. Recently we have seen the struggles of biracial idols in the spotlight when Produce 101 and eventual I.O.I member, Somi, reduced to tears recounting the moments in her life she was ridiculed for being a mixed Korean. At this moment in the show it became very evident that the audience was going to be forced to address cultural and societal issues.

We are then shuffled into various rooms based on our wrist bands based on whether or not you purchased the VIP experience, much like a K-pop concert. As we made our way through the space, our group’s next destination was the dressing room of solo female idol MwE. MwE was joined by Ruby and the tension instantly became palpable. There were undertones of an abusive past with MwE and an undercut of her talents and ability to break out of her “upbeat dance ballad” facade to perform heartfelt ballads. It reached a boiling point when Ruby introduced Sonoma, a Special K member being groomed to follow MwE’s footsteps by going solo. Sonoma raised the stakes when she revealed that she was able to complete college, learn to play instruments, and write her own music, all things MwE was unable to do as she left school at the young age of 10 to become an idol.

It became clear that JTM was pitting the rookie idol against her seasoned senior, a theme we’ve had the unfortunate reality of witnessing with the disbandment of many Golden Age girl groups, 2NE1 in particular. Sonoma was afforded the ability to grow up, and grow into the artist she wanted to be, while MwE was thrust into idol life at such a young age that she doesn’t know anything else. This scene brought up a number of questions. At what age are idols being recruited? Groups like NCT Dream are incredibly young and have already debuted. Are they being given the space to mature? What is the life cycle of an idol, and what is the responsibility of the company to support seniors without inherently pitting rookie groups against them? 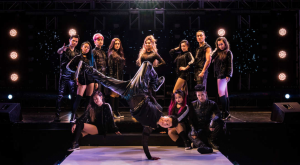 The overall concept of the show is that you have entered into a K-pop Factory. Within the factory, the mission is to churn out the best of the best idols able to break into the American music scene with stunning good looks, hip choreography and “American” appeal. You truly experience this theme once you interact with the on-staff plastic surgeon, the choreographer and faux “red carpet.” It’s in these rooms where you as the audience are forced to address Korean beauty standards, the push for perfection and even racism.

In this segment you travel from room to room. In one area, you visit the plastic surgery doctor’s office. A young star of the girl group is being pressured to completely change her face. After she declines the surgery, the audience is pushed into the dance studio where a dancer is put to the test rehearsing the same eight-count for 15 minutes and having a candid conversation with the choreographers about pressures put on the girl’s face for perfection and the sacrifices made. It is within the dance studio you face the concurrent theme of the musical: racism within Western media.

As K-pop fans, we’re aware of this reality. We’ve seen idols ridiculed for their accents when attempting to speak English, and having their successes diminished simply because they are not from America. The audience came to the realization that even in the attempts to be Korea’s version of a “perfect idol”, they would have to take on a completely different personality–even learn another language–to break into the American music scene the way in which the factory intended.

Thankfully, there is a happy ending. Mr. Moon and Ruby come to the realization that they’re Korean and they make Korean pop so they’ll stick to what they know and what they and the idols do best. Jerry Kim comes to accept his biracial identity and that not knowing Korean or not being Korean-born doesn’t make him any less Korean. And with a riveting closing performance, we see MwE and Special K co-exist and the boys of F8 embrace their differences, including their foreign-born English-speaking bandmate Epic, in order to highlight their charisma on stage. 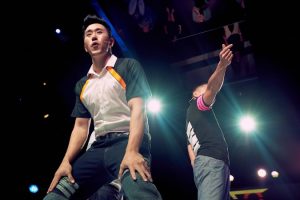 This musical takes on so much of the realities that exist in K-pop and Korea that this could in all honestly be a two to three part review. I cannot personally speak to the conversation and debate of what makes a “good Korean.” All I can say as a biracial woman myself is that I sympathize wholeheartedly with the realities of not being good enough for either group you identify with. And I can only personally attest to the racism that is prevalent in all forms of American media and how that remains the barrier at large between the Korean and American music scene.

From my observation, this struck a chord with the diverse audience in a lot of ways. Many of us are aware of the harsh realities of the K-pop industry. From the brutally long hours of rehearsal, to the training and dieting to fit the current beauty trends, and the constant effort to appeal to a global audience through being multilingual and versatile, these are realities we often put in our subconscious while streaming albums and freaking out over our bias. Let KPOP the Musical serve as a reminder of what your favorite groups go through every day starting at a young age to entertain you.

Should #BlackLivesMatter in K-pop?

Turning Back Towards Trot