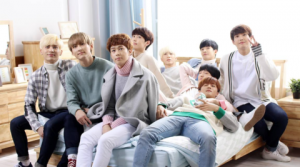 SF9, a nine-member boy band from FNC Entertainment, has released their first mini album, Burning Sensation, and they have proven themselves to be rather promising.

Previously part of the FNC Entertainment trainee group, Neoz School, the nine boys were introduced to the public in May 2016 through Mnet‘s idol survival show, d.o.b. (Dance or Band). Much like YG Entertainment‘s WIN: Who Is Next?, SF9 — previously known as Neoz Dance — had gone up against four other FNC trainees — Neoz Band — and emerged victorious. Their triumph had earned them the chance to debut.

A mere four months after they made their debut, the boys have come back with six new tracks, and they really are burning it up. This newest album takes its role in helping the rookie group craft its identity very seriously, with all six tracks being some variation of electronic pop. And given that SF9 is, indeed, marketed as FNC Entertainment’s first boy dance group, this choice of production is no mistake. 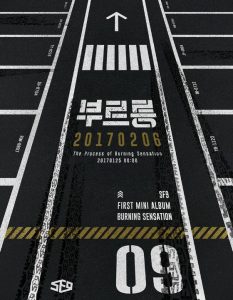 The album begins somewhat shakily with a two-minute-long track, “Youth, Tell Me What It is”. Centering on the idea of a broken-hearted youth choosing to strive on to become stronger despite his sadness, a reflection of this tension can be found in the music. The verses, which lament the lost of love and highlight the agony, are distinctly quieter, and the second verse features the use of a piano, giving the music a mellow tint. Echoing and distant sound effects can also be heard clearly in the verses.

In contrast, the pre-chorus and chorus are emphasized by strong snare drum beats and a powerful boom bass. The success of this first track is hindered, however, by the delayed beat drop at the start of the chorus. It throws the listener off; rather than heighten anticipation, the delay results in the chorus falling flat instead. It is a bit of a shame.

The album’s title track follows close on the tails of this first introductory track. Edgy and smooth, “Roar” presents the boys of SF9 as young, handsome, and dangerous boys partying it up. While these first two songs are not bad, the album picks up substantially from the third track onward. “Still My Lady” acquaints us with the boys’ softer, sweeter sides as they sing about missing an ex-lover, about how despite the break up, they still find her beautiful. “Shut Up and Lemme Go” comes after, with an extremely catchy chorus, and an even catchier electronic instrumental break. 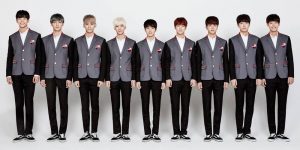 “4 Step”, the fifth track of the album deserves special mention for its impeccable interweaving of the sweet and the fun. Singing about wooing a lady, the boys of  SF9 liken the subject of their interest to lovely, magical quintessences such as dreams and the milky way. However, their enchantment with the girl is also tinged with excitement, underscored by their playful personalities. This is reflected partially in the other sections of the lyrics, and also in the upbeat, groovy music.

First, I’ll confess to you; next, I’ll be playful

I really wanna make you my baby

Third, I’ll sneak up on you; look at me, eye contact

Finally, the album wraps up with “Jungle Game”, which reminds the listener slightly of a computer game soundtrack with its heavy reliance on electronic sounds and inclusion of onomatopoeia. This child-like auditory connection, however, is oddly congruent with the youthful image of SF9; instead of sounding cheap, it adds to their gradually developing identity. And with these lyrics about conquering and winning, SF9 finishes their first mini-album on a solid note. 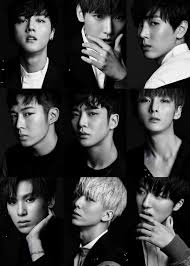 Overall, Burning Sensation impresses. Despite a wobbly start, it is remarkable that while all six tracks are upbeat and share a similar dependence on an electronic pop style, each song still manages to retain its own unique colour. Transitioning from track to track, the listener is re-engaged every time a new song comes on. This is even more exceptional upon the realization that no ballads are included in this mini-album at all. Furthermore, the decision to leverage on the boys’ youth and sparkle worked wonders. Their zest and effervescence could be felt viscerally.

For a first mini-album, SF9 has exceeded expectations. If only to be nit-picky, it would be good if the boys could work on their lyrical content in future albums. Musically, they have proven themselves to be quite sound; if they continue to produce at this level of proficiency, lyrics of greater literary quality would probably set them a mile apart from other rookie groups. Here’s to the start!