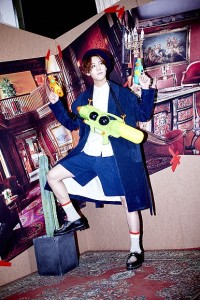 Star Empire Entertainment, home of Nine Muses and Z:EA, has expanded their roster with the new 5-member boy group Imfact. They debuted with the song and MV Lollipop, which evokes a very teen-like pop-y image. The video is full of bright colors, down to the pink and teal hair on three of the members, and the song is simple, repetitive and also very bright — a perfect recipe for a perfect pop song.

However, the background of the song is more R&B and jazz influenced, as is to be expected from Star Empire, with plenty of harmonies, trumpet line and belted high notes. That gives it a bit of a more classic feeling rather than the current modern trend to use hip hop influences for pop songs.

At first, I found myself entirely unenthused by the song and video, but after a couple listens the song really began growing on me and I realized that in fact I was feeling refreshed by simply watching a talented group of rookies have fun. With big companies hyping rookies up so much before they even debut, we’ve forgotten what it’s like for our actual first introduction to a group to be their first full, professional music video. Not a pre-debut performance stage, not a reality show, not even multiple clips of them already singing and dancing. Suddenly, if that first actual debut MV isn’t something immediately spectacular, we’re left wondering what went wrong.

With Imfact, nothing at all went wrong. The MV was full of good clean fun. The boys got to show off their dancing and singing skills, martial arts and their abs, and we got to watch a bright, upbeat MV whose setting actually felt realistic and logical, and was paired with a catchy, upbeat song. 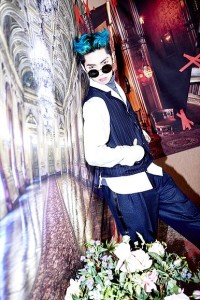 The video is mostly a high school set and outfits for the members, which actually seems to fit them. They are able to act and sing innocently with no problem, and when the scene switches to a more casual, college-like setting it’s a natural progression which acts to add a larger audience of fans. Showing the boys as effortlessly appealing to both teens and fans in their 20s hits two birds with one stone. The lyrics of the song also work to appeal to more ages, being very innocent but still charming.

You’re so cutesy cutesy, your dimples are like sweet rice cakes
Why is your body so beautiful?
Your eyes are like the ocean waves, I could fall into them
What do I do? I’m going crazy

Although there is one section in the rap verse that reinforces the idea of ownership over the woman being sung about, beyond that, the song is quite positive.

Your body makes the whole world go crazy
Wow hey, what are you looking at?
You want what you can’t have? I already have dibs
So turn your head, go find your own, bye bye 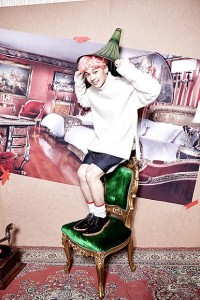 The jazzy aspects of the song are reinforced by the interesting voices of Tae-ho, the raspy main vocalist, and Ung-jae, the maknae with the deepest voice. It’s also quite clear that all five members can sing quite well — Je-up takes most of the background high notes throughout the song and Tae-ho shows as well when he belts out his impressive ending high note accompanied by a Michael Jackson dance. While they’re still rookies and can definitely improve more, Imfact have a good amount of musical talent to work with.

Of course since this music video was all about showing off, the elements of bromance that fans love so much could not be left out. In the midst of goofing off in the high school locker room, three of the members gang up on another member, Sang, and try to half-heartedly undress him. When Sang finally frees himself, he runs headlong into the naked torso of the remaining member — the very attractive Je-up — whose official hobby is exercising. They also try to dunk Ji-an with a bucket of water over the wall of the restroom stall, and Je-up shows off a very impressive front-flip in front of the class, which unsurprisingly gets everyone excited.

Although Imfact’s debut required a couple additional watches and listens, I’m really enjoying this debut a lot, mainly because of the catchy song and fun MV. I am very much looking forward to seeing what Imfact continues to do.

What does everyone else think of Star Empire’s new group?

Imfact Wastes the Potential of “Only U”