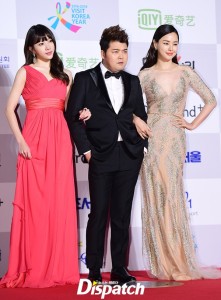 The 25th Seoul Music Awards took place on the 14th of January at has been presented by Sports Seoul since its inception in 1990. This year’s edition was aired on KBS from Seoul, and hosted by Lee Honey, EXID‘s Hani and Jun Hyun-moo. Exo were the big winners of the night, taking out the daesang and the Hallyu Special Award. Exo was also one of the twelve bonsang winners, which included EXID, Red Velvet, Taeyeon, Vixx, Zion.T, Yoon Mi-rae, BTS, A Pink, Sistar, Big Bang and Shinee.

You can find a full list of winners below; but before that, here are some of my highlights from last night’s ceremony — be sure to share your favourite moments in the comments below! All of the winners performed in this rather quick-paced ceremony, with the notable exception of one person:

SMA Needs Junsu’s Name, But Not His Presence Apparently

JYJ‘s Junsu bagged the popularity award, which was decided pre-show through a paid voting system open to the public (i.e. fans). Despite being a winner, though, Junsu was a no-show at the ceremony thanks to an ongoing broadcast ban placed on JYJ. Nevertheless, Junsu apologised for his absence and lack of control over the situation on Instagram. Later, Junsu showed his award to fans via the V app.

But while KBS was too scared of SM to let a JYJ member be caught on their cameras, they apparently weren’t scared enough to not include him in the popularity award nominations. And they seemed perfectly fine with letting Jun Hyun-moo use Junsu for some ‘banter’ with Hani. Hani actually shed tears; though a debate is ongoing as to whether she was upset over mention of her relationship, or if it was the injustice of her longtime fave being prevented from appearing on broadcast — again — that got to her. Jun Hyun-moo hasn’t escaped the public’s ire either.

SMA’s New Artist award is generally award to three rookies: this year, they were Seventeen, G-friend and iKon. The three groups took to the stage soon after receiving their awards to acquit themselves admirably with their performance skills. In addition to “Adore U,” Seventeen also pulled out B-side “Rock.” Meanwhile, iKon performed “Apology” and “Dumb and Dumber” AKA my new favourite iKon song.

G-friend performed their two title tracks against a magical woodland backdrop; the group’s stylists attempted to introduce variety to the usual pastels with some bedazzled sweaters; however the black backing of the bling, without anything to balance it out, threw off the whole look. Everything else about their performance was up their usual standard, but these outfits stand out from their usual soft look in a bad way. The stylists should have used white backing and gone all out with the bedazzling (rather than just sticking to the hems), though I guess budget and time could be factors. Also, that shade of green does not go well with white/off-white.

On The Other Hand, Red Velvet Won The Outfit Lottery

Rejoice, for Red Velvet finally got to go back to their sporty outfit roots! After spending so many awards and end-of-year shows in maid outfits, seeing the members in street wear was a sight for sore eyes. Seul-gi rocked the double denim, that plaid flannel looked great on Yeri and I absolutely need Joy‘s red Bruce Lee top for both sartorial and educational purposes i.e. so I can learn to differentiate Kung Fu artists who have appeared in American movies, while looking cute.

BtoB‘s Min-hyuk introduced Yoon Mi-rae to the stage, but it wasn’t long before she was joined by the other members of MFBTY, Tiger JK and Bizzy. As has been their habit with televised live performances, the trio was soon joined by Red Velvet’s Wendy (who appeared to be miming), BTS’ Rap Monster and Exo’s Chanyeol for a sequel to their Dream Concert performance. Other idols couldn’t help but join in on the fun: the rest of BTS greet Rap Monster on his way to the stage, while the remaining Red Velvet (and apparently Exo) members managing to get up on stage towards the end of the performance.

But even with all those cameos, this stage didn’t have the most collaborators…

… That honour would go to Zion.T, who had the whole crowd singing along to “Yanghwa BRDG.” With a stadium of voices and that giant screen flashing gorgeous animation and lyrics, there was nothing left for Skinny Red to do except bask in the warmth. Oh, and sing.

Twice Gets The Mozaic Treatment 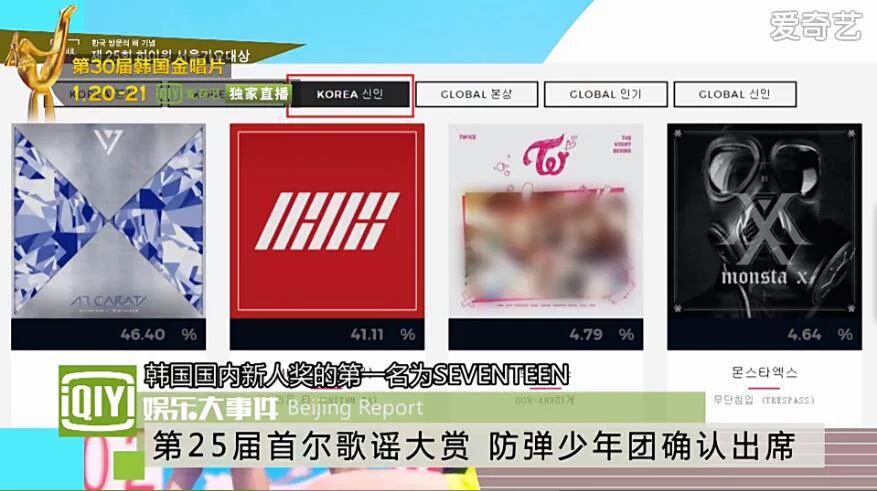 JYPE was nowhere to be seen at the ceremony, and fans have been speculating that the recent controversy surrounding Twice‘s Tzuyu was the reason. With partners like iQiyi, I guess it’s not surprising that SM would bow to any Chinese pressure, actual or perceived. Twice was nominated for the New Artist award; and while I personally didn’t think the group was going to win, seeing the group’s album cover blurred out still left me feeling uneasy.

Songstress Jang won the Best OST award for Kill Me Heal Me‘s “Auditory Hallucination.” Her performance with Seventeen’s Wonwoo didn’t need much in the way of visual spectacle, but I have to admire the production of this stage, solely for the perfect synchronisation between the live singing and the digital lipsyncing done by the version of the performers on the big screen. Considering that even G-friend struggled a tad on that front, successfully pulling off this kind of thing seems it would be harder than it looks.

With Exo’s monumental sales figures, it would be surprising if they didn’t win the daesang, even for the third year in a row. But what added to this round of acceptance speeches was the fact that it was Kai’s 22nd (international) birthday. Exo fans unfurled numerous small banners and sang “Happy Birthday” en masse. And when Exo accepted their daesang, the MCs encouraged Kai to bust out one of his signature pirouettes, which he did.

While the performance of “Love Sick and “View” was good, it was off-stage where Shinee provided the most entertainment. They seemed to be the party table, with the members often caught on camera dancing during others’ performances. Jonghyun also got caught out biting his finger(nail?) and Onew received fan love from one of the presenters. To cap it all off, Key used Shinee’s bonsang acceptance speech to drop a mention of Taemin’s solo comeback.

BtoB Hams It Up

Like Shinee, BtoB also gave a lovely performance … And they also gave great face. Many an idol was caught off guard by the camera, but they were able to rearrange their initial looks of surprise and shock to something more pleasing for viewers, like a smile. BtoB, however, went in the opposite direction. Looks of abject horror decorated the members’ faces, with Chang-sub being the most memorable purely through perseverence — he was the .jpeg to everyone else’s .gif. Not what you generally expect from an act that wins awards for ballads, though their human pyramid on the red carpet should have clued me in beforehand.

The Bangtan boys gave their all for that performance; there was an intensity that burned so bright my eyes almost watered while watching this stage. The 360s the camera insisted on executing dizzied me a bit, but BTS took it in stride and made the best of it. And while I thought “Run” was already full of punch, BTS managed to amazingly kick things up a notch when they launched into “Dope.” No fancy graphics, no flashy outfits — just the members and their incredible, which could have been used to power a small country.

BTS barrelled through that performance in an almost violent manner, leaving me slightly out of breath afterward. I don’t think I’ve ever had such a visceral reaction to a BTS performance, but here we are. Will 2016 be the year I become a BTS fan? I’m looking forward to finding out.

Despite doubts surrounding her win for record of the year, BoA impressed me a lot on the night. Masculinity and femininity were beautifully juxtaposed in her set. First, BoA and her male dancers performed a red, military-inspired version of “The Shadow.” It was light on any actual singing, but it was an understandable change considering the vigorous dance break that concluded the song. “Kiss My Lips” saw the stage turn blue, and the male dancers replaced with fan-fluttering women. The dancing seemed to have left BoA out of breath, and it took a while to recover; but when she did, she sounded great as ever.

This set was wonderfully thought out, and while the execution wasn’t 100% perfect, BoA ulitmately did justice to the concept. 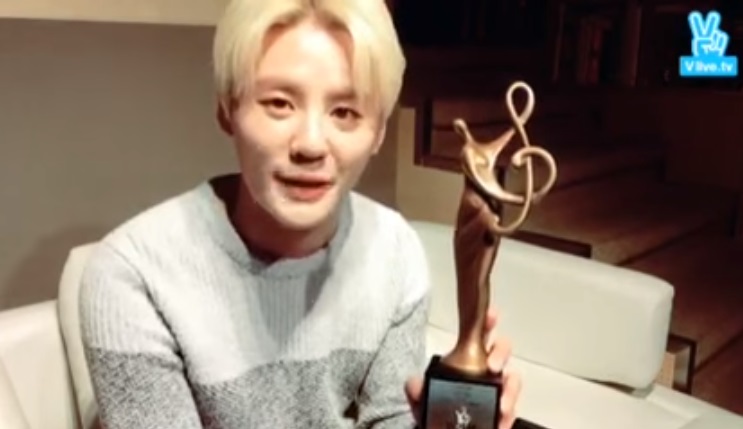 Record of the Year: Boa’s Kiss My Lips