A Promise For The Future in Xiah Junsu's "Yesterday" 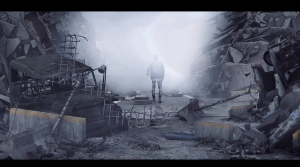 This has been a strong year of music releases. Xiah Junsu, who goes by the stage name Xia for his solo works, had released a stunning album earlier in the year with the impeccable Flower, and he continues to grace us with his latest title song “Yesterday,” which is billed as his first ballad single.

“Yesterday,” at its core, functions as a love song but the lyrics hint to underpinnings of being a promise of devotion to his fans  — with the other two members of JYJ currently fulfilling their mandatory military obligations, there has been speculation as to when Junsu would enlist as well — who he hopes to walk down the road with at a later point in their lives and career.

“Yesterday” is absolutely stunning. Composed and penned by Lucia, it has sparse instrumentation — opting for the piano with some strings accenting the song from the first chorus onward. Of course, the most compelling aspect of the song lies in Junsu’s vocal delivery. He has a penchant for emoting and “Yesterday” finds him projecting from a very personal space.

Junsu is one of the most talented vocalists in K-pop, and it is because he has such a gifted command of his instrument. He has an ability to power through notes but always finds a way to inject emotion and connect with his audience. “Yesterday” does not require Junsu to belt, instead showcasing a softer lamentation about his uncertainties and anxiety about a future — undetermined and unpredictable. His voice doesn’t necessarily flex with outright power, but exercises a softer power, one that intimately unsettles your core and sticks with you like sweet lullabies assuaging your childhood fears.

As stated before, the lyrics hint to at least two interpretations. The more straightforward take on relates to the uncertainty in a relationship. Junsu expresses his apprehension over drifting apart from his significant other. From life lessons gained through experience, there are some harsh realities that occur with time spent apart. One such lesson expressed in the lyrics is that as people grow older, their memories aren’t as vivid. And while he honestly expresses that he wishes to grow old with his significant other, he does not deny the reality of the hurdle in front o him. At this point, with time and distance between them, he can only hope for the best:

“I can’t ask you to wait for me

I bite down on my lips

But as if you know what I want

You smile at me.”

But while the ballad functions as a love song expressing his anxiety about an uncertain future, it can also be interpreted as a promise towards his fans. The distance and separation will develop when he decides to enlist, and he hopes that his fans won’t forget him down the line. Junsu comes to terms with the fact that the only sure thing are that things will continue to change with time. However, he extends a hand and offers to continue having that artist-fan connection as long as they are willing to have him. 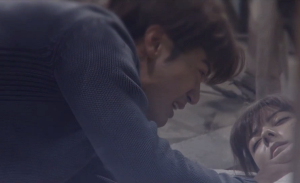 The MV features Fujii Mina and Kim Kang-woo in a post-apocalyptic tragedy. The lighting is important in denoting the time shifts. The way the light is cast on certain objects is telling of what part of the story we are on.

The MV’s time chronology shifts from Kim Kang-woo waking up after surviving the comet impact to the world that exists prior to the comet falling. We are exposed to the complexities of Kim Kang-woo and Fujii Mina’s relationship and realize that those small misgivings are feeble because deep down, they love each other.

The theme of religion is presented in various moments in the video. There is a quote from Revelation 9:6 in reddish black tints that reads “But death will flee from them.” There is also another bit that perhaps hints to keeping the faith as a cell phone flashes “Faith 0920” on it. Later on, there is a lady with a red cross painted over her face holding onto seven candles joined together in one candlestick. Red, black, and blues are the colors that paint the MV, adding to the striking mood and somber atmosphere.

The music video is heartbreaking and more than anything, it correlates with the song through emotional resonance. Kim Kang-woo and Fujii Mina provide this backdrop of love amid tragedy.While the tragedy lies in this complexity of their relationship possibly coming to end — separating these two who have built up their own little world together, there is a hopeful chord at the end of the MV as Fujii Mina, presumed dead, shows signs of life when she moves her fingers. I also found the moment where the old man walked through the destruction holding tightly to the rocking horse to be gut-wrenching — with the rocking horse alluding to the person he may have lost in the destruction. 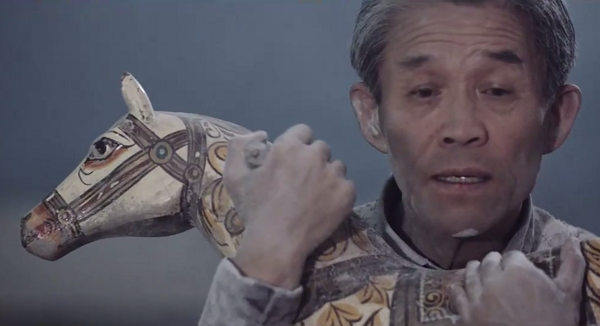 “Yesterday” is steeped in this simplistic elegance that stirs at your emotional core. It is moving in the quiet breaks and fragility of Junsu’s voice. The MV is an epic that gives life to small microcosms of life that survives the catastrophic destruction that batters the planet. Sometimes the CG work does take you out of those moments, but the ambition to tell this story is admirable. The lyrics resonate on multiple fronts as the love story poses a multitude of interpretations. At the end of the day, the MV and song are memorable additions to Junsu’s impressive works. “Yesterday” is a powerful promise to fans as Junsu breathes melancholy into the exposed tendrils of his heart in expressing an honest love that will outlast a lifetime.