The Time We Were Not In Love, Episodes 1-6: Treading Familiar Waters 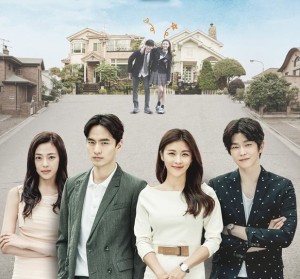 When it was announced that beloved Taiwanese drama, In Time With You was getting a remake in Korea, I was excited at the prospect. The original Ariel Lin and Bolin Chen fronted drama was extremely memorable for confronting the questions of age in relationships and also on the difference between close friends and lovers. The drama also left a cultural impact at the time with people trying to find their own ‘Da Ren Ge’ in the world.

Ha Ji-won (Oh Ha-na) and Lee Jin-wook (Choi Won) both take on the leading roles in The Time We Were Not In Love. With the star power, the drama appeared to be destined for success. However, the production has met its fair share of troubles. There were rumors of turmoil brewing behind the scenes which seemed further validated by numerous production and writing staff changes being made. Shooting the drama is reported to be increasingly difficult especially given these changes keep occurring even in the midst of filming.

Part of me is a bit sad that I’m not enjoying The Time We Were Not In Love as much as I did with In Time With You. Ha Ji-won and Lee Jin-wook both have great acting chops, but somehow, their characters don’t necessarily elicit as much depth as their counterparts did in the original. There is a more introverted nature to how You Qing (Ariel Lin) in In Time With You dealt with her relationship anxieties and philosophy that is not well translated in The Time We Were Not In Love. Oh Ha-na instead has an aloof style that doesn’t make her the most engaging character on screen which is troubling considering she is one of the leads. Instead, the most reflective moments feel disingenuous and more of a product of societal pressure. While You Qing largely reflects on how she will be able to find love at her age and with her career ambition, we only get surface level glimpses in the Korean counterpart, which come from Oh Ha-na’s family members, coworkers and friends. 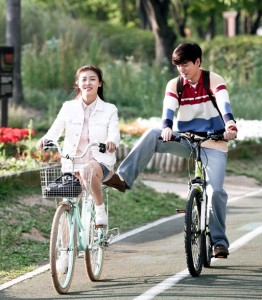 That’s not to say that Oh Ha-na doesn’t bring up these questions herself, but there is a general feeling that the brunt of the anxiety isn’t of her own inner turmoil but rather something built up from those around her.

This is especially apparent in the fantasy sequences that were typical of the original. Those fantasy sequences delve into the psyche of You Qing and invite the audience into her own intimate subconscious that she hasn’t fully sorted out yet. In contrast, the fantasy sequences in The Time We Were Not In Love are used to limited effect and only serve to reinforce what we know instead of presenting the whirl of confusing emotions that they have to sift through.

Probably another symptom of the production changes is the editing and costuming not being up to par. The flashbacks to their high school days don’t do enough to distinguish the past from the present. Sometimes, the editing will use a bordered transition to shift between time periods but there are sequences that move on to a different scene in the present without a transition, which takes me out of the moment and adds confusion about the timeline. This wouldn’t be as big of an issue if the costuming and staging was more effective in characterizing the past and present. Ha Ji-won and Lee Jin-wook aren’t immediately identified as either high school Ha-na and Won or present day Ha-na and Won. Other than occasionally wearing glasses and slightly different clothing styles, their appearances at times blends into the present. 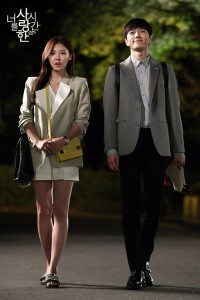 Also, Da Ren and You Qing originally had long talks while drinking beer on a mountainside. These were scenic and represented how they had their own little space amongst the hectic pace of the city. In The Time We Were Not In Love, this is changed to a rooftop on a building — given the lack of many mountains in the city. The location is effective — not necessarily as private as the original — and creative given the differences in geography.

One change I had to raise my eyebrows at was L’s character Ki Sung-jae. In the original, Nic operated similarly to L. He used his charms to mislead the main protagonist, so he could gain some power in the workplace. While this was aligned, the fact that the writers omitted Sung-jae’s sexual orientation — in which Nic was written as a homosexual character in In Time With You — made me question whether the writers were attempting to stick true with the adaptation or simply taking the bare bones.

The Time I’ve Loved You has had its fair share of drama behind the scenes. To say that the production hasn’t been affected would be false. The writing and quality has certainly fell off from the start. The dialogue doesn’t pack as much of a punch, and there isn’t a good enough balance between humor, romance and exposition. So far, the action seems to be idling and the character progression falls stagnant. Hopefully, the introduction of Cha Seo-hoo (Yoon Gyun-sang) as Oh Ha-na’s second love interest will add more spice to the so far dull taste of the drama.