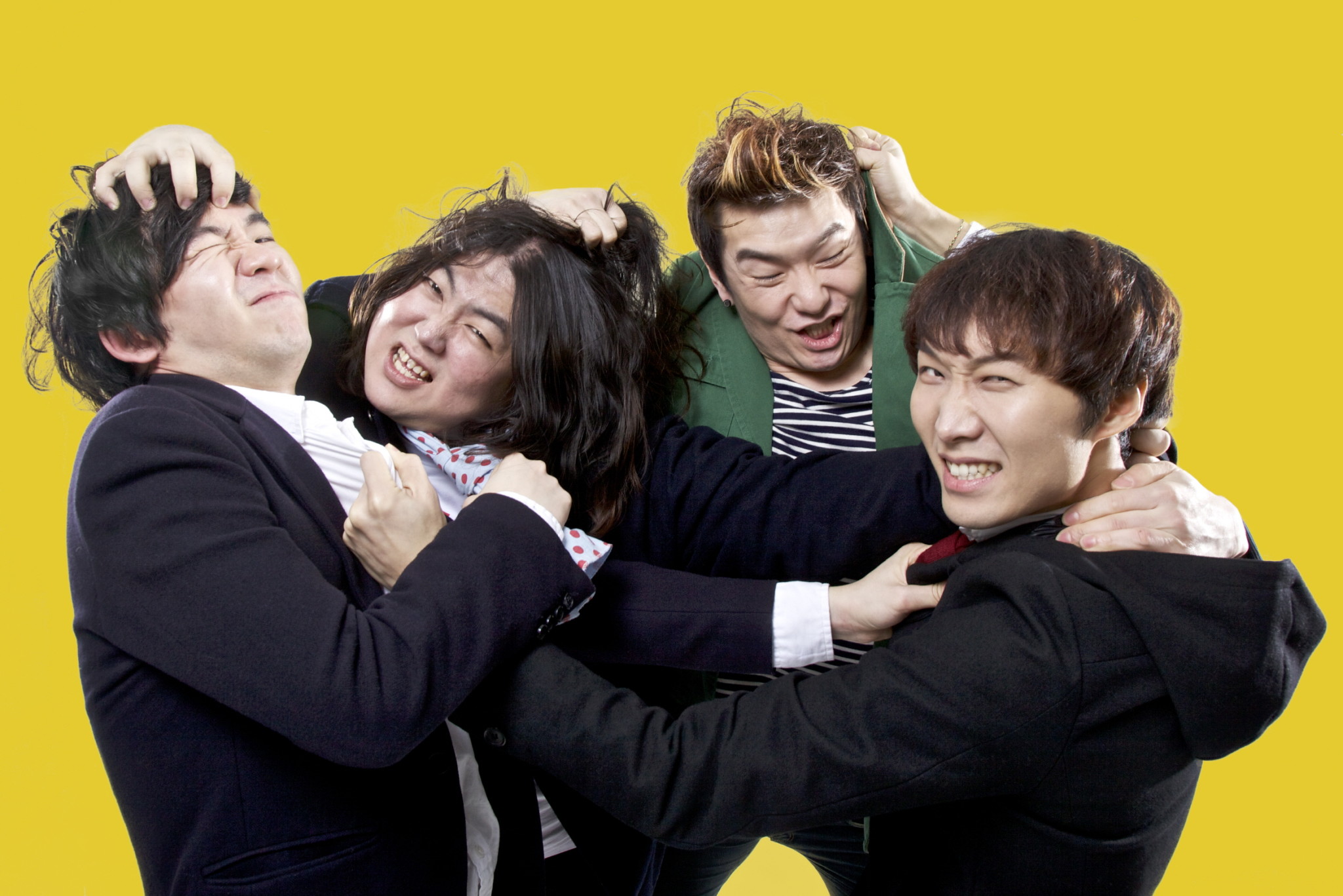 I first came across South Korean rock band Rock ‘N’ Roll Radio last year and instantly fell in love with their debut album Shut Up and Dance, a high energy dance-rock album that’s sure to get your body moving to the beat.

The critically acclaimed album has delighted fans everywhere and led to nominations for both “Modern Rock Album of the Year” and “Modern Rock Song of the Year” at the 2014 Korean Music Awards. Shut Up and Dance even launched Rock ‘N’ Roll Radio’s overseas presence with an invitation to perform at South by Southwest (SXSW) in 2014.

Shut Up and Dance is a phenomenal debut album, and I couldn’t stop listening when I first got it. It has set the bar high for a follow-up album. Have you started working on your next album yet? If so, can you tell us anything about it?

Jin-kyu: Thanks for the kind words! We’re actually preparing to record a new EP now. We’re going to France in June to play at Midem Festival in Cannes and do a few other gigs. And while we’re there, we’re going to record the EP in Paris. Romain Tranchart from Modjo and Gregory Louis from Aloud will work with us as producers. I think working with them will make our sound better. We think this EP will be really good! It will be much more danceable, too.

Min-woo: We’re always trying different things with new songs. For our new EP, the tracks are going to be more rhythmical and electronic sounding. 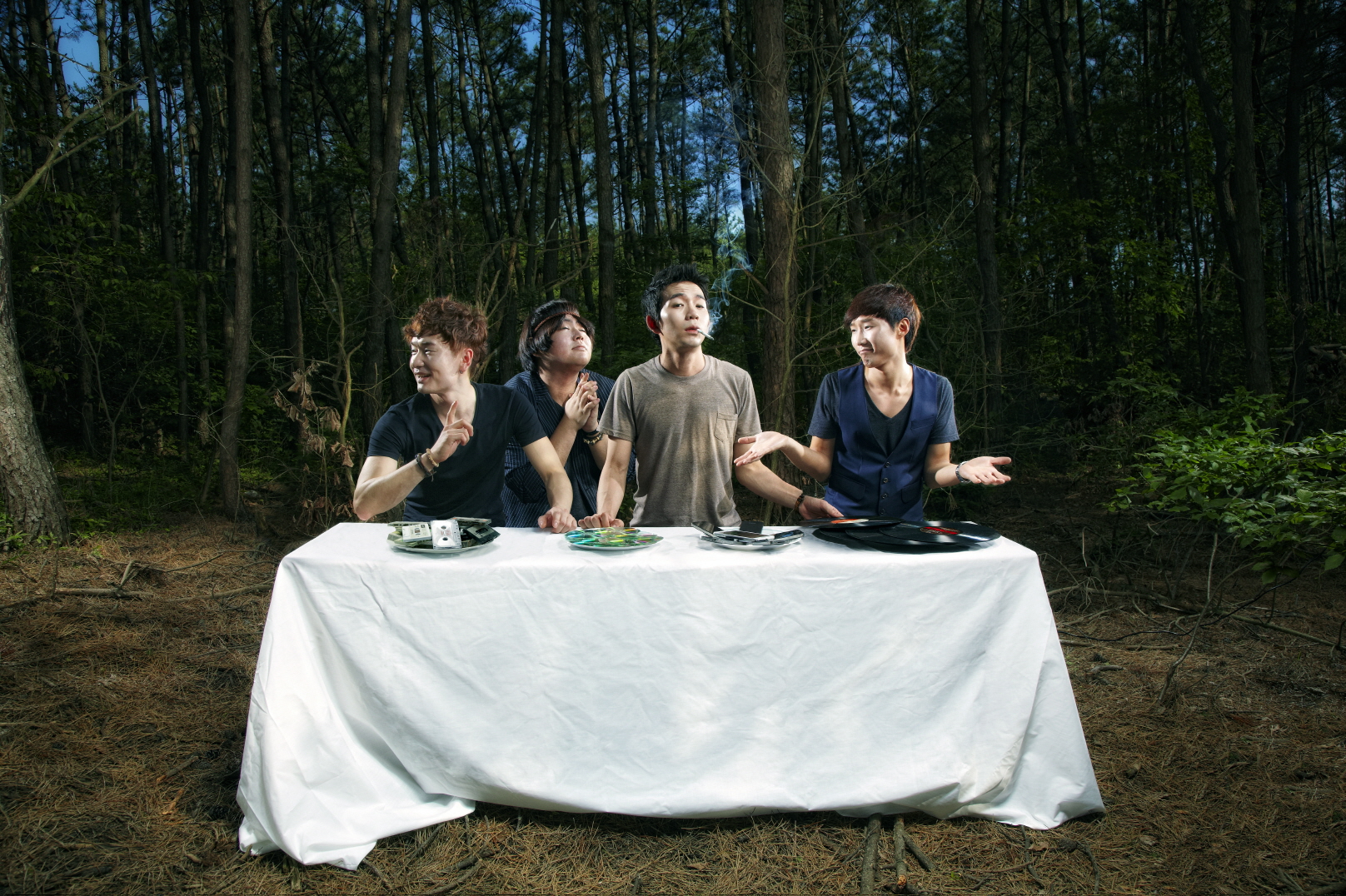 How did the band begin?

Jinkyu: I knew Minkyu and Minwoo from elementary school and went to the same high school as them, too. We’ve played together since then. We were all also technicians for a famous Korean rock band called YB, and that’s how we met Naehyun. Minkyu, Minwoo and I were in a band called Go-Go Beat with another guitarist. And Naehyun was the singer in a group called Anti-Roman. Naehyun and I both got fired from our bands around the same time, so we made a new group called Burning Flowers. We were working on a demo, and I ran into Minkyu and Minwoo at a friend’s wedding and let them listen to our demo tracks. They suggested working together again and that led to the start of Rock ‘N’ Roll Radio. Actually, Rock ‘N’ Roll Radio was named after a Go-Go Beat song.

Min-kyu: Go-Go Beat found a new guitarist after we fired Jinkyu, but that guitarist left so it was only Minwoo and me left in the band. We liked what we heard on the demo, so I suggested to Jinkyu that we work together again.

Min-woo: That happened back in March 2011. We all got day jobs to buy equipment and started writing songs in October 2011.

Do you usually write lyrics or compose music first?

Jin-kyu: We jam together to make new songs. And after that we write lyrics for the music. 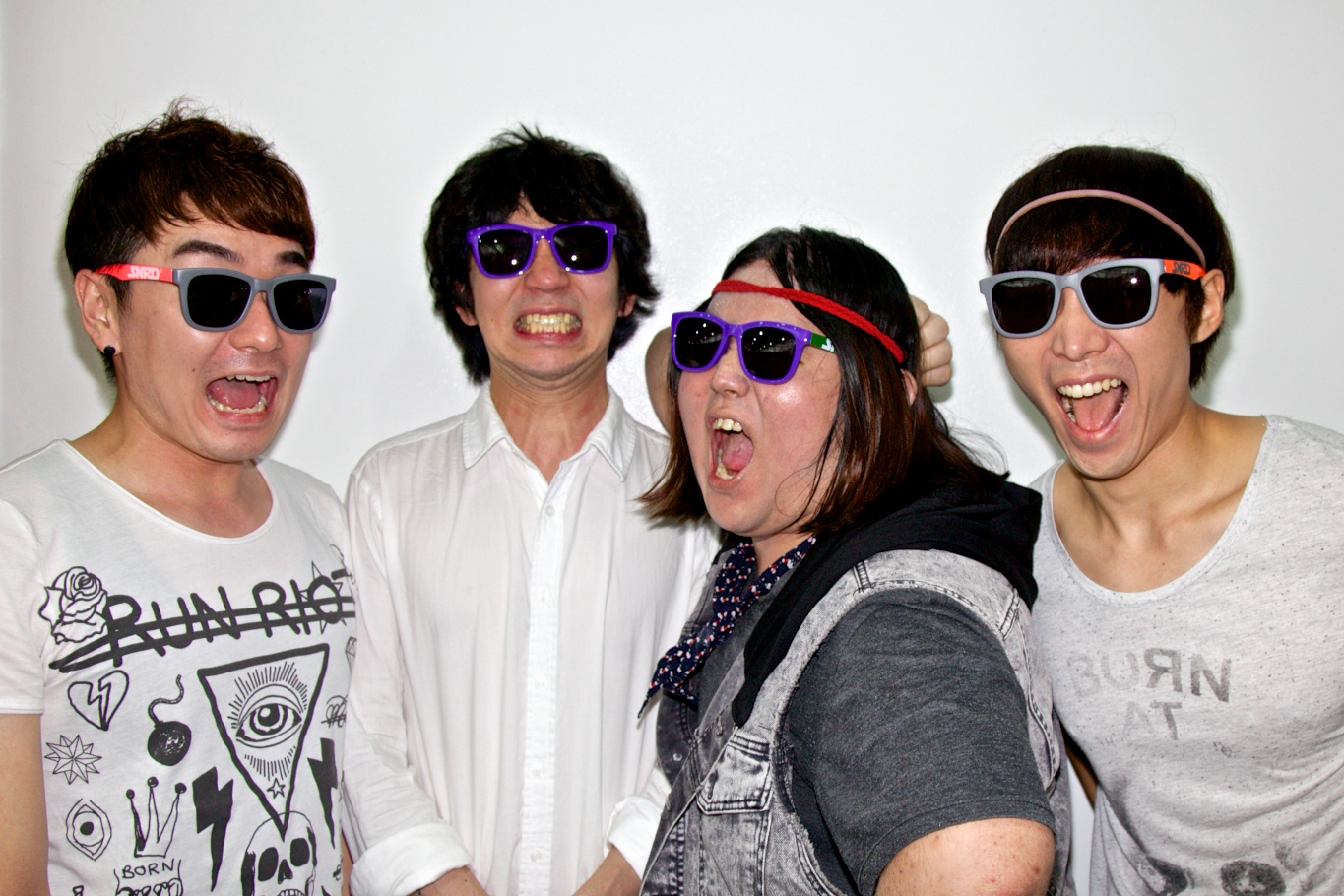 Where do you find inspiration?

Jin-kyu: I find inspiration from everything and everywhere around me. It could come from something I saw while riding the bus, watching a movie, listening to music, having a conversation with a friend, etc. And I write songs by playing and remembering those things.

Min-kyu: For me, I get inspired by listening to lots of music and watching other drummers perform.

A lot of the lyrics on the album seem to be about breakups and being lonely. Were the lyrics based off any personal experiences of the members?

Jin-kyu: Usually Naehyun and I write the lyrics. When writing lyrics we draw from our own experiences and our imagination. For example, I wrote the lyrics for our song “Red Lip.” I had just broken up with someone and used my feelings from that for the song. But the song “Neverland” came from my imagination. That came from me starting to think about what it would be like if Peter Pan was real.

What is everyone’s favorite song to play?

Getting invited to play at SXSW is a huge honor. How did it feel to play there?

Jin-kyu: It’s true that it was a huge honor. We’re so grateful for being given the opportunity to play at such a renowned event. SXSW was our first time playing in the US, and we were pretty nervous beforehand because we can’t speak English well, and our lyrics are in Korean. But people reacted really positively to our music there, and we learned that good music and playing can be appreciated by everyone – no matter what language they speak. That was a great lesson for us.

Do you have any memorable experiences from touring that come to mind?

Jin-kyu: We played in New York last year for CMJ. New York was a very impressive place. It seems like the city is full of so many different people with different stories to share. It was cool to experience that. But I wish we could have checked out more live venues when we were there.

Rock ‘N’ Roll Radio’s music is appealing even to people who don’t normally listen to rock music. Is the crossover appeal of your music a surprise?

Jin-kyu: Not really. We listen to a lot of different types of music, and this helps us when we make songs. We mix the good parts from all the different stuff we listen to when making music as Rock ‘N’ Roll Radio.

Nae-hyun: I was a metal kid growing up so I don’t think there’s anything difficult or unappealing about our music at all. Actually, I think there is no difference between our music and K-pop. People keep calling us K-rock or K-indie, but I want us to be K-pop idols! 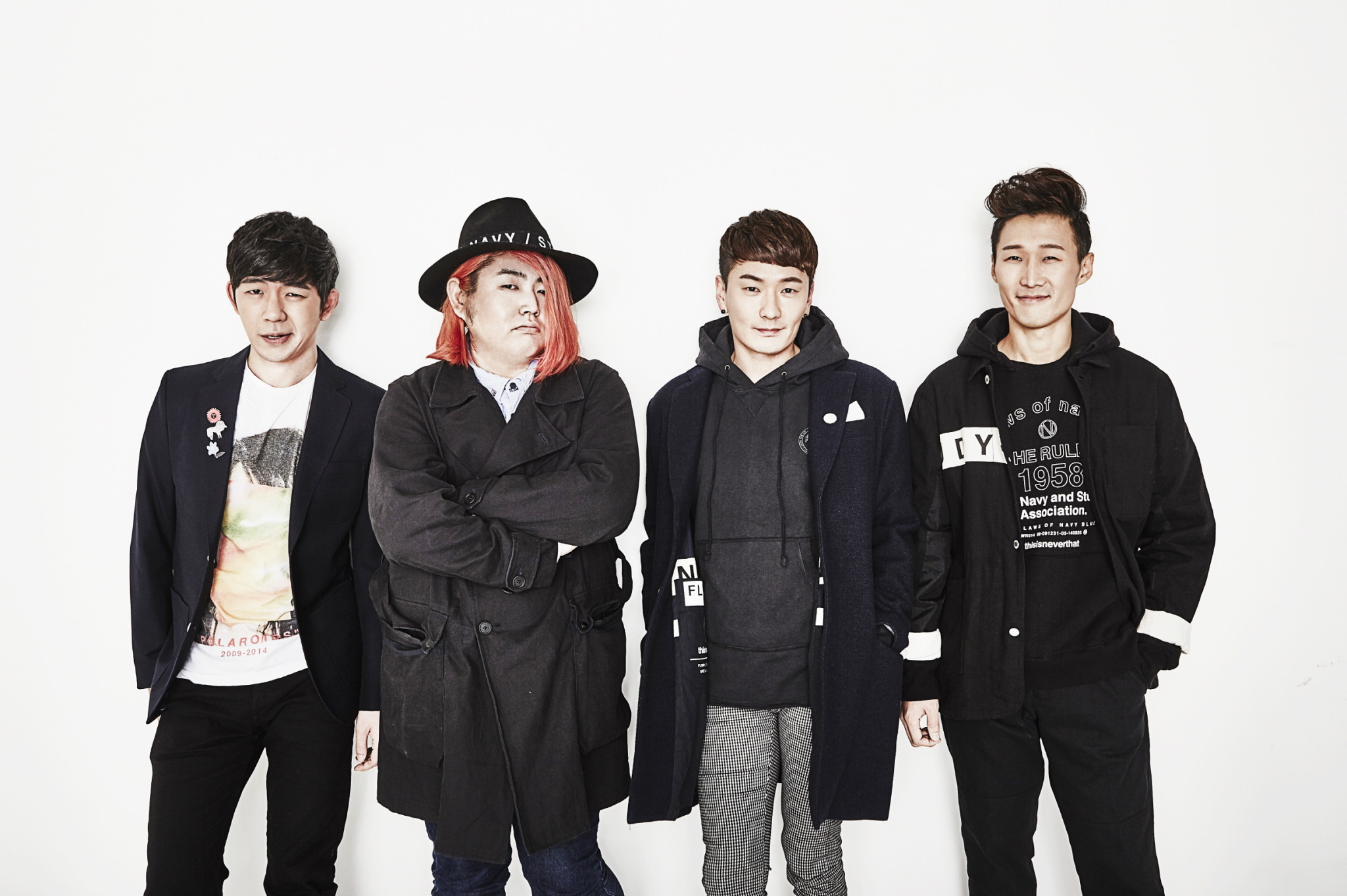 Rock ‘N’ Roll Radio has received many accolades since the band has first begun. What do you, as artists, define as success?

Jin-kyu: I think success for an artist is to be able to keep making art until you die.

Min-kyu: Being able to keep your own sound and style but still getting popular.

Nae-hyun: Before Rock ‘N’ Roll Radio we all played in other bands for several years. But Rock ‘N’ Roll Radio is the first time we’ve ever received any kind of recognition. It was great at first, but after two or three years of receiving praise our lives haven’t changed at all. I think we should be more popular and be making more money. Unfortunately, being critically acclaimed alone doesn’t give bands any money. So I define being successful as the point when people are willing to buy the art you’re creating. With music, I think this means not only paying for it but also enjoying it at the same time. Moving forward, I hope more people are willing to buy our music and have fun with us at the same time.

What would you like to accomplish within the next three years?

Jin-kyu: We’d love to do bigger shows in Europe and the US and play at fests like Glastonbury and Coachella.

And a few questions just for fun! What is everyone’s favorite food, both Korean and non-Korean?

Jin-kyu: We all like dwaeji gukbap, which is a pork and rice soup.

Min-woo: I think samgyeopsal is the greatest food in the world!

Nae-hyun: I love all Korean food. And I like Chinese food, too. 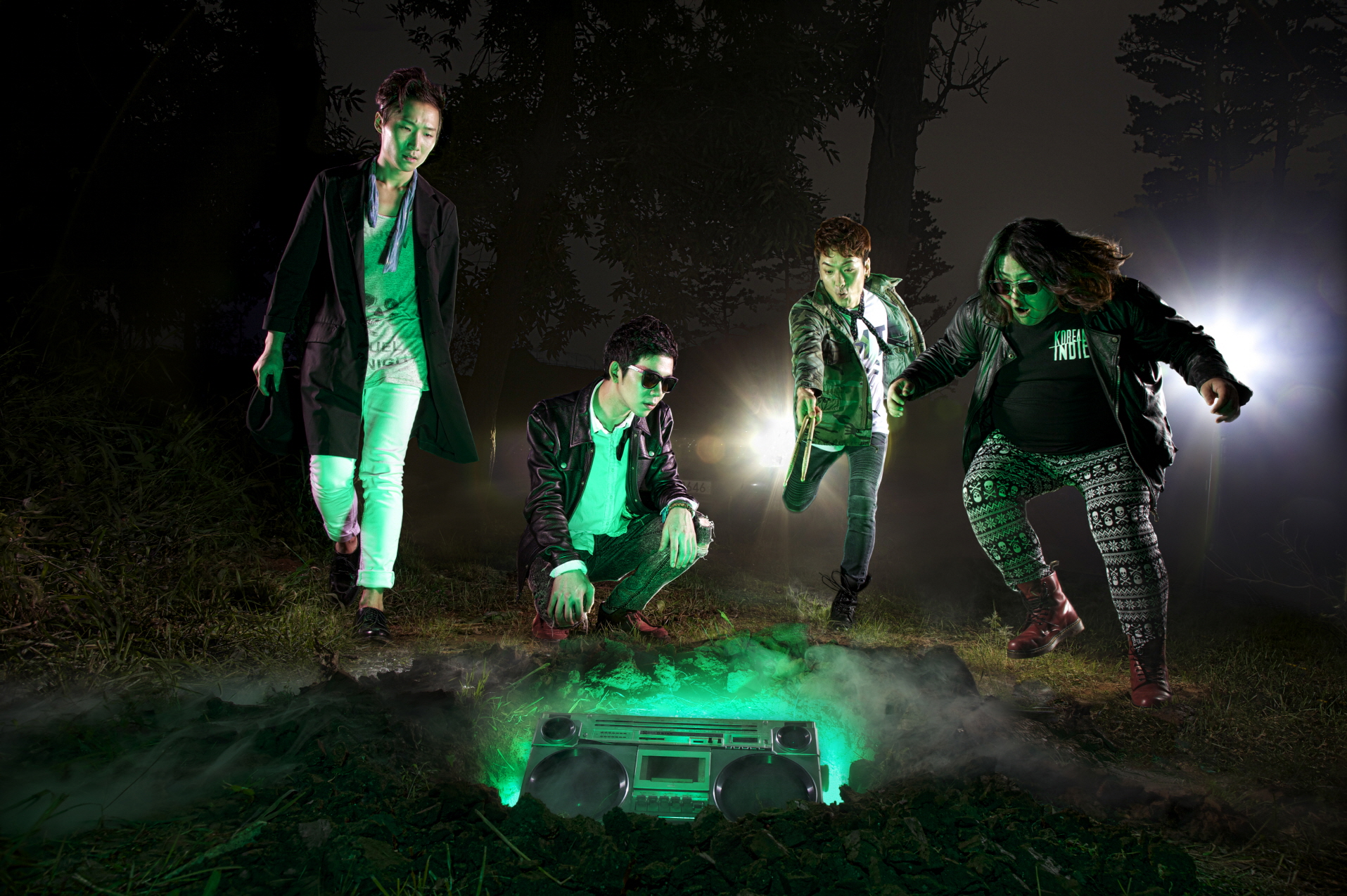 What is everyone’s favorite K-pop group?

If you had to switch bodies with another member for a day, who would it be and why?

Jin-kyu: I don’t want to switch bodies with anyone. I like being me!

Min-kyu: I want to change with Naehyun. I’m curious about how much he practices and how he can be so indifferent to different surroundings.

Nae-hyun: I don’t want to change with anyone. I’m the talent member and have the longest legs. I like that!

For a chance to see Rock ‘N’ Roll Radio live, catch them in France at the following dates:
June 6 in Cannes, France at Midem Festival
June 11 in Saint-Étienne, France at Thunderbird Lounge
June 15 in Paris, France at Le Buzz

If you can’t make those dates, check out Rock ‘N’ Roll Radio on Soundcloud, iTunes, or enter our giveaway for the chance to win a signed CD! Comment below with your favorite Rock ‘N’ Roll Radio song and how you were first introduced to the band. Get your comment in before June 17th!