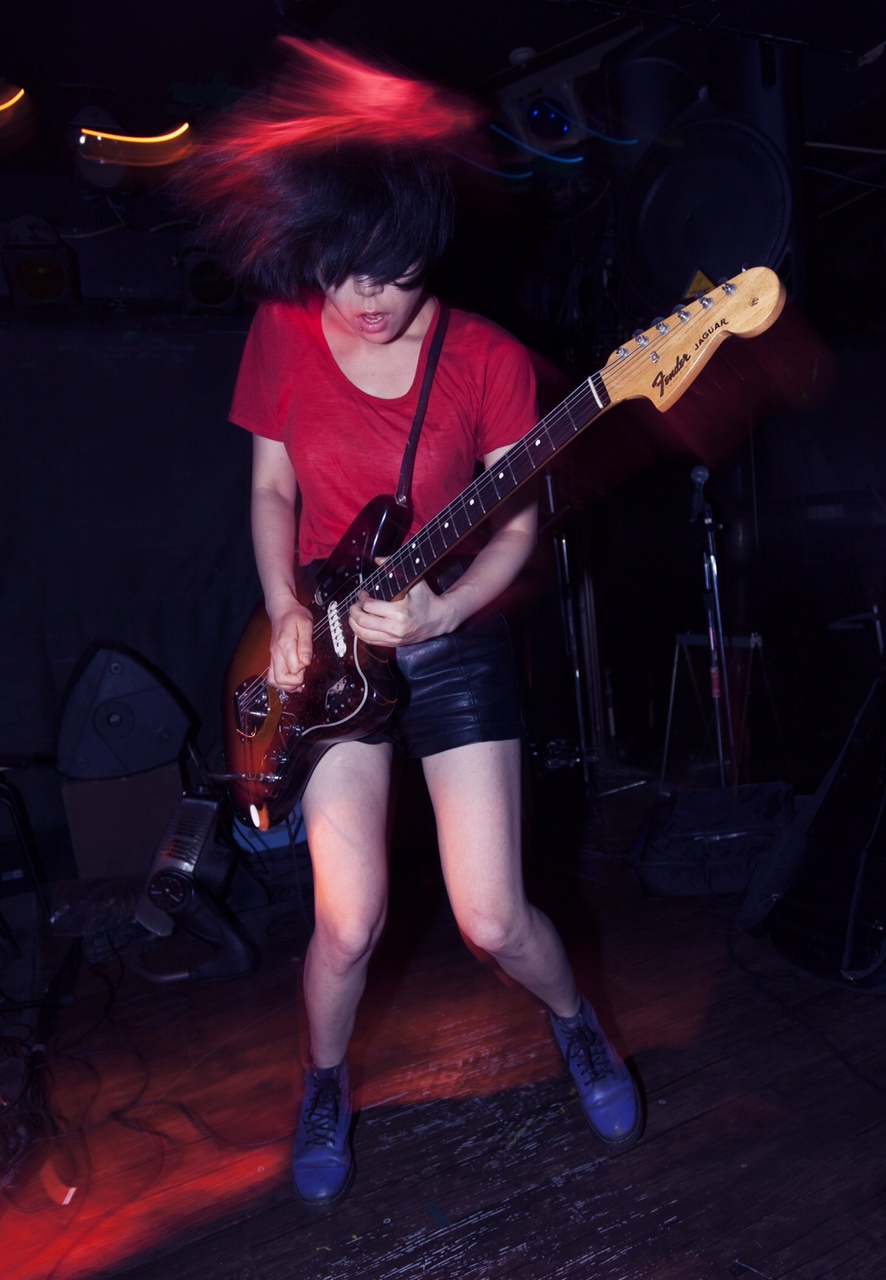 Seoul’s underground rock scene has been growing for decades, and the diversity of bands present has led to a fusion of sounds. Psychedelic noise-rock is Juck Juck Grunzie‘s specialty, and the description perfectly encapsulates their dark and fanciful sound. With a blend of guitars, drums, synths and the occasional accordion, Juck Juck Grunzie weaves an otherworldly musical journey throughout their first full-length album Psycho.

Beginning as an all-girl band in 2007, Juck Juck Grunzie debuted at a Nirvana tribute show. They made a name for themselves over the next three years due to their unusual outfits and abrasive post-punk sound. With the addition of a bassist in 2011, Juck Juck Grunzie played at various festivals, embarked on international tours and were even featured as one of the central subjects in Vans’ “Off the Wall” documentary about South Korea’s indie scene.

Starting out as an all-girl band, did you face any challenges in the music industry due to your gender?

Ah-reum: I’ve been in this band for over seven years, and at first we got a lot of questions like ‘Oh, you guys are all girls, do you have a hard time because you are female?’ because when we started we were an all-girl band. But we really didn’t have any trouble with that because we were not that famous.

Now we are still not that famous, but we have a lot of experience as a female band. Something that is really hard is that in Korea, rock band fans and all consumers of culture — musicals, plays, shows, whatever — are female so success depends on their taste.

If you are a little boyish, you can have more fans. If you are feminine, they [female fans] don’t like you as much, or if you are really feminine, then boys love that kind of role. All over the world, there is fandom culture, and in Korea, it is really big. So even if you are in the band, they choose one member to be a fan of.

And it’s a really conservative society in Korea so men think we are really, really scary. So it was hard at first, but now it’s fine, to me. I think all these kinds of phenomena are really interesting.

This article describes Juck Juck Grunzie as “feminist rebels.” Do you find that label accurate or burdensome?

Ah-reum: I don’t define our band as a feminist band. It wasn’t on purpose at first. We just make music, and we wanted to have a female band because there are mostly boys [in the rock scene]. So it could be feminist thinking, but it was not on purpose.

But after all those experiences and seeing those interesting phenomena, we’re still not [thinking,] ‘Oh, we have to do this because we want to help change things,’ but if we can, that’s fine; it depends on the context. I feel it’s kind of burdensome, but nowadays I don’t really mind.

Juck Juck Grunzie has played in a lot of different outfits from soccer uniforms to lingerie and pajamas. What started this trend?

Ah-reum: Our first show was a Nirvana cover show on Kurt Cobain‘s birthday, and we played “Hairspray Queen” with lingerie because he wore lingerie for that. So we chose to wear that for fun. The soccer uniforms and everything is actually for fun.

At the first show, I found that I could be a different person with a different outfit. I’m really shy, and I like to be alone, but after changing my clothes, I feel like I can do “crazy woman” and other personas. I want to make the audience have fun. 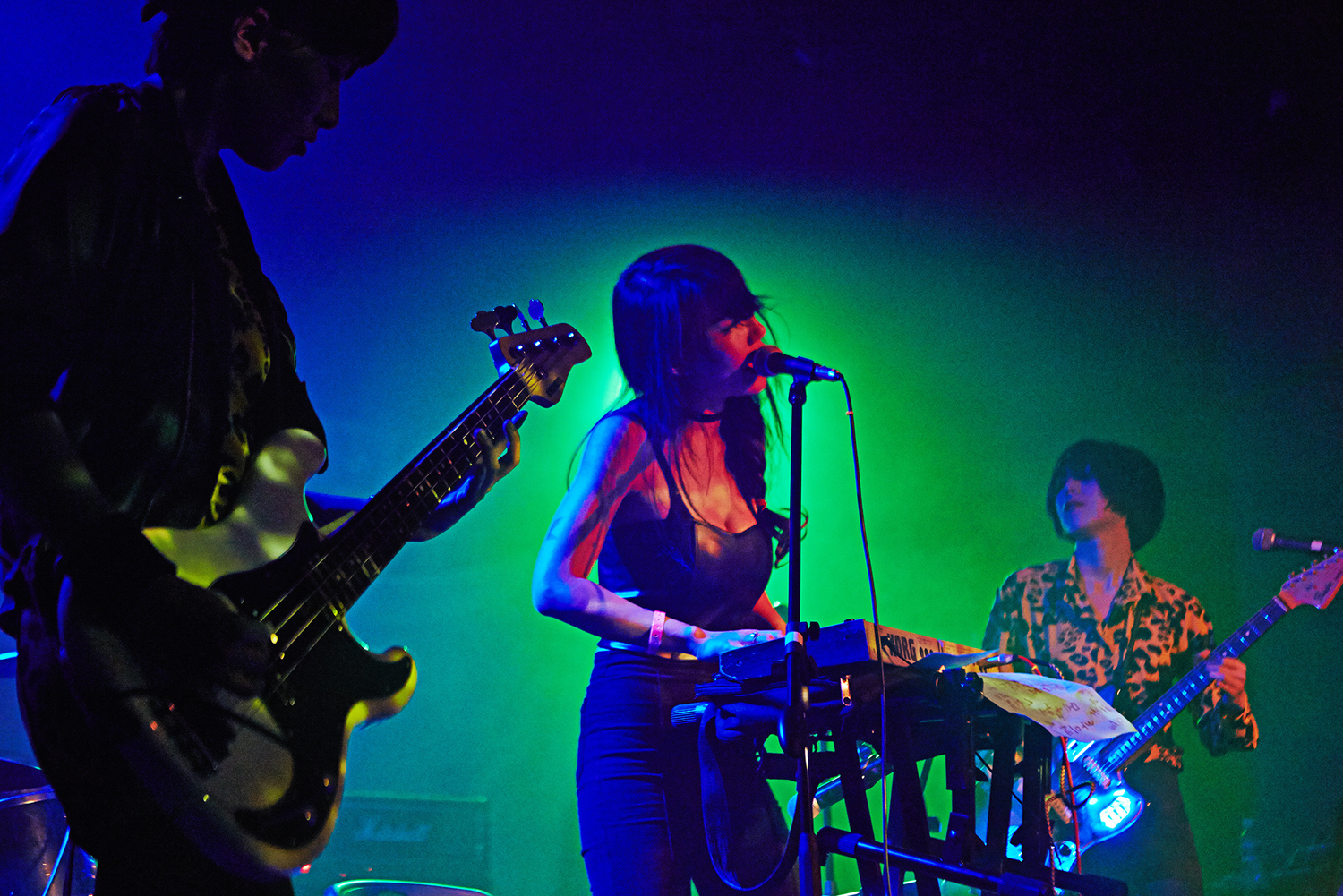 Which outfit has been your favorite?

Ah-reum: The lingerie because it was my first experience on stage with the members.

With noise-rock, there is a larger focus on instrumentality. How does Juck Juck Grunzie go about composing the music for your songs?

Juck Juck Grunzie’s lyrics are mostly in English. Is that a stylistic choice for the band?

Ah-reum: We have English lyrics and some Korean lyrics. Korean lyrics are usually written first, not with jamming, while English is written while jamming. I make sounds while singing and then listen to an iPhone recording — we record while jamming — and then [we say,] ‘Oh, this sounds like this, and it fits this jam/sound.’  I try to make the lyrics phonetically, and English has a lot of onomatopoeia. So sometimes English, sometimes Korean. If I can speak some Japanese, and it fits with this music, then I will use that. 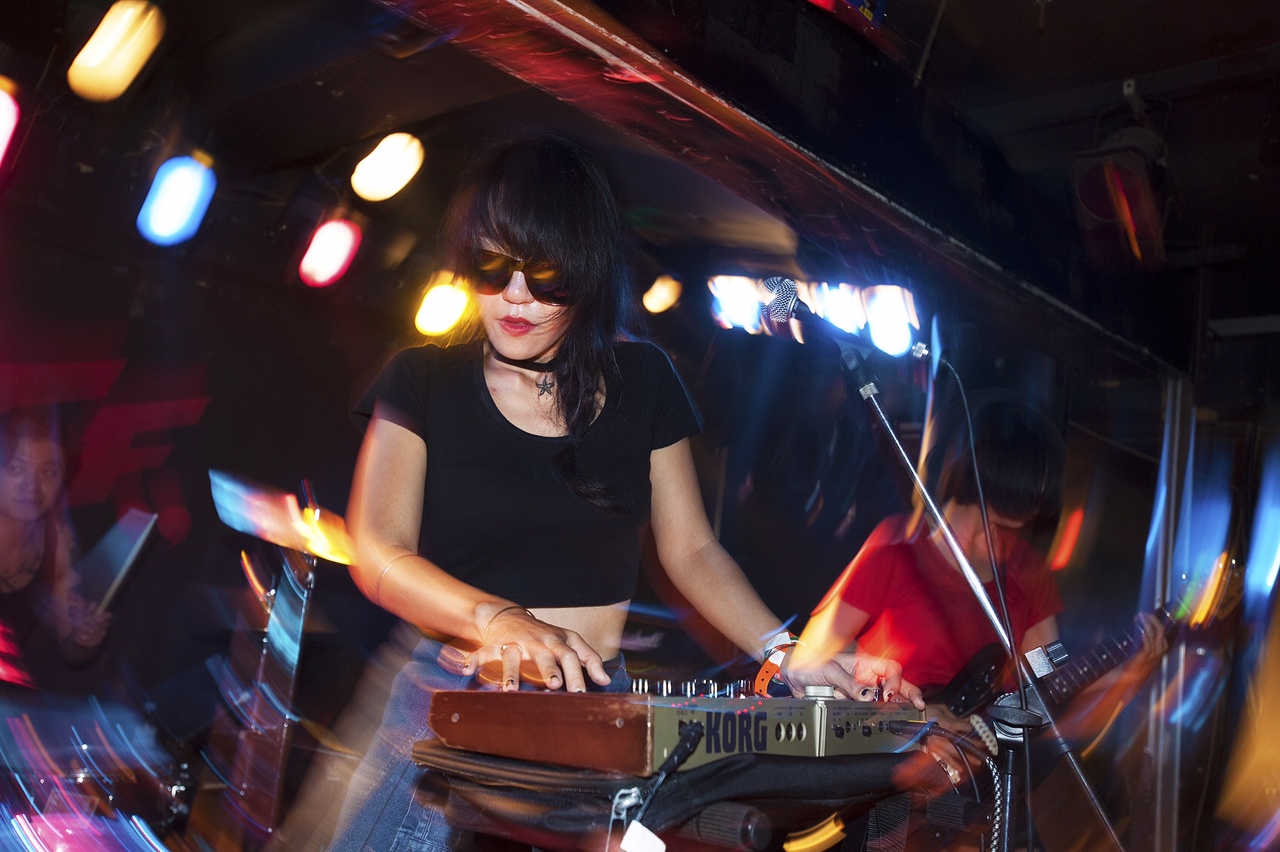 So you’re more focused on how the lyrics fit into the music than the opposite where some bands create music based on their lyrics?

Ah-reum: Sometime we write lyrics first. But usually we jam first, and I like it because it’s based more on instinct — I didn’t think, I didn’t plan, I just feel.

How did the experience of recording the album Psycho differ from recording your EP Sound Checking?

Ah-reum:Sound Checking we recorded in a venue; it’s a live EP. Psycho was almost live in the studio. So it was the same process but different space. We learned from that recording [of Psycho] because we are not satisfied with that sound. We have so much sound that it’s hard to record, but we didn’t think that it would be different from a live recording. But it is really different, and we needed a different layer of sound so maybe next time we will try [a] more spontaneous sound on the album. I can say definitely that our show is better than our album, much better. (laughs) Everyone says that, even my sister who doesn’t really know music.

Are you currently working on the next album?

Ah-reum: We are working on the songs, and after touring we will plan for it. We plan to have the next album by next spring (spring 2016).

Ah-reum: When I was 20 years old, I practiced and learned at an arts education center.

Was that your first instrument? 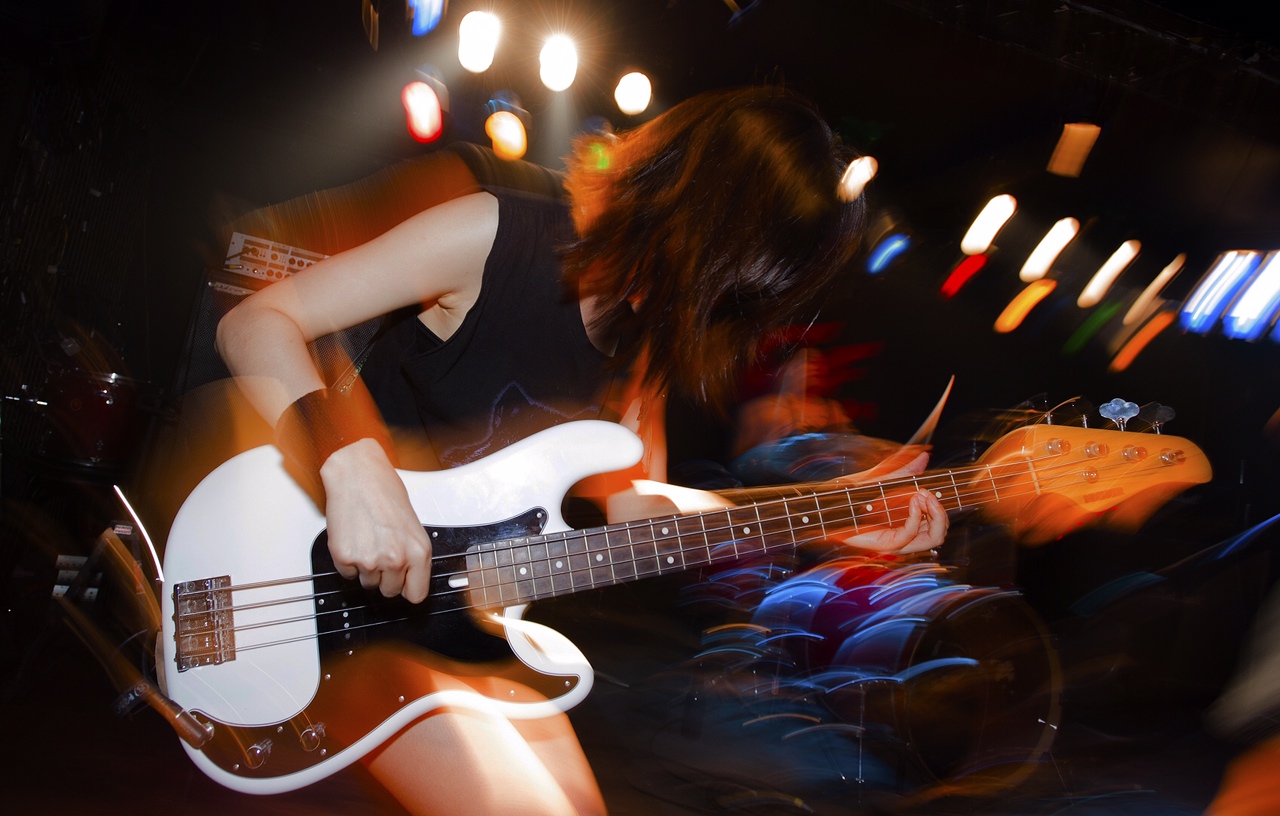 Are there any other instruments you’d like to incorporate into Juck Juck Grunzie’s music?

Ah-reum: Nowadays, I really dig DIY-style instruments. I study media art in school so, hairdryer or machines, you can make that into sound. I am trying to study that and put those kind of instruments in our music.

Your upcoming European tour covers the UK and Germany. Is there any place in particular the members of Juck Juck Grunzie would like to play, both in Europe and elsewhere?

Ah-reum: I don’t know where the others want to play. I’m open to everywhere. I want to experience every place!

For someone who has never heard your music, what song would you recommend to introduce them to Juck Juck Grunzie?

Ah-reum: “Psycho.” I think “Psycho” is characteristic of our band. And I like “Dream Like a Dream.”

Your song “Ah” is very different from the rest of the album. How did you guys come up with that song?

Ah-reum: I made that song. I made the loop by myself without the members, and then we edited together.

Last question: What is your favorite song to play live?

Ah-reum: “Walking In a Dream.” It has a special beat, and then after that we all play together. There’s some action, and we all get into it.

Catch Juck Juck Grunzie at a live show in Europe at the following dates or enter in our giveaway to win a signed CD!

To enter the giveaway, tell us your favorite song in the comments below! Giveaway ends Saturday, June 20 at 11:59PM EST.