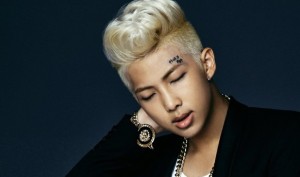 The much-anticipated, much-teased solo debut of Rap Monster has finally hit the internet, with his first solo MV for “Awakening” blazing a new trail for the boy band member. We recently caught a glimpse of Rap Monster’s abilities in his collaboration with Warren G for “P.D.D” but with “Awakening”, Rap Monster truly holds his own.

“Awakening” immediately pulls you in with a melodic backing track that loops throughout the song. Rap Monster doesn’t waste any time, immediately launching into his rap. “Awakening” is more than just a new way for Big Hit to cash in on their talented members; The song declares that Rap Monster has awakened and been reborn, and will now prove his status as a rapper.

The song follows a common theme that shows up in a lot of Rap Monster’s writings — to establish himself as a legitimate rapper and not just a heavily made-up idol rapper. In “Awakening,” Rap Monster embraces the title of an idol rapper, refusing to let it be a negative slur that holds him back. The song is an obvious retaliation against the likes of B-Free and arguably, Bobby, who have either directly challenged Rap Monster or generally suggested that idol rappers are less worthy of recognition than underground rappers.

Rap Monster in particular has faced accusations of selling out, as he began as an underground rapper and eventually joined the idol group Bangtan Boys. In this way, Rap Monster’s solo release is crucial for establishing himself as a legitimate rapper, lyricist, producer and songwriter, and his passion for his craft is strikingly apparent through his words.

The lyrics are a poignant reminder of everything Rap Monster has gone through in the rigorous idol life and challenging landscape of hip-hop. He recalls the sleepless nights and the broken friendships he went through to achieve his goal. Rap Monster describes his journey in the industry as he raps:

Every night inside me I quietly fight with myself
My heart pounds, my colleagues stab me in the back
while saying that I became a moron after joining a company
Yeah f*ck you I’m an idol, yeah yeah I’m an idol
At one time I hated it but now I love to get that title

Rap Monster’s logic is that you have to embrace the negative labels others try to place on you, to turn it against them. Rap Monster is relieved to tell the listener that he is now marking his “second birthday,” signalling that he now looks at the world with a new sense of clarity and acceptance.

The first verse is repeated twice at the end of the song, signalling that Rap Monster still has vulnerabilities and concerns:

In the moment of my failure
will someone hold my hand?
In the moment when I come down from the stage
will that person be next to me?
Just tell me that I can survive
in this cold world, just feel my vibe

Despite his worries, he trusts someone will be there for him, as he finishes up with the reassuring assertion: “I know one day at a time, the sun gon’ shine.”

The song is heavily focused on Rap Monster’s rapping rather than on instrumental flourishes, however, the backing track provides a catchy, continuous beat. About midway through the song, Rap Monster begins to harmonize over the track, adding a haunting element to the sound of the song.

Rap Monster’s flow is a test of endurance, as he relentlessly keeps spewing out his lines and seems to barely stop for breath. If anyone ever doubted his ability to rap, this song sets things straight. He lives up to his title by frantically rapping, managing to criticize his haters both through his lyrics and his rapping ability.

The symbolic nature of the video ties into Rap Monster’s overall theme, but is simple enough not to distract from the substance of the song. Glimpses of fire and sudden cuts add to the intensity of Rap Monster’s lines. From the very beginning, his face is bandaged — the bandages are restrictive and hide Rap Monster’s true character, possibly an indication of the idol life, which often prevents people from showing their individuality. Then, the disturbing image of the bandaged face on fire is repeated again and again in the MV, either as an indication that Rap Monster is trying to destroy the negative elements of being an idol, or that the idol life is capable of destroying a person’s individuality. 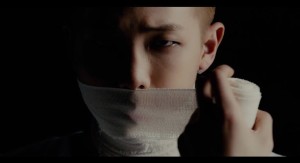 The MV resolves this dilemma at the end of the video, when Rap Monster’s face is finally unbandaged, slowly, making the audience anticipate the result. This scene is reminiscent of seeing someone come out of the operating room after plastic surgery, unraveling the bandages, eager to see their new self. This is indicative of Rap Monster being reborn, and also possibly a slight against the K-pop industry and its encouragement of surgically-gained beauty.

“Awakening” is a great appetizer for the rest of Rap Monster’s mixtape, which has just been released. Intense, frantic raps, soulful music and meaningful lyrics have now become emblematic of Rap Monster’s music, as the young rapper keeps going from strength to strength.