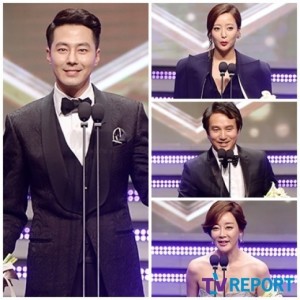 The 2014 APAN Star Awards at the 2014 Daejeon Drama Festival kicked off the end-of-year awards season with a star-studded red carpet.

It’s Okay That’s Love was also another big winner at this year’s awards. Jo In-sung bagged the coveted Daesang (Grand Prize) Award for his portrayal of an obsessive-compulsive writer in the drama. Meanwhile, there were plenty of cheers from EXO fans as D.O won the Best New Actor Award. Lee Kwang-soo rounded out the bunch with the Popularity Award, a joint win with Jin Se-yeon (Doctor Stranger). 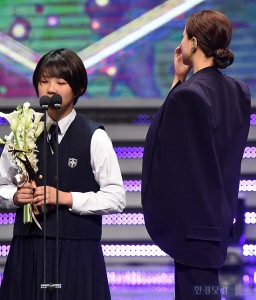 Other winners at the 2014 APAN Star Awards included joint winners in the Best New Actress Award Kim Seul-gi and Nam Bo-ra. Park Shin-hye won the Excellence Award for Actress for her role in The Heirs. Best OST went to Ailee (Fated to Love You OST), and the Fashionista Award went to  Ji Hyun-woo and Kim Yoo-ri. Lastly, Hungry Woman bagged the SNS Best Drama Award.

In a night of festivities, there were also solemn tears when the late Choi Jin-sil was posthumously awarded for her years of dedication to the industry with a Lifetime Achievement Award, which her daughter received on her behalf.

All in all, there were a few surprises coming out of this year 2014 APAN Star Awards. First, SBS was the ultimate winner in this award ceremony with a whopping eight awards, significantly more than any other broadcasting stations. The SBS Drama Awards are certainly going to be more cheerful and competitive compared to KBS and MBC. It will be interesting to see the rivalry between You Who Came From The Stars and It’s Okay That’s Love as we see which one will bag more awards by the end of the year. Also, cable broadcasting stations of tvN and jTBC are entering the dramaland competition in a big way. APAN Star Awards, and most of drama awards for that matter, usually tend to be biased toward cable dramas in favor of the big three of KBS, MBC, and SBS but not this time around. It is definitely refreshing to see that cable stations’ relentless push for quality dramas has finally been awarded fairly. Mainstream stations had better watch their backs from now on.

Congratulations to all the winners of the 2014 APAN Star Awards!