Little to No Love for Spica.S's “Give Your Love” 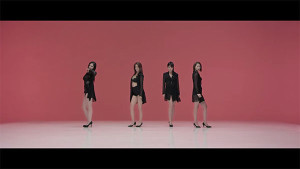 It seems the latter part of 2014 begins the season of office fantasies. Sunny Hill returned with their ode to the work week romance, “Monday Blues,” and now we’ve got Spica.S, the “sexy side” of the powerhouse vocal group SPICA, giving us much face and fashion with their latest MV, “Give Your Love.”

Spica.S (meaning “Spica Special”) is the first foray into subunit territory for the vocal group. However, instead of being a specialty group consisting of only a few of the members, Spica.S seems to be a means for the girls to express their more daring, sensual sides. The only member who opted out, so to say, was Kim Bo Ah, who has taken the time to concentrate on a solo project. B2M Entertainment told fans of the group the “S” is meant to convey the feeling of wanting to show something “more special about the members.” However, given the single and the subsequent video, I’m wondering exactly what we’re supposed to find so special about this permutation of the group.

If the song’s title wasn’t enough of an indication, “Give Your Love” is about a woman whose affection for her lover has cooled. In like fashion, it seems her desire for the ubiquitous male has dwindled from an inferno to the proverbial whimpering flame. Not only has our faceless male antagonist become duplicitous, he’s become something of a crazed obsessive, someone who obviously isn’t happy where he is, but he refuses to let our female lead go in any way: “It would be a waste to give me away, that’s how you feel. You don’t want me but why do you keep torturing me? It would be a waste to give me away, this is your love. Now I know your horrible heart.”

Songs about heartbreak—a dime a dozen. It’s an interesting thing to imagine in the wake of current news about boyfriends who, in one way or another, don’t know how to keep their hands to themselves. But, in the end, the music and lyrical content fall incredibly flat. 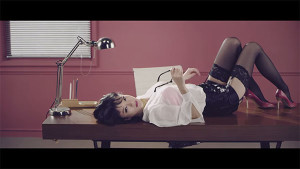 Then we get to the video, whose message veers way off course from the song’s lyrics. The tale is simple: sexy secretary in various stages of (un)dress, batting her eyelashes as she shreds a document, bending over as she reaches for a file that (oops) she just so happened to drop, or how about the old standby—being bent over a copy machine. Of course, what would a sexy office romance video be without a hiked-up-skirt roll around on the desk?

Secretary Chic is starting to become the rage in K-pop, as if the name of the game now is to show an even more mature side to the mature concept. Instead of the jailbait fantasy, we’ve got working ladies who are the male ideal: independent enough to work under a man, but “girlish” enough to sex it up for the boss.

The choreography is much of the same old stuff—some very excited director shouting out instructions, “Ladies, wiggle a little; stick out your butt, and give us a little slow wind to show off them curves. Make sure that sexy is exaggerated for the red-light silhouette. Good, now pout for me. Yeah, that’s it.” Drive the boys crazy, make ’em reach down their pants and swear you asked for it. It’s tired. It’s boring. And just as with every boy band video where we have Casanova ripping off his shirt for the girlies or staring off into the distance to show how “deep” he is, this mess has worn itself real thin.

Now, that’s not to say there isn’t anything at all to take away from this video. The imagery is the same. The idea of “sexy” is boring and worn out. But I will say this, barring the scenes of choreography, these ladies definitely lucked out in the costuming department. If nothing else, the fashion in “Give Your Love” is impeccable. 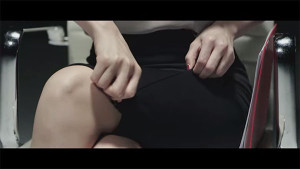 For what it’s worth, toward the end of the video, the ladies seem defiant. The message here looks to be, “Look, but don’t you dare try to touch.” With their vacant stares of sexiness pervading three-quarters of the video, and their seemingly suggestive manner of fulfilling their… secretarial duties, one would think they’re asking for a bit of interoffice kink.

However, what I’m getting as the song wraps up is they’re in control of their sexuality and how far they’ll push it. That doesn’t give our voyeuristic audience the right to touch what isn’t theirs: the ladies zipping the slit of their skirts as if to say back off; ripping pages out of contracts, telling you this isn’t part of their job description; pouring the shredded remains of a document on the floor, saying, “I may be sexy, but I’m not trash.” The symbolism… is a stretch, especially given the choreography of wiggling while walking around in stilettos and negligees. But it’s there for the interpretation if we dare to ignore the first two minutes and forty seconds of the video.

The MV isn’t bad, nor is the song. In fact, both are so hopelessly underwhelming, subscribing to a scale of “good” vs. “bad” seems completely inconsequential. While SPICA will always be on a different vocal tier than their peers no matter what their concept, “Give Your Love” is just another K-pop song and another K-pop music video from another K-pop group so underrated their record company has deemed it necessary for them to follow the completely uninspired trend of stereotypical sexiness to get them recognition. 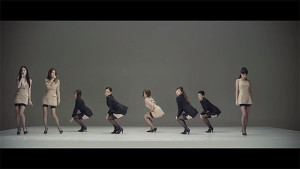 There’s absolutely nothing wrong with expressing one’s sexuality—as has been discussed ad infinitum—especially as a means to garner enough attention to, in the long run, focus on artistic integrity. However, give me something interesting, ladies. Show that your sexuality has power, that you as a sexual creature have agency, purpose, and control. This coquettish charade of pout and pucker, big doe eyes, and affecting retro-risqué choreo that’s neither technically interesting nor even the least bit sexy only demeans your sexuality, making you one in the same with every idealized stereotype of femininity.

I know you don’t have much say, and I know that you want that shiny golden ring at the top of the K-pop ladder. But, my SPICA darlings, there are ways… and there are ways. This is just one way that doesn’t work.